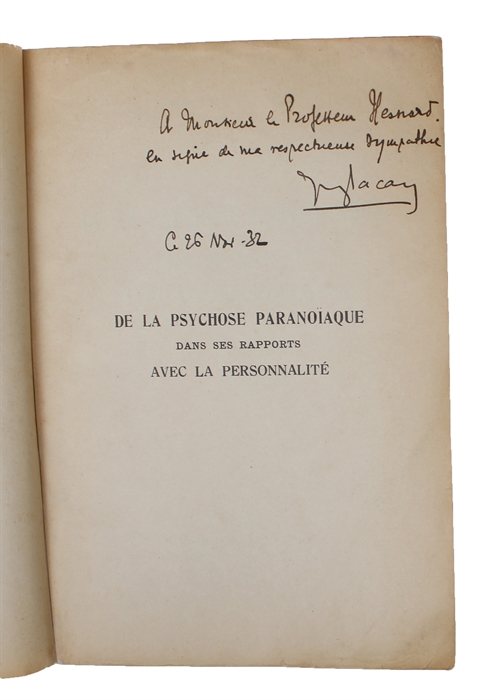 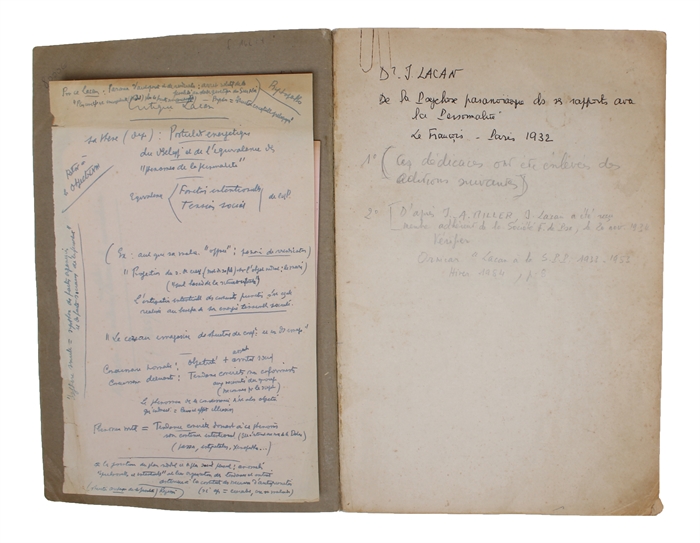 MAGNIFICENT PRESENTATION-COPY WITH AN EXCEPTIONAL PROVENANCE

8vo. Original grey printed wrappers with signs of reading, but overall very good. A bit of wear along hinges (with very neat, barely noticeable professional restoration), a few smaller creases to front wrapper and an old owner's inscription in red crayon. A small closed tear to back wrapper. Many notes and underlinings (by Mijolla - see note below) and inlaid are sevaral leaves with notes. Inscribed to half-title. (14), XIII, (1), 381, (3) pp. Housed in a custom-made blue cloth box with see-through front board and gilt lettering to spine.

Very rare first edition, presentation-copy with an exceptional provenance, of Lacan's groundbreaking doctoral thesis, which constitutes the foundation of all his later work and inaugurated a new era in psychology and psychiatry.

Furthermore, the copy has been in the possession of the important psychoanalyst and historian Alain de Mijolla (1933-2019) and bears his extensive notes and underlinings.

Lacan, who is often referred to as "the most controversial psycho-analyst since Freud", "the father of French psychoanalytical thinking", and a towering intellectual giant of the twentieth century, plays as dominant a role in modern psychology and the development of psychological thought as Freud. It is his doctoral dissertation (the present work) that constitutes the inaugural moment in his work. "Lacan's theoretical engagement with psychosis constitutes a central platform for his ventures into psychoanalysis; from his doctoral thesis on paranoia in the 1930s through to his seminar on Joyce in the 1970s, the question concerning the psychoanalytic treatment of psychosis was at the forefront of his clinical work."

Aimée, Lacan's patient and subject of his thesis, bears the same importance for the history of psychology as Anna O., the patient in Freud and Breuer's "Stydies of Hysteria". Aimée was a thirty-eight-year-old woman, who had tried to stab the celebrated actress Huguette Duflos and was thus imprisoned, in April 1931. The story immediately reached the press, and "Aimée" (Lacan's pseudonym for her) became famous in the whole country. Lacan began to see her one month later at the Sainte-Anne Hospital. Through biographical inquiry, Lacan established a classic picture of her and noticed a development that would come to play a central role in his psychological theory: after three weeks of incarceration, Aimée was almost completely out of her delusional state, which Lacan considered evidence of the acute nature of her paranoia. This connection, which according to Lacan meant that she found consolation only in her punishment, not in the act itself, caused Lacan to propose a new diagnostic category, namely "self-punishment paranoia."

"It [i.e. "De la Psychose Paranoïaque"] took on the importance that had previously been accorded to studies in hysteria in the rise of the international movement. Just as Freud had given hysteria its patents of nobility in endowing it with full-fledged existence as an illness, so Lacan, forty years later, gave paranoia, and more generally psychosis, an analogous place within the French movement" (E. Roudinesco: La Bataille de cent ans, l'histoire de la psychanalyse en France, Vol. 2, p. 114).

With Lacan's doctoral dissertation, Aimée quickly became a cause celebre for the surrealists. In the "De la Psychose Paranoïaque", Lacan also included a selection of Aimee's copious writings, which were produced at the height of her psychosis. This also contributed to the immediate importance of the work and to the spreading of Lacan's novel theories. "Certainly it was this feature which was seized upon by its first surrealist readers, and which gave to this medical thesis right from the start a position in contemporary, even avant-garde thinking, which was markedly different from the usual dustgathering oblivion that is the fate of such work." (Olga Cox-Cameron: Lacan's Doctoral Thesis: Turbulent Preface or Founding Legend?)

"Jacques Lacan is regarded as the father of French psychoanalytical thinking. He trained in mainstream psychiatry and his doctorate thesis was supervised by Gaétan de Clérambault. After the Second World War he became a cult figure in French intellectual circles, mixing Freudian ideas with social comment. As with many French intellectuals, he founded an ephemeral one-man movement with many followers" (Preface to the English translation (1986)).

"Jacques Lacan (April 13, 1901 to September 9, 1981) was a major figure in Parisian intellectual life for much of the twentieth century. Sometimes referred to as "the French Freud," he is an important figure in the history of psychoanalysis. His teachings and writings explore the significance of Freud's discovery of the unconscious both within the theory and practice of analysis itself as well as in connection with a wide range of other disciplines. Particularly for those interested in the philosophical dimensions of Freudian thought, Lacan's oeuvre is invaluable. Over the course of the past fifty-plus years, Lacanian ideas have become central to the various receptions of things psychoanalytic in Continental philosophical circles especially." (SEP).

Angelo Louis Marie Hesnard (1886-1969) was an extremely important early French psychonanalyst and psychiatrist famous for his contributions to French sexology in the 30'ies and his groundbreaking early studies on Freud.
He was a founding member of the Société psychanalytique de Paris, founded in 1926, and he occupies a central role in the history of modern psychoanalysis, being the co-author of the first French work on psychoanalysis and the person who introduced Freudian psychoanalysis to France.

In the fifties he debated with Jacques Lacan over the meaning of Freud's saying "Where It was, shall I be"; but when debarred by the IPA from the roster of training analysts as a representative of the chauvinist wing of French psychoanalysis, he followed Lacan into the École Freudienne de Paris in 1964.

"HESNARD, ANGÉLO LOUIS MARIE (1886-1969)
A psychoanalyst, doctor with the French Navy, and professor at the École Principale du Service de Santé de la Marine... He was coauthor of the first French work on psychoanalysis and one of the founding members of the Société Psychanalytique de Paris (SPP). He was the son of Angélo Théodose Hesnard and Lélia Célénis Rosalie Blancon, from a family of judges. His brother Oswald, who had a degree in German, helped him understand Freud's writings.
After completing his studies in Pontivy, he entered the École de Santé de la Marine et des Colonies in Bordeaux on October 20, 1905. A student of Albert Pitres, then of Emmanuel Régis, he wrote his dissertation in 1909 on "Les troubles de la personnalité dans lesétats d'asthénie psychique," in which there is a reference to Freud. He continued his military career in Toulon, then, from 1910 to 1912, on the armored cruiser "Amiral Charner" in the Middle East.
Upon his return in 1912 he was appointed assistant at the Clinique des Maladies Mentales at the University of Bordeaux, where he rejoined Emmanuel Régis, who encouraged Hesnard to study Freud. On January 2, Freud wrote to Karl Abraham, "Today I received a letter from a student of Régis, in Bordeaux, written on his behalf, apologizing in the name of French psychiatry for its present neglect of Ya." According to a letter to Ernest Jones on January 14, the reference is to the "apologies from the French nation" that Freud received. This was followed in 1913 by the publication of "La doctrine de Freud et de sonécole" by Emmanuel Régis and Angélo Hesnard in "L'Encéphale".
" La Psychanalyse des névroses et des psychoses " appeared in 1914. It was a lengthy précis-and as faithful as it was possible to be at the time-of Freud's principal theories, as Sándor Ferenczi noted in the review of the book he wrote in 1915. This was followed by an examination of the criticisms the theories had received from various authors, and finally by several commentaries, of which Hesnard claimed, after Régis' death, that he-Régis-was the principal author.
They recognized that "Freud's system seems to constitute, regardless of what one may say, one of the most important scientific movements of the current psychological period." Nonetheless, their remarks essentially referred to what appeared to them to be no more than "ingenious assumptions" that were both original and well understood, since-and this is an argument that would be repeated for decades to come-"Freud's method of conception is based on that of Janet, whom he has constantly been inspired by. Transforming the term 'psychological analysis,' employed by Janet, into psychoanalysis has changed nothing in the method used by both students of Charcot." The causal importance given to sexuality or symbolism was also criticized. While Freud, in his "On the History of the Psychoanalytic Movement" (1914d), concluded that "Régis and Hesnard (Bordeaux) have recently [1914] attempted to disperse the prejudices of their countrymen against the new ideas by an exhaustive presentation, which, however, is not always understanding and takes special exception to symbolism," he reproached Hesnard for years for this type of finding. In France the work remained the only extensive essay on psychoanalysis for nearly twenty years and was reprinted in 1922 and 1929." (Encycl.).

Alain de Mijolla (1933-2019) was a psychoanalyst in the Societe psychanalytique de Paris in 1968, and by 2001 a training analyst there. He also created and chaired the International Association of History of the Psychoanalysis (AIHP) and received the Mary S. Sigourney Award in 2004 (stating about him: A renowned author and lecturer, editor and influential researcher of the history of psychoanalytic ideas, Dr. de Mijolla conceived and has directed and edited an authoritative Dictionnaire International de a Pysychanalyse in French and now in English. This dictionary, which has received widespread acclaim in Europe, is an extremely important undertaking for the whole psychoanalytic community. More than four hundred scholars have contributed to this dictionary, which is a landmark in its field. This dictionary of analytic concepts and terms includes commentaries on international psychoanalysis as well as brief biographies of the major pioneers of psychoanalysis. He has also contributed widely in the field of psychoanalytic history and is President of the International Association for the History of Psychoanalysis, which received a Sigourney Award in 2001.
He wrote numerous articles and important works in the history of phychoanalytic and edited psychoanalytical collections at several publishers, including the three volumes of the "International Dictionary of Psychoanalysis." He is famous for his studies of Freud that shed new light on the history of psychology and on Freud himself, and he drew Freud into contemporary times, famously stressing the difficulties of representing the psychoanalytic setting in cinematic terms.

The first edition of "De la Psychose Paranoïque" is of great scarcity, especially in wrappers and fully complete as here, with the half-title and the 7 unnumbered leaves with printed dedication to family, friends, and mentors. Furthermore, presentation-copies of this landmark work are of extreme scarcity, and the provenance of the present copy is very hard to beat.