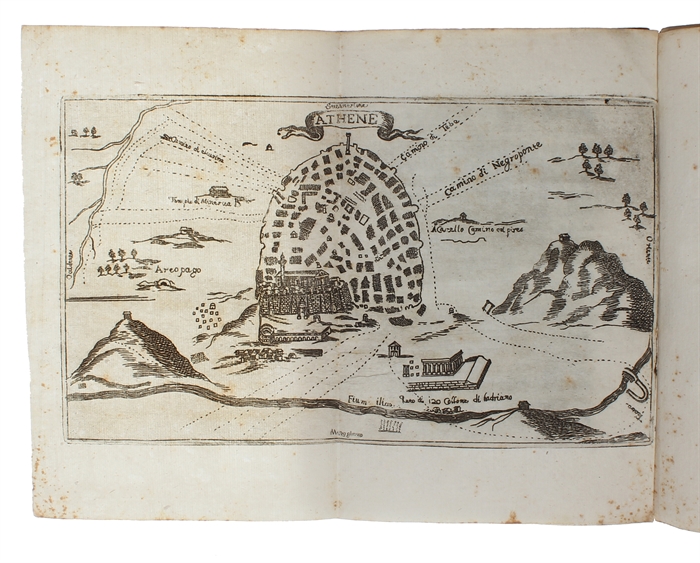 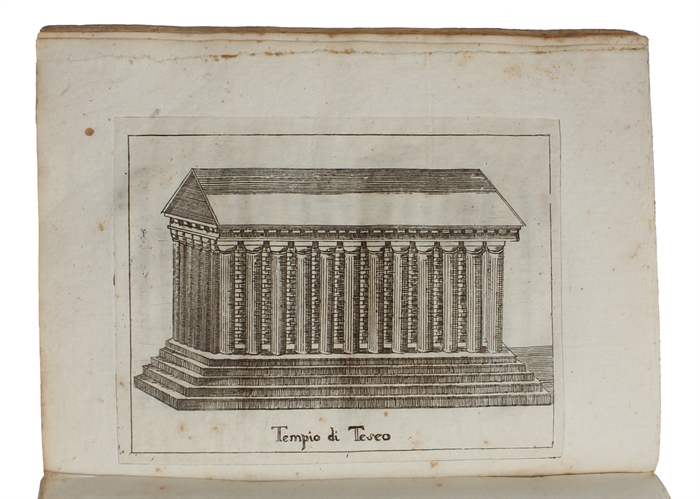 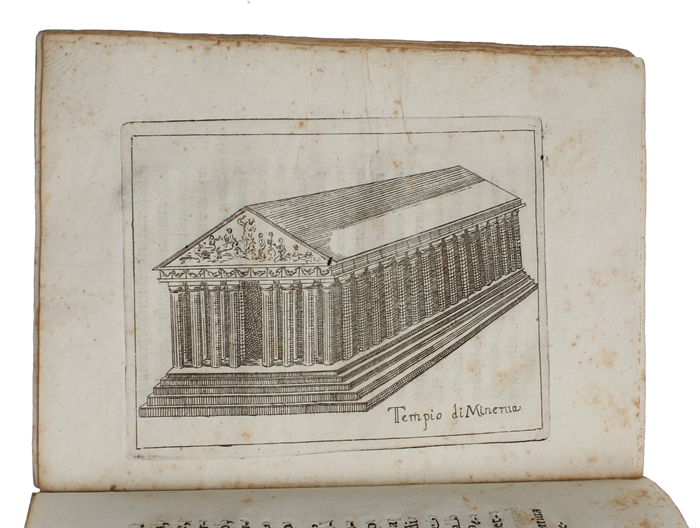 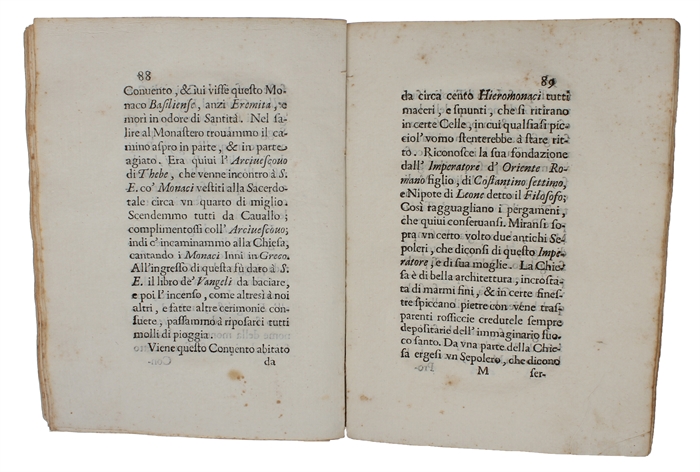 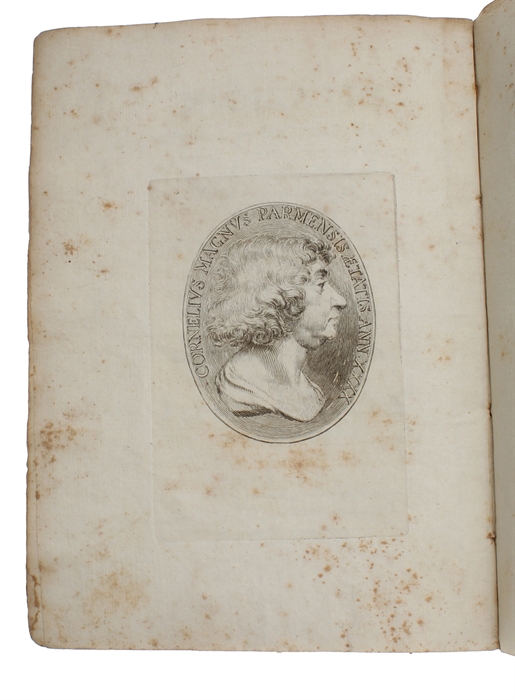 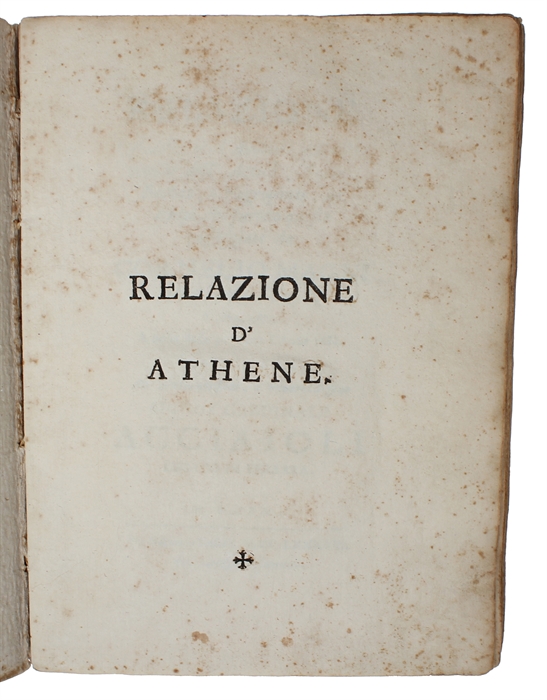 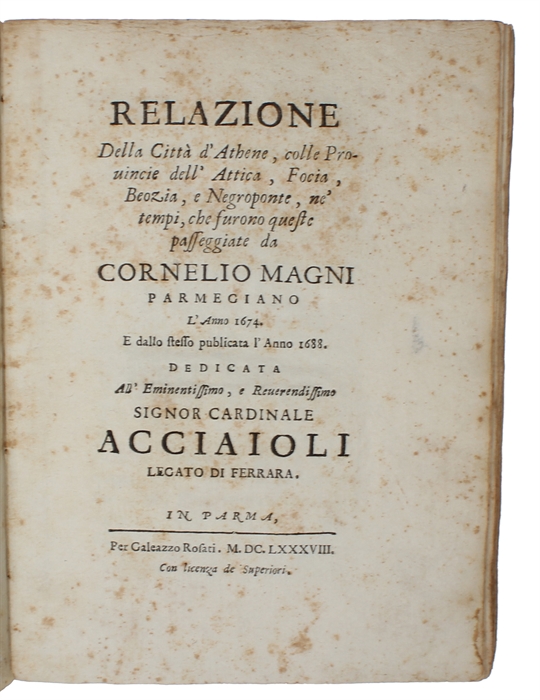 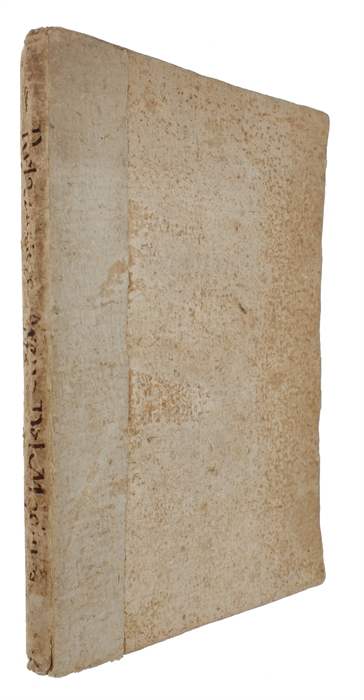 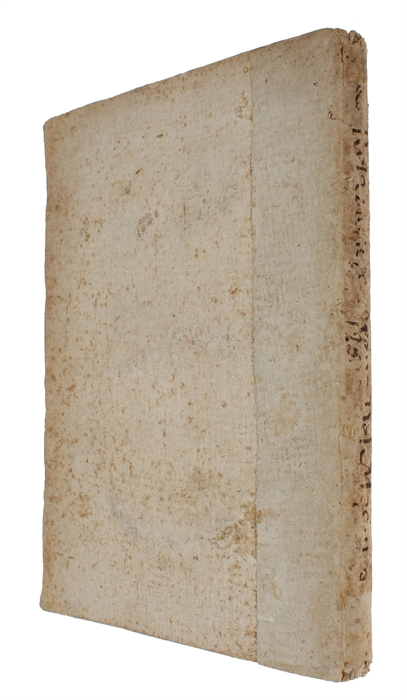 4to. In contemporary (original?) cardboardbinding with title in contemporary hand to spine. Occassional brownspotting, primarily to first and last leaves, throughout in margins. Hindges a bit wear, otherwise a nice and completely unsophisticated copy. (4) ff including half-title, 135 pp. + engraved frontiespiece and 6 plates of Athens of which one is folded. [folding city plan of Athens, the Temple of Theseon, The Lantern of Demosthenes, The Temple of the Winds, The Temple of Minerva (ie the Parthenon), a bust of Ceres].

Rare first edition of Magni’s important account of Athens, constituting one of the earliest descriptions from the modern era to present accurate eyewitness illustrations of Athen’s legendary monuments. Magni was part of the Embassy of Marquis de Nointel to the Ottoman court and the present publication is the first published, however unoffical, account of any part of this voyage.

Charles-Marie-François Olier, marquis de Nointel, was the French ambassador to the Ottoman court of Mehmed IV, from 1670 to 1679. By June 1673 he had achieved a reduction in customs charges, putting France on an equal terms with England and Holland and giving new life to French commerce in the Levant. The project of placing Christians and Christian institutions under French patronage was less successful, resulting in numerous actions at law.

In September 1673 he made a tour to enregister these new prerogatives; it took him to Chios, the Cyclades, Palestine and Egypt ending at Athenes and it lasted seventeen months.
Nointel brought painter and draughtsman who made over 500 drawings of towns, antiquities, ceremonies and examples of local fetes and customs in Asia Minor, Greece and Palestine. Nointel’s personal account of the Parthenon and Carrey’s drawings, however, remained unpublished until the mid-nineteenth century, which makes Magni’s present work the earliest published account the embassy of marquis de Nointel.

“After the fall of Constantinople in 1453 and the Turkish conquest of Greece a few years later, Athens, and the Acropolis in particular, became virtually inaccessible to foreigners. For inspiration and examples from the classical past, the architects of the Renaissance thus relied on Roman ruins, which, though regarded as mere imitations of the Greek originals, were readily visible throughout Europe […] The rich vocabulary of sixteenth- and seventeenth-century architecture was developed without reference to the actual architecture of Greece, over time, the glories of Rome were accepted by many as the real source of inspiration for contemporary architecture and extolled as such.” (Roy, The Ruins of the Most Beautiful Monuments of Greece).