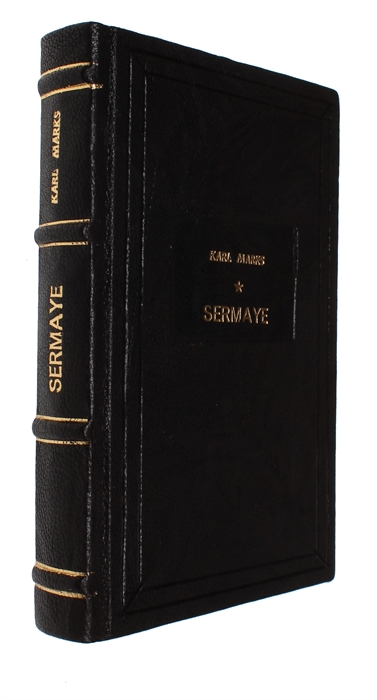 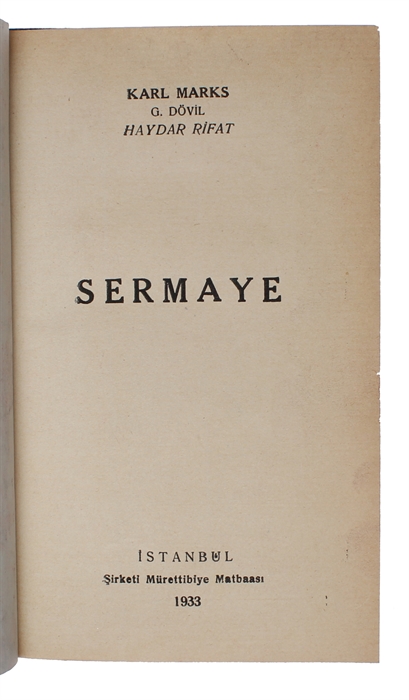 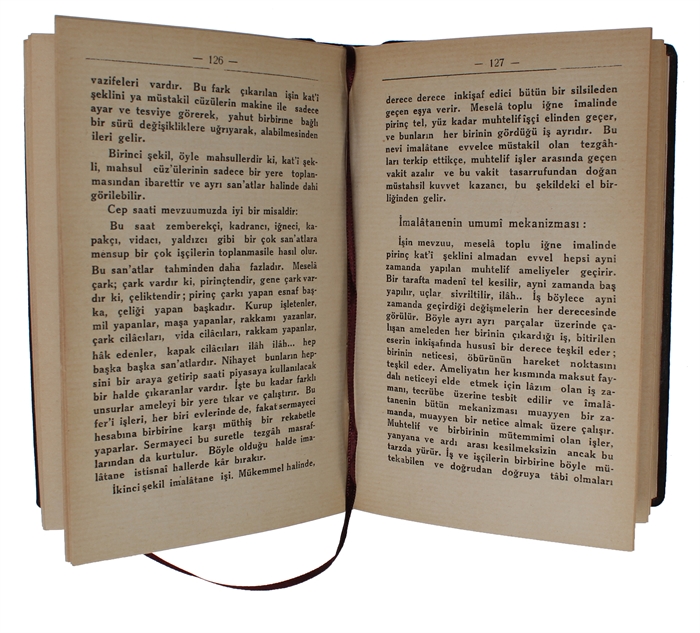 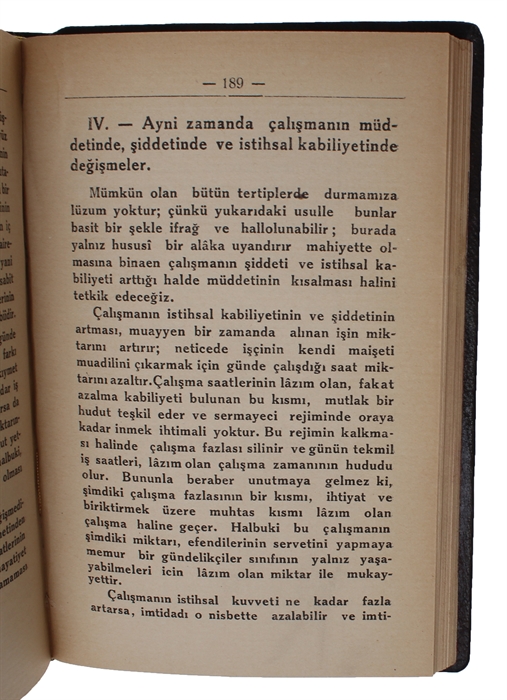 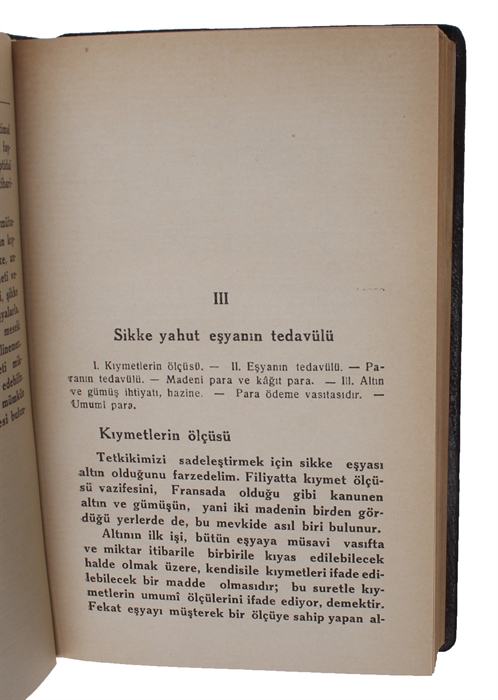 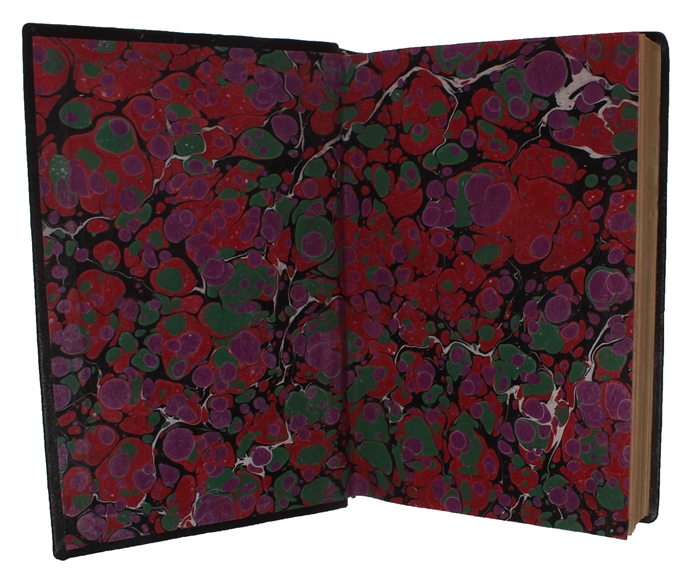 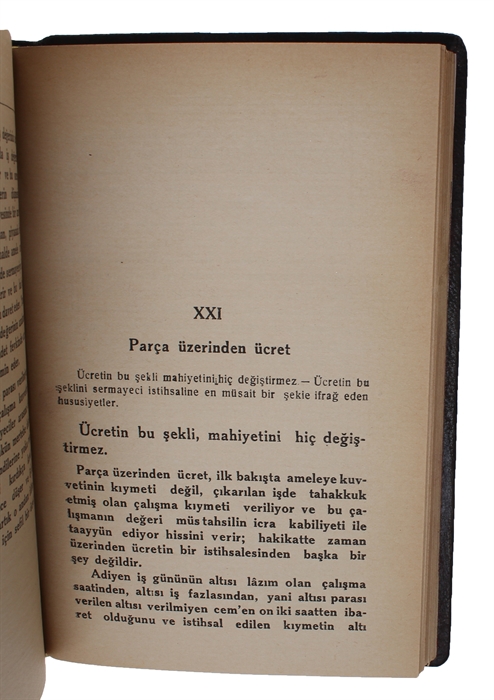 8vo. In a recent full black leather binding with four raised bands and gilt lettering to spine and front board. Blindtooled frames to front and back board. A fine and clean copy. (7), (1), (5)-305, (1), [errata-leaf] pp.

Rare first Turkish book-length appearance of Marx’s landmark ‘Das Kapital’, being a translation of the most important abridged version of Marx's Capital ever to have appeared,

Haydar Rifat’s (Yorulmaz) 1933 translation Sermaye, which was based on an abridged French version (1897) of the original by Gabriel Deville. Exerting great effort for the formation of the leftist thought and discourse in the late Ottoman and early Republican periods, Haydar Rifat was a prominent translator acting as a culture entrepreneur in the cultivation of leftist ideas. In his preface to Sermaye, Rifat notes that only passing remarks are made on Marx’s works in the faculties of law and political sciences and accounts for his attempt to further introduce Marx and his ideology to the academia and the public as follows:

Das Kapital, Karl Marx’s masterpiece, has been translated into all major languages, and numerous commentaries and interpretations on this work have been published by experts in modern countries. The translations, commentaries and interpretations of this work are so abundant that they quantitatively surpass the commentaries on all Holy Books; indeed, the works produced by various experts with different approaches under the title “Marxist Library” can fill up buildings. (Front the present work).

"The epitome, here translated, was published in Paris, in 1883, by Gabriel Deville, possibly the most brilliant writer among the French Marxians. It is the most successful attempt yet made to popularize Marx's scientific economics. It is by no means free from difficulties, for the subject is essentially a complex and difficult subject, but there are no difficulties that reasonable attention and patience will not enable the average reader to overcome.

“He also refers to how he has had to deal with the challenges arising from the translation of certain terms and/or the absence of any expert on the field whom he could consult:

While doing this short translation, I have encountered many difficulties. It is necessary to find equivalents for new terms, or rather the terms, which are new for us. The trouble arose not just from finding Turkish equivalents in line with the new course our language has taken, it also concerns the difficulty in finding any equivalent.

Some of these words and terms were used for the first time, while I have replaced some others with alternative words and terms though they have been in use for the past five or ten years. I almost never go out. On those rare occasions when I leave home and go out, I can find almost nobody whom I can consult and discuss my translation. (Rifat 1933, 7)”

Rifat concludes his lengthy preface with a humble, almost apologetic note stating that he would be more than willing to correct any mistakes in his translation that could potentially cause his readers difficulty and that he had consulted a whole list of experts, mainly economists, about the equivalents of certain terms and the general content of the translation. The preface actually ends with a list of the names of the experts to whom Rifat had sent a copy of his translation” (Konca, The Turkish Retranslations of Marx’s Das Kapital as a Site of Intellectual and Ideological Struggle)

Rifat’s translation immediately triggered a series of articles and critiques in various journals and papers upon its publication.