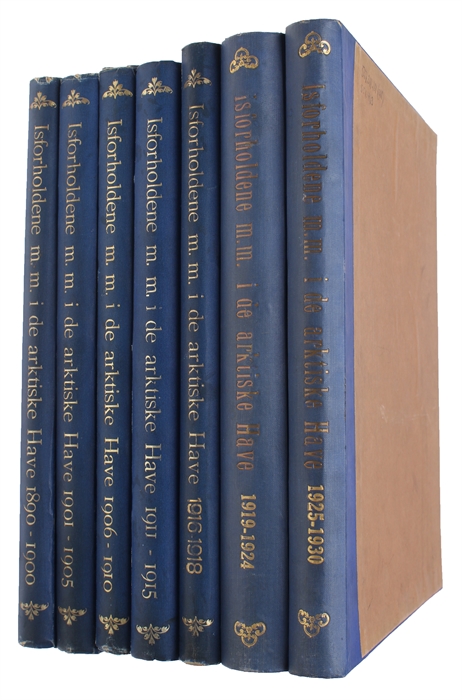 THE FIRST COOPERATIVE AND SYSTEMATIZED MONITORING OF THE ARCTIC SEA ICE

Small folio. The issues 1893-1915 are all bound with all the original printed wrappers (stating that they are off-prints) for every issue (except for the front wrapper for the first issue) in four near contemporary blue half cloth bindings with gilt titles and years to spine. The issues 1916-1930 are all present in the original printed wrappers and housed in three custom-made slipcases identical to the four preceding volumes. Ste back wrapper of the 1924-issue is loose. Otherwise the set is generally in excellent condition, with stamps from the Danish Meteorological Institute, in the holdings of which it has been until the present day. With numerous charts and maps throughout.

Scarce run of the important first Arctic Sea Ice Charts from the Danish Meteorological Institute, all in off-prints from the Meteorological Year Books of Danish Meteorological Institute, constituting a continuous run, from its very beginning in 1893, of the first 38 years. These earliest Arctic Sea ice measurements and charts are absolutely fundamental for the monitoring of sea ice and, for our ability to determine the extent of the acceleration of global warming, and for the possibility of potentially changing climate patterns.

"...the maps from the Danish Meteorological Institute. These are remarkable for their information value and because they represent a cooperative international effort to report ice conditions in a systematic way that was sustained over decades." (Florence Fetterer: Piecing together the Arctic's sea ice history back to 1850, in: Carbon Brief).

The early surveillance of the Arctic Sea Ice has been of immense importance to the development of climate change science. It is the cause of the determination of global warming and the primary proof we have of the deterioration of sea ice, the heating of the oceans and the rice of Arctic temperatures. These seminal charts constitute one of the very most important sources to our understanding of this world-threatening phenomenon.

"Over the last three centuries, geographers, oceanographers, geophysicists, glaciologists, climatologists, and geoengineers have shown great interest in Arctic Ocean sea ice extent. Many of these experts envisaged an ice-free Arctic Ocean. This article studies three stages of that narrative: the belief in an ice-free Arctic Ocean, the potential for one, and the threat of one. Eighteenth and nineteenth century interest in accessing navigable polar sea routes energised the belief in an iceless polar sea; an early twentieth century North Hemispheric warm spell combined with mid-century cold war geostrategy to open the potential for drastic sea ice loss; and, most recently, climate models have illuminated the threat of a seasonally ice-free future, igniting widespread concerns about the impact this might have on Earth's natural and physical systems. This long narrative of an ice-free Arctic Ocean can help to explain modern-day scepticism of human-induced environmental change in the far north." (An ice-free Arctic Ocean: history, science, and skepticism).