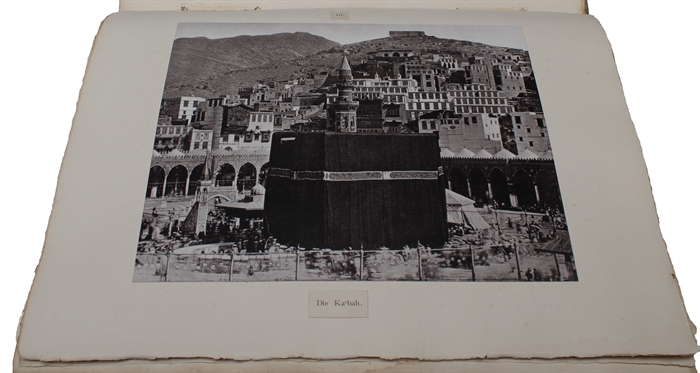 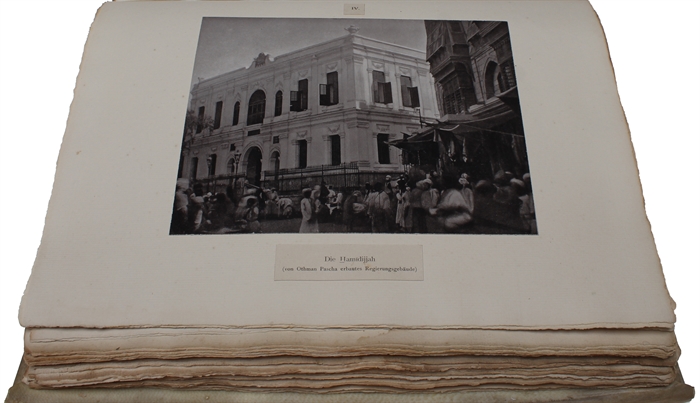 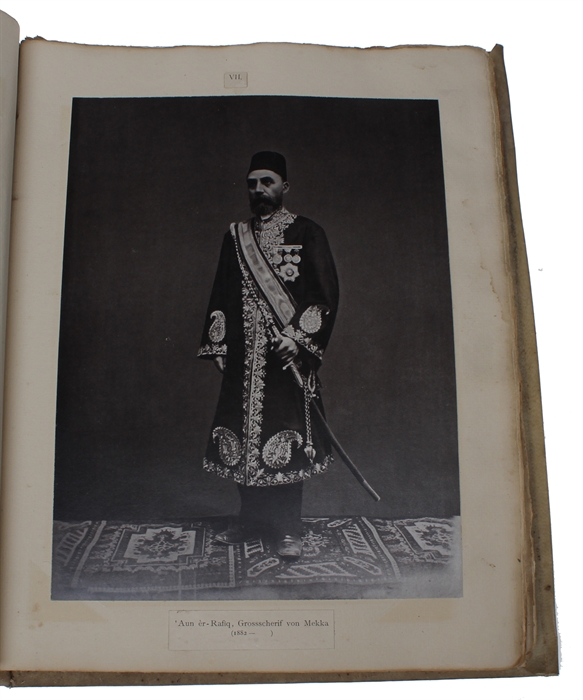 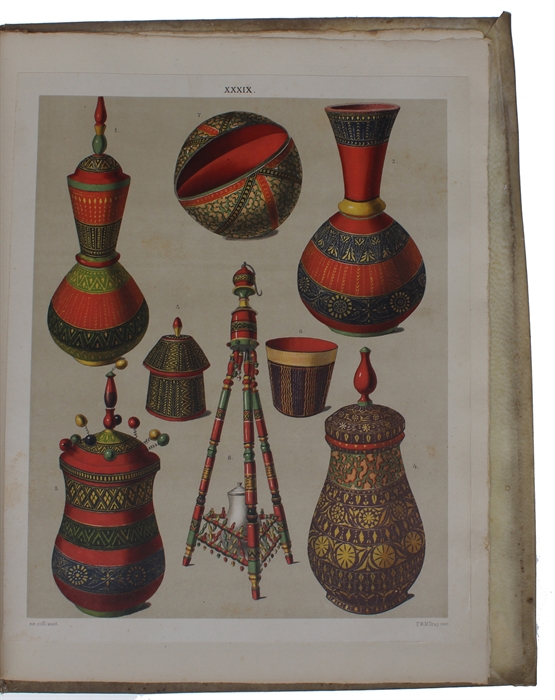 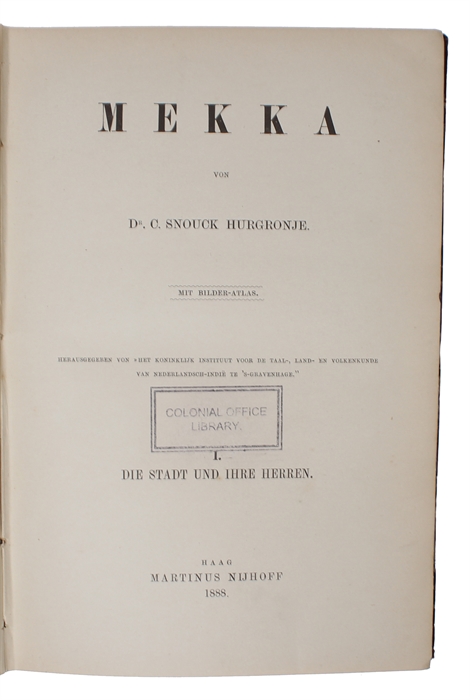 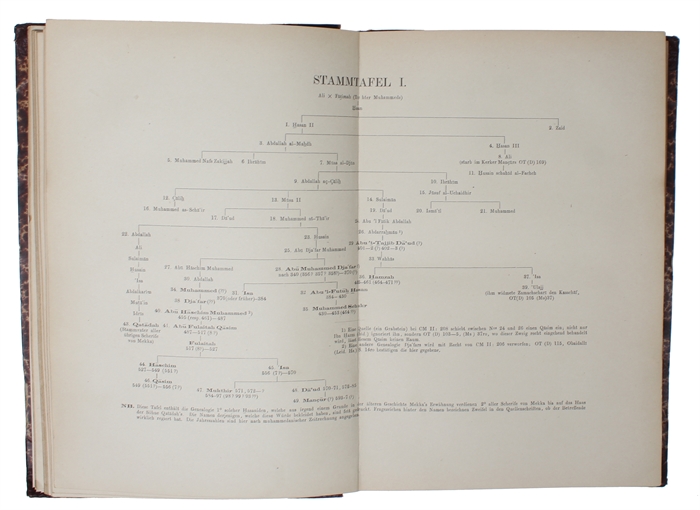 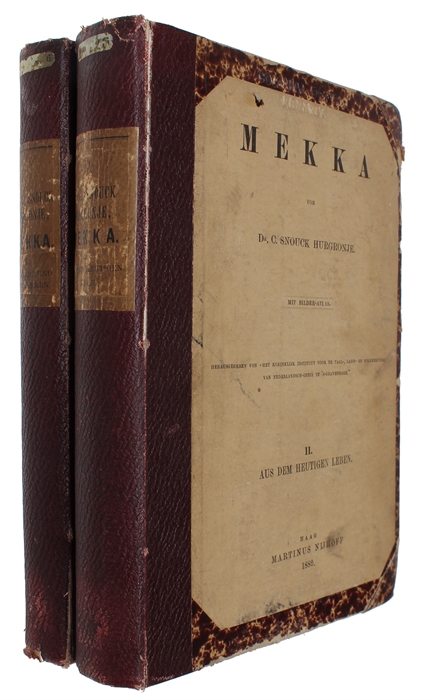 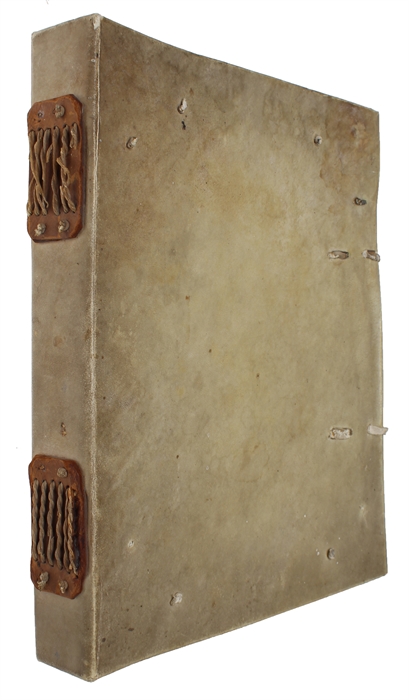 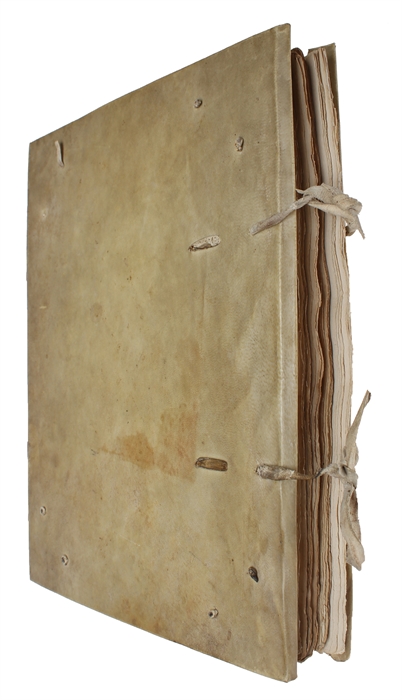 Text-volumes in lex-8vo, two volumes, identically bound in near contemporary burgundy half cloth with the original printed front wrappers preserved an pasted on to front boards. the original printed paper spine labels have also been preserved an pasted on to spines. Wear to capitals, corners, and hinges. Blindstamped library imprint to top of front boards (Colonial Office Library). Bound with both half-titles. The half-title of vol. 1 mounted, as is the title-page of vol. 2. Stamps to title-pages (Arab Boreau Cairo and Colonial office Library). Otherwise a clean and fine copy with no noteworthy flaws. XXIII, (1), 228, (2) pp. + 3 genealogical tables and 2 folded maps + XVIII, 397, (1) pp.

The atlas volume consists of the printed table of contents and all 65 photographs and lithographs inserted into a 19th century full vellum photograph album with sturdy leaves. The album itself has some wear, but is sturdy, robust and crarming. It artistically shows the craftmanship of the stiching by displaying parts of the sewing cords on leather onlays on the spine. Leather ties. In all, there are 75 illustrations, consisting in four chromolithographic plates, 6 tones lithographic plates (one double-page and folded) and 65 original photographs of varying sizes. Some are full-page, some are mounted four to a page, and some that have originally been four (and in one case three) to a page have here been individually mounted on a leaf each. Although taken out and mounted in to the present album, all numberings (I to XL) have been preserved, as have the titles of the pictures. Generally in very good condition, although one lithograph has a closed tear.

Scarce first edition of the standard scientific work on Mecca, the first of its kind ever to be published.

This magnificent work constitutes a pivotal historical source for our knowledge of the Holy City, for some the Forbidden City. It is arguably to date the most important Western account of Islam's holy city, not least due to the magnificent photographs taken by Snouck Hurgronje himself and his student Al-Sayyid Abd al-Ghaffar, a Meccan doctor, who became the first Arab photographer of Mecca. The work gives us the most unique insight into the people, the life and faith of Mecca at a most crucial time for both the city and the Arabian peninsula.

"The 21st century reader should realize that the present book is a classic, but in many ways also a modern book. It describes Meccan society in the 1880's, and as such it is an important historical source - in fact till today the only one on the subject." (Intruduction by J.J. Witkam to the English translation, p. (XIII) ).

"Christiaan Snouck Hurgronje, (born Feb. 8, 1857, Oosterhout, Neth.-died June 26, 1936, Leiden), professor and Dutch colonial official, a pioneer in the scientific study of Islam.
While serving as a lecturer at the University of Leiden (1880-89), Snouck Hurgronje visited Arabia (1884-85), stopping at Mecca. His classic work "Mekka", 2 vol. (1888-89), reconstructs the history of the holy city and sheds light on the origins of Islam, early traditions and practices, and the first Islamic communities. The second volume, translated into English as "Mekka in the Latter Part of the 19th Century" (1931), contains many details of daily life in Islamic culture and deals with the Indonesian Muslim colony at Mecca." (Encycl. Britt.).

"Our standard scientific work on Mecca and the pilgrimage we owe to the next Christian pilgrim on our roll, Prof. C. Snouck Hurgronje... [H]e journeyed to Mecca, where for six months he lived as a student of the Koran, and gathered the material for his monumental work on that city. As Burckhardt had been mainly interested in the topography of the city, and the pilgrimage ceremony, Snouck Hurgronje interested himself particularly in a social study of the Meccan community, and so complete is his work that he has left nothing to later writers save to note the changes made by passing years." (Arthus Jeffery, The Moslem World, Volume 19 (1929), pp. 232-3).

Much speculation has been given to the circumstances under which Snouck Hurgronje succeeded in being able to enter Mecca the way he did. No other Western scholar had been given the opportunity of entering the Holy City this way.
"Ever since Snouck Hurgronje published his monograph on Mecca, the book has amazed its readers. Mecca was and is the Holy City for some, the Forbidden City for others. How had a young Western scholar succeeded, and in such a short time, to become accepted by the Meccans as one of them and to write such a detailed description of Mecca's society? Since Snouck Hurgronje has mostly kept silent about this remarkable feat, stories of legendary proportions were bound to come into circulation..." (Witkam, p. (XIII) ).
Through mediation with the Ottoman governor in Jeddah, Snouck Hurgronje, who was fluent in Arabic, was examined by a delegation of scholars from Mecca in 1884 and, upon successful completion of the examination, was allowed to commence a pilgrimage to the Holy Muslim city of Mecca in 1885. His chief object was to become intimately acquainted with the daily life of the Mekkans and of the thousands of Muhammadans from all parts of the world living in Mekka for material or spiritual purposes.
A pioneering traveler, he was a rare Western presence in Mecca. He embraced the culture and religion of his hosts with passion, to such an extent that he successfully gave people the impression that he had converted to Islam.

But what is just as astonishing as his entering so fully into life in Mecca and being able to report so intimately and lively on it, is his accompanying photographic documentation. Also in this respect, he is a pioneer.

In his day, a camera probably weighed ab. 40 kilos, and one needed a number of chemicals in order to develop the pictures, which would have been done on site. Having been forced to leave Mecca due to a misunderstanding, after five months, Hurgronje gave the photographic equipment to a local physician he had been staying with, Al-Sayyid Abd al-Ghaffar, who began using the camera and sent images back to Hurgronje in the Netherlands. Thus, Abd al-Ghaffar became Mecca's first home-grown photographer. Many of the photographs were originally credited solely to Hurgronje, but they are now jointly credited, with experts unable to tell who shot what.