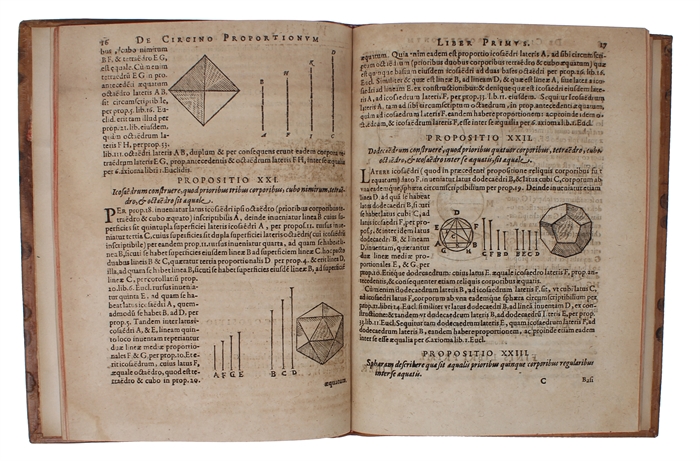 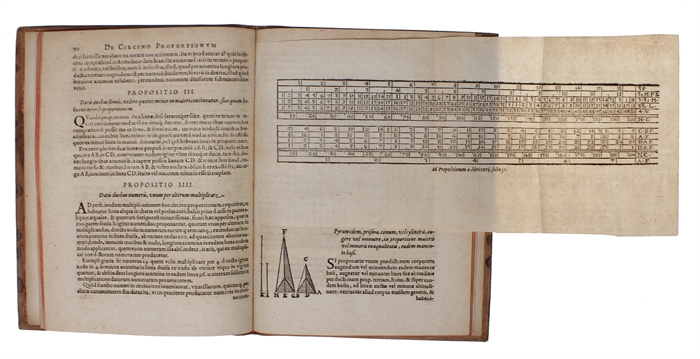 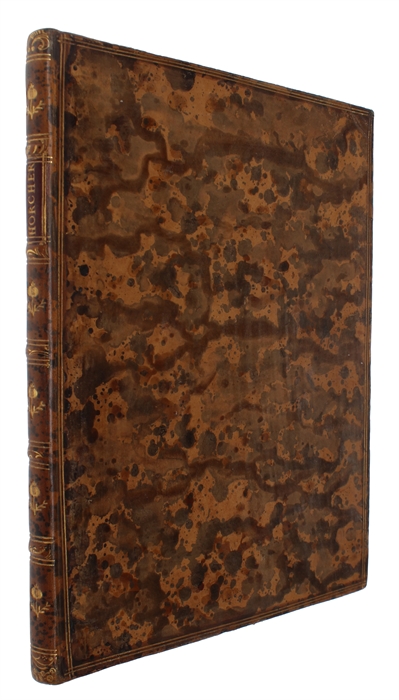 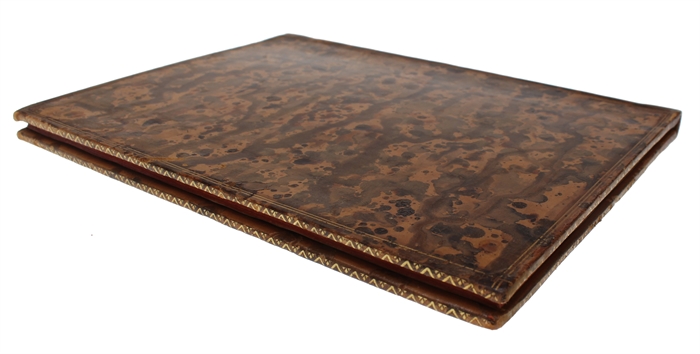 THE INVENTION OF THE PROPORTIONAL COMPASS

4to. Bound in a beautiful 18th century full mottled calf binding with double gilt line-borders to boards. Edges of boards gilt. Expertly rebacked perfectly matching the boards and the gilding. With gilt leather title-label and gilt ornamentations. End-papers renewed. B2 and B3 defective in lower blank margins, not affecting text. A nice and clean copy. 53, (1) pp. + 1 folded plate and numerous illustrations in text.

The proportional compass was a seminal calculating instrument in use from the end of the sixteenth century until the nineteenth century. Consisting of two rulers of equal length joined by a hinge, it was a precursor to the sector and could be used for solving problems in proportion, multiplication and division, geometry, and trigonometry, and for computing various mathematical functions, such as square roots and cube roots. The sector derives its name from the fourth proposition of the sixth book of Euclid, where it is demonstrated that similar triangles have their like sides proportional. Some sectors also incorporated a quadrant, and sometimes a clamp at the end of one leg which allowed the device to be used as a gunner's quadrant.

“The device was apparently first developed by Joost Bürgi and first published by Levinus Hulsius (1604). Hulsius offered the instrument for sale and thus limited himself to instructions for its use and did not detail its construction. The present work provides construction details on the hindge and the creation of the scales.” (Tomash & Williams).

The sector was invented, essentially simultaneously and independently, by a number of different people prior to the start of the 17th century. Credit for the invention is often given to either Thomas Hood (who did not claim priority himself), a British mathematician, or to the Italian mathematician and astronomer Galileo Galilei. Galileo, with the help of his personal instrument maker Marc'Antonio Mazzoleni, created more than 100 copies of his proportional compass design and trained students in its use between 1595 and 1598. Of the credited inventors, Galileo is certainly the most famous, and earlier studies usually attributed its invention to him. James Kynvyn, Robert Beckit and Charles Whitwell all at some point also seem to have claimed to priority of the invention.

Giordano Bruno, shortly before his death, also saw its potential. It could measure the infinitesimal fractions of the angular degrees and calculate the proportions between lines, geometric shapes and solids, working on the proportionality and commensurability of angles and segments. This new precision in calculations confirmed Bruno’s thesis of  the existence of the physical minimumas opposed to the Aristotelian thesis of the infinite divisibility. (see: Zaffino, Giordano Bruno and the Proportional Eight Spike Compass)

The many claims of invention, however, do not deprive Horcher of being the very first to describe the actual construction of the instrument, thus being of seminal importance in its widespread use over more than three hundred years.