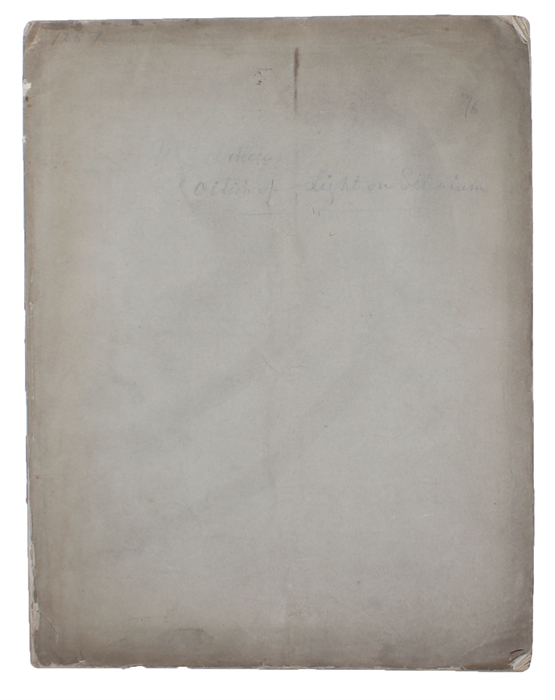 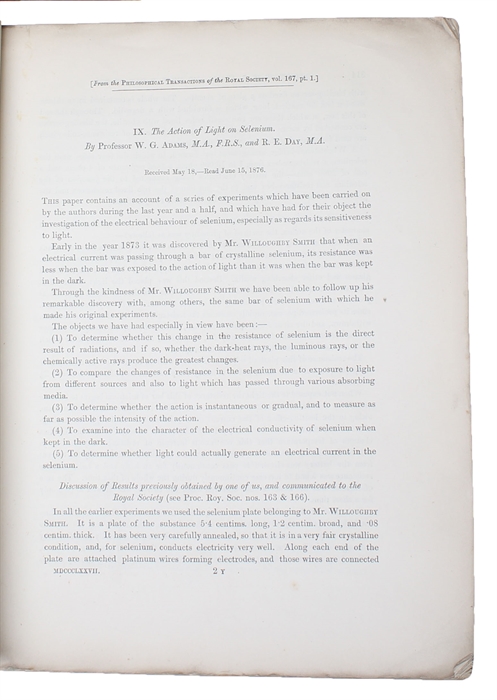 4to. In the original wrappers. Offprint from "Philosophical Transactions" 1877 - Vol. 167. Author and title written in light pencil to front wrapper. Wrappers with a bit of soiling and part of spine is missing. Corners bended. Internally fine and clean. Pp. 313-349.

First edition, in the extremely rare offprint, of Adams and Day's landmark paper, in which they demonstrated that electricity could be produced from light without moving parts, eventually leading to the modern solar cell. It is here that Adams shows for the first time that the discovery of Willoughby Smith - that the conductivity of selenium is due only to the effect of light - is correct and furthermore that light has an effect on the resistance of selenium and that light generates electrical currents in selenium.
Two years later Adams expanded the work and published 'Solar Heat'. Here he described his "Power Tower Concept", which to this day remains the basis of solar plants.

William Grylls Adams (1836 - 1915), professor of Natural Philosophy at King's College, London, and brother of the famous astronomer John Couch Adams (1819-1892), was President of the Physical Society of London from 1878 to 1880. In 1872 he was elected a Fellow of the Royal Society and in 1875 delivered their Bakerian Lecture. He was president of the Institute of Electrical Engineers and of the mathematical and physical section of the British Association.
His greatest achievement lies in demonstrating the seminal discovery that electricity could be produced from light without moving parts. The road to this discovery was begun in 1839 when Becquerel discovered that illumination of one of two metal plates in a dilute acid changed the electromotive force. Another French scientist, Auguste Mouchout, followed up on Becquerel's discovery, but it was not until 1876, when Adams and Richard Evans Day discovered that illuminating a junction between selenium and platinum has a photovoltaic effect, that the foundation for the documented use of solar thermal power was laid [with the publication of the present paper].

"From a historical viewpoint, it is of interest to note that the first experiments on the generation of solar thermal power in India were conducted by an Englishman, William Adams, about one hundred years ago. Adams stayed in Coloba, Mumbai and performed his experiments in the compound of his bungalow. He used a sphecical reflector 12 m in diameter, made from sheets of glass mirror. The sun's rays were focussed on a boiler having a capacity of about 60 litres and the steam generated was used to drive a 2.5 HP steam pump. Adams's work is described in a book written by him entitled "Solar Heat - A Substitute for Fuel in Tropical Countries for Heating Steam Boilers and Other Purposes" (Education Society's Press, Byculla, Bombay, 1878)." (Sukhatme & Neyak, "Solar Energy. Principles of Thermal Collection and Storage", p. 48)

"William Grylls Adams was and English scientist who taught as a professor in the department of Natural Philosophy at King's College. He is notable for his contribution to the discovery of the photoelectric effect, on which all solar energy applications are based. He was inspired by Auguste Mouchout's invention of the solar steam engine. With the intent of making improvements to Mouchot's design, Adams began to experiment with different materials and designs. In 1876, working in conjunction with his student, Richard Day, he discovered that selenium produced electricity when exposed to sunlight. Using the selenium, he then added mirrors to the design to concentrate sunlight on the engine. This design came to be known as the power tower concept and is still in use today." (Smith & Taylor, "Renewable and Alternative Energy resources: A Reference Handbook", 2008, pp. 1556-56).