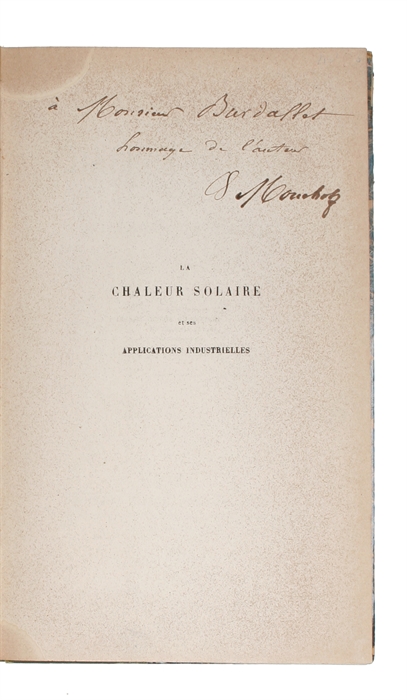 8vo. Contemporary green half cloth with gilt red leather title-label to spine. A bit of wear to extremities and title-label with wear. A bit of brownspotting to first and last leaves. VII, (1), 238 pp. Illustrated.

Scarce first edition, presentation-copy, of the first book explicitly devoted to solar energy, "Solar Energy and its Industrial Applications", which coincided with the unveiling of Mouchot's largest solar steam engine, the so-called "Sun Engine", in 1869, which caused a revolution in the development of solar thermal power. His 1869 work constitutes a milestone of what we now call "green energy", as it laid the foundation for our understanding of the conversion of solar radiation into mechanical power driven by steam.

The PRESENTATION-INSCRIPTION, to the half-title reads: "|a Monsieur Burdallot/ hommage de l'auteur/ A. Mouchot".

Auguste Mouchot was a French mathematics teacher, who in the 1860'ies became famous as the designer (and patent-taker) of the first machine that generated electricity with solar thermal energy electricity by the exposure of the sun. Mouchot began his work with solar energy in 1860 after expressing grave concerns about his country's dependence on coal. His work on solar energy and on the development of his sun machine forms the basis for the later developments on solar energy. "The work of Adams, Ericsson, and Shuman had been directly influenced by the solar conceptions of Augustin Mouchot, a man who arrived on the scene in nineteenth century France at precisely that moment when his ideas were likely to attract the most attention. It was a time when French industrial might was at a peak and her leaders open to new ideas, none more so than her emperor. In 1867, to commemorate the explosion of technology that had accompanied the industrial and artistic carnival over which he had presided for 15 years, France's Napoleon III decided to invite the whole world to an international exposition that he would host in Paris." (Kryza, The Power of Light, p. 147).

"His initial experiments involved a glass-enclosed, water-filled iron cauldron, in which sunlight passed through a glass cover, heating the water. This simple arrangement boiled water, but it also produced small quantities of steam. Mouchot added a reflector to concentrate additional radiation onto the cauldron, thus increasing the steam output. He succeeded in using his apparatus to operate a small, conventional steam engine. Impressed by Mouchot's device, Emperor Napoleon III offered financial assistance, which Mouchot used to produce refinements to the energy system. Mouchot's work help lay the foundation for our current understanding of the conversion of solar radiation into mechanical power driven by steam.
The publication of his book on solar energy, "La Chaleur solaire et ses Applications industrielles" (1869), coincided with the unveiling of the largest solar steam engine he had yet built. This engine was displayed in Paris until the city fell under siege during the Franco-Prussian War in 1871, and was not found after the siege ended." (The Energy Library).