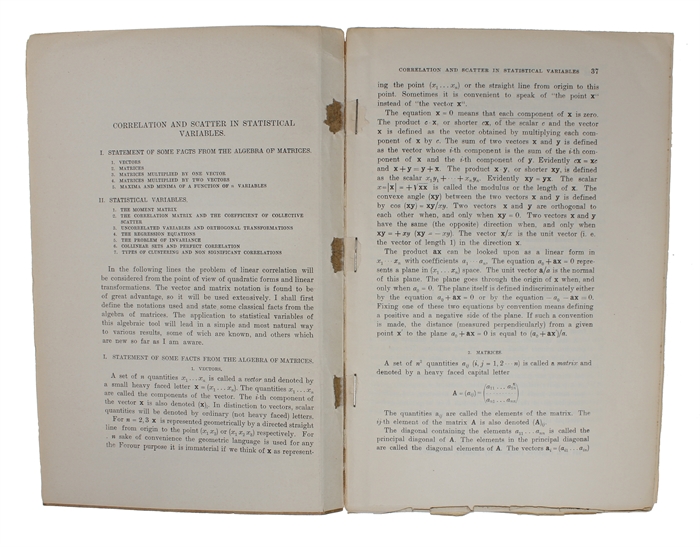 Correlation and Scatter in Statistical Variables.

8vo. In the original printed wrappers. In "Nordisk Statistisk Tidsskrift", Band 8. With author's presentation stamp: "Hommage de l'auteur" to front wrappers. Owner's signature of statistician Anders Hald (the author of "A History of Mathematical Statistics") to front wrapper. Wrappers with wear and part of upper and lower part of spine missing. Internally fine and clean. Pp. 36-102.

Frisch was one of the founders of economics in general as a modern science. He coined a number of new words including econometrics and macroeconomics. He helped set up Neo-Walrasian research. He formalized production theory. In econometrics he worked on time series and linear regression analysis. With Frederick Waugh, he introduced the celebrated Frisch-Waugh theorem (Econometrica1933) (sometimes referred to as the Frisch-Waugh-Lovell theorem). His 1933 work on impulse-propagation business cycles became one of the principles of modern New Classical business cycle theory. He also helped introduce econometric modeling to government economic planning and accounting. He was one of the founders of the Econometric Society and editor of Econometrica for over twenty years. The Frisch Medal, so named in his honor, is given every two years for the best paper published in the Econometrica in the previous five years. (The New Palgrave).