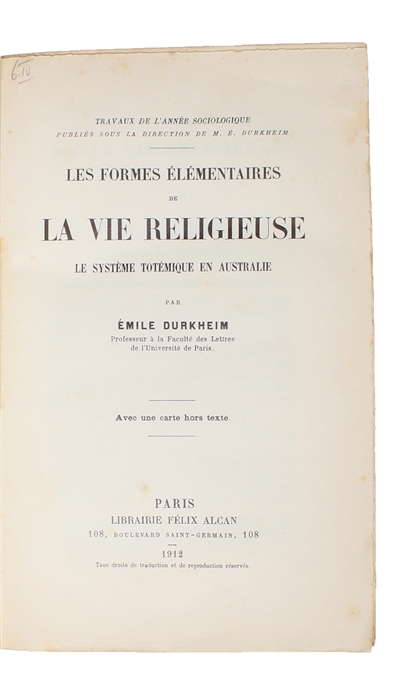 THE SOCIAL ORIGIN OF RELIGION

Scarce first edition - especially in this condition - of what is generally regarded as Durkheim's magnum opus, his groundbreaking study of totemism among the Australian aborigines, which led him to the foundational conclusion that religion is social, that the primary purpose of religion is to bind people together. Showing that society is the soul of religion, that society is the foundation of all religious belief, and that religion is what allows for a society to express its social unity "The Elementary forms of religious Life" furthermore explains the enduring relevance of religion throughout history.

In this milestone work of sociology, Durkheim sets out to discover the enduring source of human social identity. To that aim, he investigates totemism among the Australian Aborigines, acknowledging that all religion has its origin in totemism. Totems are collective symbols that represent both a god and society. The collective thought, of which totemism is an early expression, is the basis of all religious thought and as such also of philosophy and modern science.

The work came to have a profound effect on not only sociology and religion, but also on philosophy, psychology, and history of science, documenting how collective thought, through totemism and religious expression, enabled mankind to enter into a world of concepts and correspondence and to identity causes and relations. All philosophy and science ultimately rests on this collective thought, which allowed mankind to enter into a conceptual realm.

"The Elementary Forms has been applauded and debated by sociologists, anthropologists, ethnographers, philosophers, and theologians, and continues to speak to new generations about the intriguing origin and nature of religion and society." (from the English langiuage translation).

"The general conclusion of the book which the reader has before him is that religion is something eminently social. Religious representations are collective representations which express collective realities; the rites are a manner of acting which take rise in the midst of assembled groups and which are destined to excite, maintain, or recreate certain mental states in these groups. So if the categories are of religious origin, they ought to participate in this nature common to all religious facts; they should be social affairs and the product of collective thought. At least -- for in the actual condition of our knowledge of these matters, one should be careful to avoid all radical and exclusive statements -- it is allowable to suppose that they are rich in social elements." (From "The Elementary forms of religious Life").