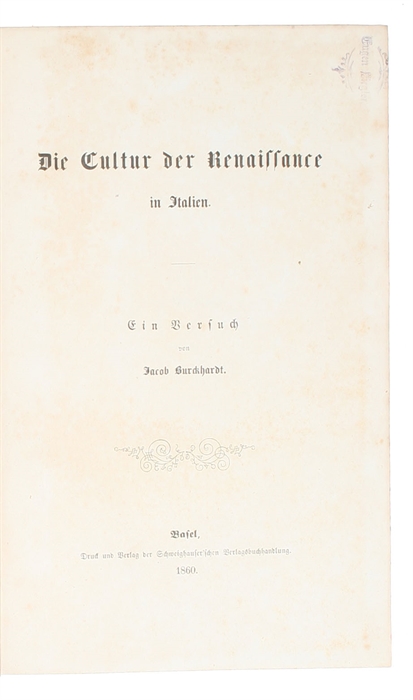 FOUNDING THE HISTORICAL STUDY OF THE RENAISSANCE - PMM 347

Basel, 1860. 8vo. A little later green half cloth with a recent printed paper title-label to spine. Brownspotting to some leaves. Some underlinings and maginal annotations, all in pencil. Near contemporary annotations/description pasted on to verso of dedication-leaf. (4), 576 pp.

The scarce first edition of Burckhardt's main work, the groundbreaking work on the culture of the Renaissance, which helped found the historical study of this previously much overlooked era.

" "The most penetrating and subtle treatise on the history of civilization", in Lord Acton's words, "a mere essay", as Burckhardt himself called it, "The Civilization of the Renaissance in Ittaly" has, for more than a century, determined the general conception of thirteenth- to fifteenth-century Italy." (PMM p. 210)

This classic of Renaissance historiography is of the greatest importance to the development of the history of the Renaissance and of history of art and culture in general. More specifically, Burckhardt here establishes the fact that the Renaissance came first in developing the human individuality to the highest degree. He places the earliest signs of "the modern European Spirit" in Florence, which was a great contributing factor to the comprehension of this city as representing one of the highlights of European culture.

The Swiss historian of art and culture, Jacob Chrisoph Burckhardt (1818-1897), contributed seminally to the historiography of these two fields. He is considered the discoverer of the Renaissance, and with his main work he founded the study of thirteenth- to fifteenth-century Italy and thereby the historical study of the Renaissance, the society of which he dealt with all aspects of.
In general, Burckhardt's works all constitute an original historical approach to the study of art, culture, social institutions etc.
As a highly respected scholar of Greek civilization, Burckhardt, with his original historiographical approach, was highly admired by Nietzsche, who also attended his lectures. The two kept in contact and corresponded frequently. Like Nietzsche, Burckhardt was a great admirer of Schopenhauer, and he greatly opposed the Hegelian interpretations of history.

"... as in the case of other great historians such as Gibbon, Ranke, Macaulay, no criticism of details can detract from the powerful spell which Burckhardt's book has exercised upon such widely different writers as Ruskin, Nietzsche and Gobineau, as well as upon innumerable lovers of the most magnificent period of European history." (PMM).