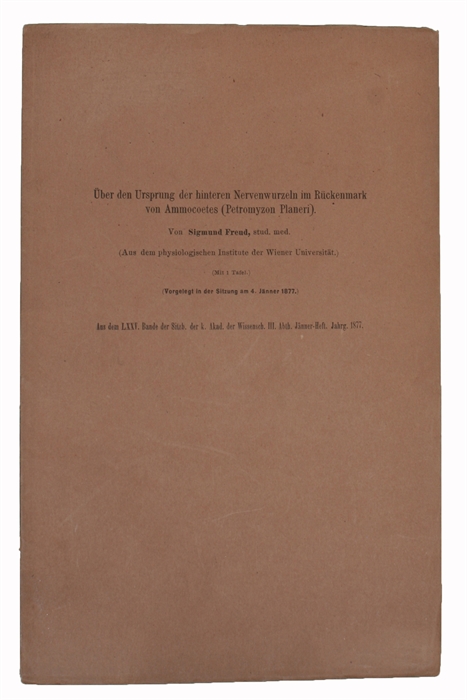 First edition, in the scarce offprint, of Freud's first publication, which documents the early beginnings of the scientific thought that came to found psychoanalysis.

In 1873 Freud entered the University of Vienna to study medicine. He chose to study medicine, not because he wanted to be a practitioner, but because he wanted to study the human condition with scientific rigor. In his early career, he modeled himself on Ernst von Brücke. "He spent an increasing amount of time in Brücke's Physiological Institute from 1876 through 1882. His first studies were on the connection of a large nerve cell (Reissner's cell) that had been discovered in the spinal cord of a primitive genus of fish, and his observations made it possible to fit these cells into an evolutionary scheme." (D.S.B. V:172).

In the background of this task - of studying this nerve cell of a primitive fish - lay a greater question; a question that arguably became formative for the greatest revolutionizer of the human mind, namely the question about the nervous system of higher animals - including human beings - differing in kind from the lower ones. "Freud's precise observation revealed that the presence of Reissner cells in the primitive spinal cord was because of the incomplete development of the embryonic neural tube to the periphery, and that this demonstrated an evolutionary continuity between the two. Having successfully solved this problem, he then continued his histological research on nerve cells, but also decided independently to work on crayfish... [h]e was beginning to show himself to be a creative scientist, heuristically positing a conception on the basis of empirical evidence, something that would reappear in his psychoanalytic method..." (Thomas Dalzell, "Freud's Schreber Between Psychiatry and Psychoanalysis...", p. 156).

"Years later Freud found this evolutionary-anatomical parallel to his phychoanalytic findings of important didactic use in his "Introductory Lectures on Psycho-Analysis." (Sulloway, "Freud, Biologist of the mind: Beyond the Psychoanalytic Legend", p. 268).

"To this vast and exciting field of research [the composition of nerve cells and the question whether the nervous system of higher animals is made up of elements different from those of lower animals] belonged the very modest problem which Brücke put before Freud. In the spinal cord of the Amoecetes (Petromyzon), a genus of fish belonging to the primitive Cyclostomatae, Reissner had discovered a particular kind of cell. ... Brücke wished the histology of these cells clarified. After a few weeks Freud came to him with the quite unexpected discovery that non-myelinated fibres of the posterior (sensory) nerves originated in some of Reissner's cells. Other fibres, probably also sensory, coming from these cells passed behind the central canal to the opposite side of the spinal cord ... Brücke pressed for publication [and] presented the study at the Academy of Sciences meeting of january 4, 1877. It appeared in the January Bulletin of the Academy. It was the first paper of Freud's to be actually published, since the one on his first piece of research, on the eel, did not appear until 3 months later." (Jones, Life and Work, vol. I, pp. 51 - 53).