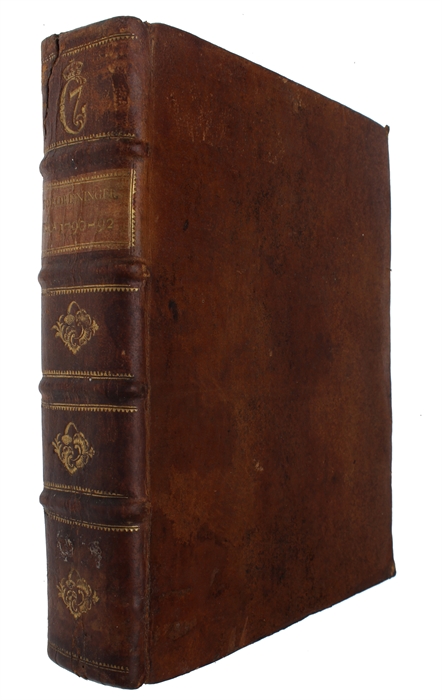 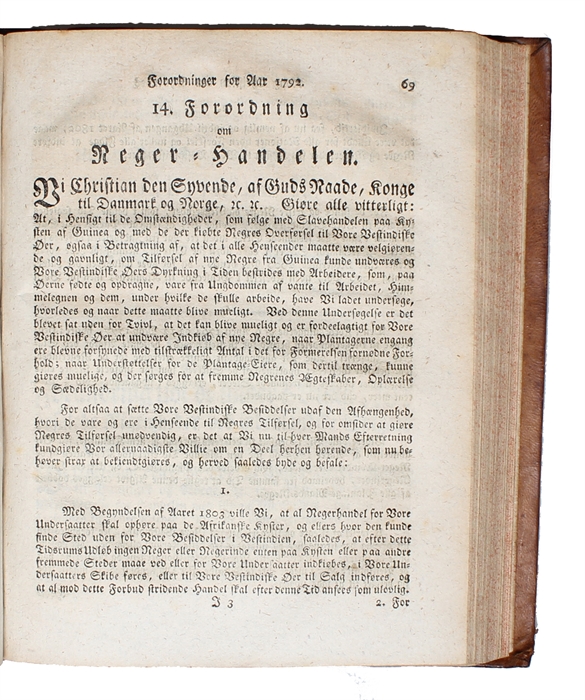 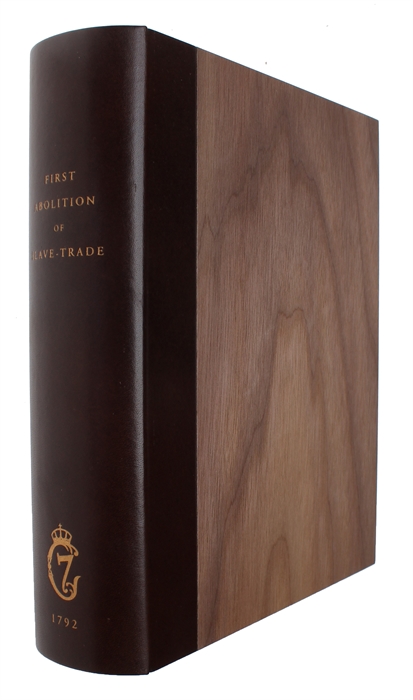 THE FIRST DECREE IN THE WORLD TO FORBID SLAVE-TRADE

4to. The entire volume of "Forordninger...", 1792 bound with the entire volumes of 1790 and 1791 as well in a very nice strictly contemporary brown full calf binding with four raised bands, gilt title-label and lovely gilt ornamentatiions to spine as well as the gilt, crowned monogram of King Chritian the VII to top of spine. Light wear and a closed tear to top capital. Otherwise in splendid condition, in- as well as ex-ternally. Stamp from the Danish Royal Military Library to front free end-paper. Pp. 69-71. [Entire volume: 146, 12 pp., 1 f. blank + 288, (8) pp., two folded tables + 323, (13) pp. woodcut vignettes of the Danish Elephant-order to title-pages].

Extremely rare first printing of the very first law anywhere in the world to abandon slave trade. From the library of King Christian VII, who passed the law, with his crowned gilt monogram to spine.

With the completely groundbreaking "Forordning on Neger=Handelen" ("Decree about the Negro-Trade") of 1792, under King Christian VII, Denmark became the first country in the world to forbid slave-trade. Although the first law against slavery as such, not just slave-trade, would follow half a decade later, this first decree forbidding trading in slaves was a major milestone towards equality and freedom for all of mankind, in fact the very first of its kind in the entire world. Britain would be the next country to follow lead, and their first law against slave-trading was passed in 1807, 15 years after the Danish. After the British followed The US, Spain in 1811, Sweden in 1813, Netherlands in 1814, and France in 1817.

From the 1660'ies until the end of the 18th century, about 111.000 slaves were sent from the Gold Coast in Danish Guinea to the Danish colony on the West-Indian islands St. Thomas, St. Jan, and St. Croix, this slave trade being part of a larger three-way trade between The Gold Coast, The West-Indian Islands, and Denmark. Weapons and alcohol were shipped from Denmark to Africa to buy slaves, and the slaves were transported to The West-Indies, from where other goods, especially sugar, were shipped back to Denmark.

During the last decades of the 18th century, many Europeans were having concerns with the continuation of trading with slaves. One of these was the Danish Minister of Finance, himself a plantation owner, Ernst Schimmelmann (1747-1831), who was instrumental in the Royal Decree against slave-trade being formulated and passed. He was clearly affected by the general tendencies and the new Enlightenment view of mankind, the freedom and rights of man, and the question of the decency of trading in human beings. There was also a financial aspect of the wish to forbid slave trade, as it was beginning to become clear that society was moving towards a more humanistic view of all of mankind that would eventually make slave trading difficult. And apart from that there was also the question whether it was even profitable to transport slaves all the longs way over the Atlantic Ocean.

Whatever the bearing arguments might have been, the present decree is a groundbreaking document that catapulted Denmark into a modern, humane world, 15 years before any other country, helping to spark a world-wide legal movement that was absolutely essential in order for the world to evolve into one that is free, humane, and equal for all of mankind.