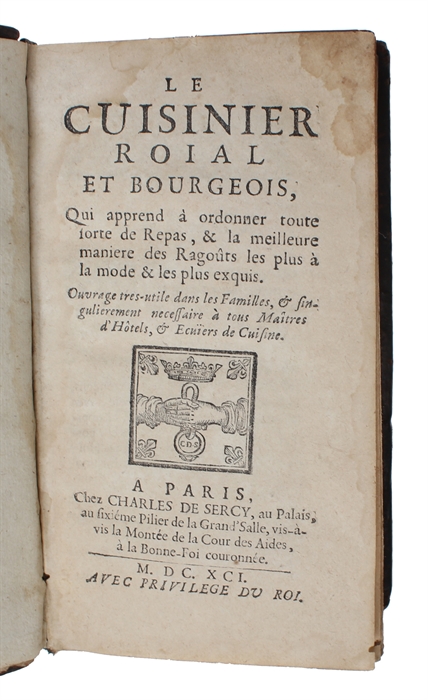 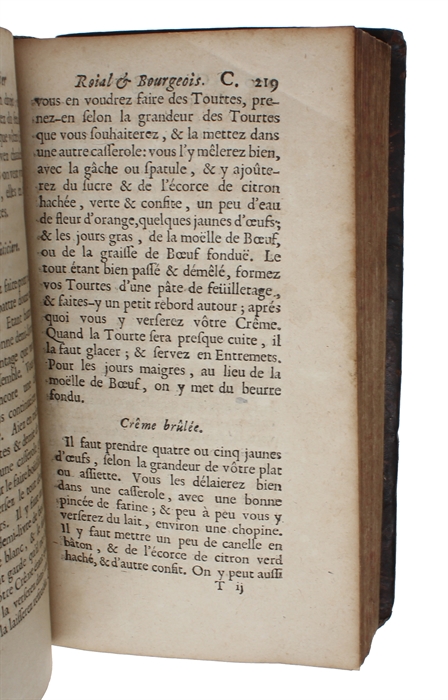 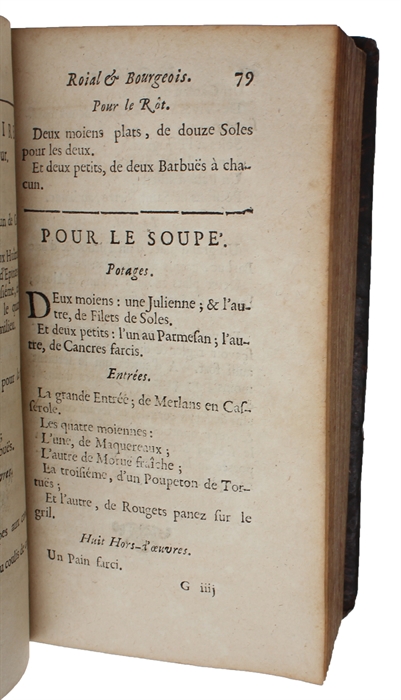 Exceedingly scarce first edition of one of the most important cookbooks ever printed, being the first to contain alphabetized recipes. In this masterpiece in the history of cookery, we find the first printed recipe for crème brulee, the first printed recipe for meringue and the first known food recipes to contain chocolate. Furthermore, Massialot’s magnum opus includes the “Macreuse en ragout au chocolate”, which is possibly the first known Aztec recipe in a European cookbook.

“Massialot, who lived from 1660 to 1733, served as chef de cuisine for various high-ranking Frenchmen, including Philippe I, Duke of Orléans. He’s best known for his “Nouveau cuisinier royal et bourgeois”... In the book he not only laid out recipes for the meals he prepared for royals, but he was also the first to alphabetize recipes, and both meringues and crème brûlée made their first appearances in the book.” (Dan Meyers in The Daily Meal: 10 Chefs Who Changed the Way We Eat).

“Le cuisinier royal et bourgeois” consists of two parts, the first consisting in descriptions of menus for a whole year. Many of these had been prepared at court and both dates and hosts are mentioned in the book. The second part consists in the actual cookbook and constitututes the first cookbook in which the recipes are alphabetically ordered. They are ordered to the chief ingredient and there are often variations for flesh- and fishdays. The book is now worldwide-famous for the invention of crème brulée, for the first recipe of meringue and for the novel recipes containing chocolate: one in a sauce for wigeon or scoter, the other in a sweet custard. Up until then, chocolate had been consumed solely as a drink. Another of Massialot’s innovations presented in the present work is that of adding a glass of white wine to fish stock. The “Macreuse en ragoût au chocolate” (duck stewed in chocolate)-recipe, which also appears here for the first time and is thought to be the first known Aztec recipe in a European cookbook, was reproduced by Alexandre Dumas in his dictionary of cookery in 1872, where he calls it a “masterpiece.”

Massialot was extremely influential, both in France and abroad. The recipes in the present work were initially intended for nobility, but they eventually made their way to public restaurants founded by former cooks of the court after the French Revolution. The book is one of the key foundation stones for restaurants as we know them today.

The work was extremely popular and kept appearing throughout several centuries. A second edition appeared in 1693, a third in 1698, and then it appeared again in 1705 and 1709. In 1712 it was expanded to two volumes and in 1733-34 it was revised and expanded to three.

The work was translated into English as early as 1702 as “The Court and the Country Cook” and had an enormous influence on English cooking as well.

François Massialot (1660, in Limoges– 1733, in Paris) served as chef de cuisine (officier de bouche) to various illustrious personages, including Phillipe I, Duke of Orléans, the brother of Louis XIV, and his son Philippe II, Duke of Orléans. In his preface, Massialot describes himself as "a cook who dares to qualify himself royal, and it is not without cause, for the meals which he describes...have all been served at court or in the houses of princes, and of people of the first rank." Serving banquets at places like the Versailles, this can hardly be said to be an overstatement.

The first edition of this milestone of cookery is of the utmost scarcity. According to OCLC, merely five copies are located worldwide (two in the US and three in Europe) and not a single copy is traceable at actions.