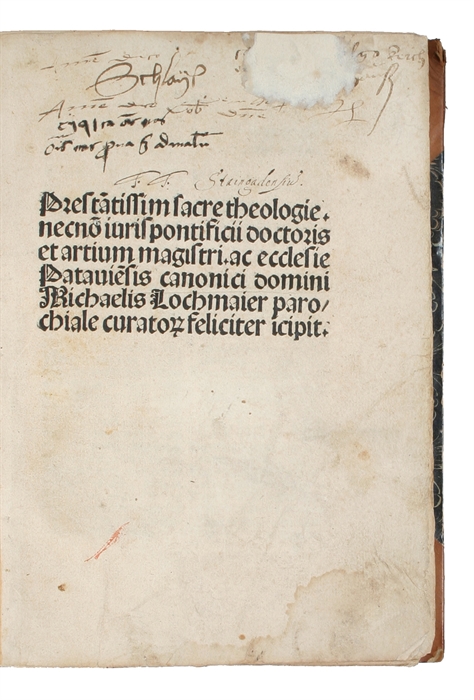 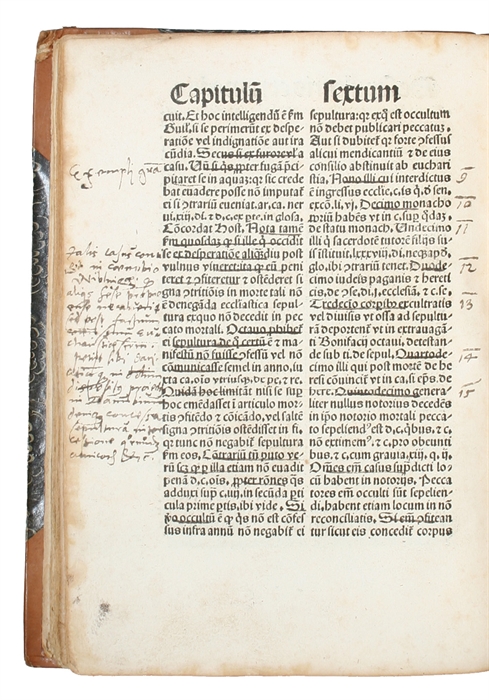 (On colophon:) Hagenau, Henrich Gran for Johannes Rynman, 1498, 20. August. Small quarto. A copy with wide margins. Newer (late 19th century) brown half calf w. gilt red title label and gilt ornamentation to back. Corners bumped. First leaf a bit soiled and with many old owener's names. Repair to upper part of first leaf, due to worm-hole, far prom affecting printed text. The two following leaves with small worm-hole to upper margin, far from affecting text. Occasional soiling and minor brownspotting. Many leaves with contemporary marginal annotations and occasional contemporary underlinings. The marginal annotations have been fully preserved when the book was rebound, and the margins have not been cut. Printed in double columns with 34 lines to each, and headlines; rubricated throughout. (12 (being title and Tabula), 1 (blank), 139) ff. - i.e. with all 152 ff., including the blank, which has been lacking in other identified copies.

Exceedingly scarce incunable-edition (the first printed by Gran) of the first general handbook for parish priests, i.e. the first official parish handbook. Before Lochmaier's "Parrochiale curatorum", parish handbooks were usually written by the individual parish priests for their own use, as no reliable, official or general handbook existed. The "Parrochiale curatorum" describes all that a parish priest needs to know, and as such it is the first work to remedy the great lack of such a work, which had otherwise occasioned merely individual efforts.

Heinrich Gran (active en Hagenau 1489 - 1527) was a highly important German printer, who introduced printing to the German city of Hagenau, which in the 15th century was a city of much greater importance than it is today. Together with Mentelin and Eggestein, he was one of the pioneers of book-printing in Alsace.

The great pioneering publisher Johann Rynmann of Augsburg was one of Gran's most important clients, and the present work constitutes one of their very early collaborations. Between 1501 and 1527, Rynmann financed 174 out of the 213 works that Gran produced during this period.
Incunables by Gran are of great scarcity.