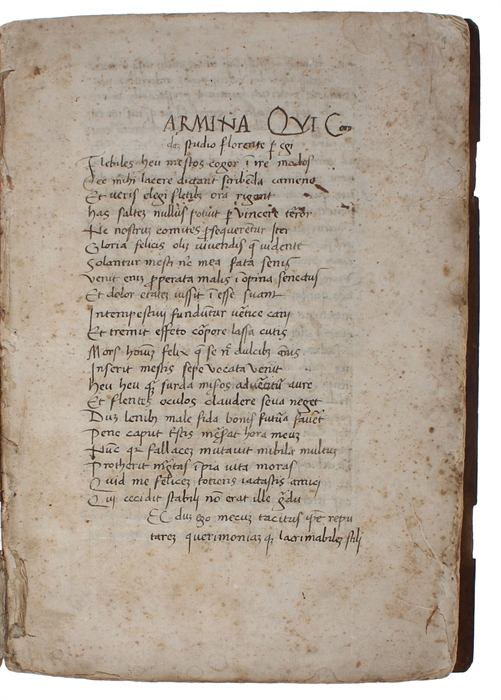 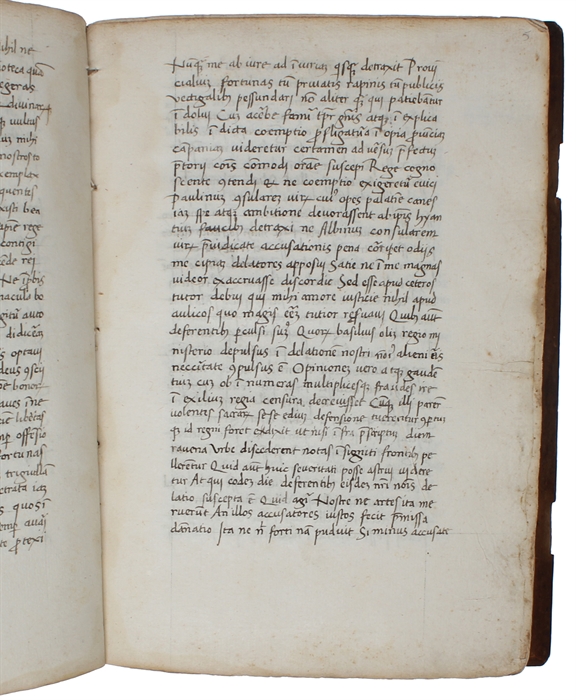 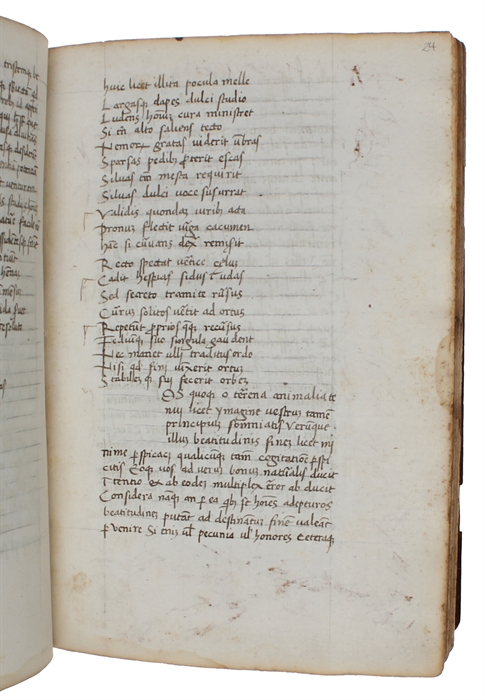 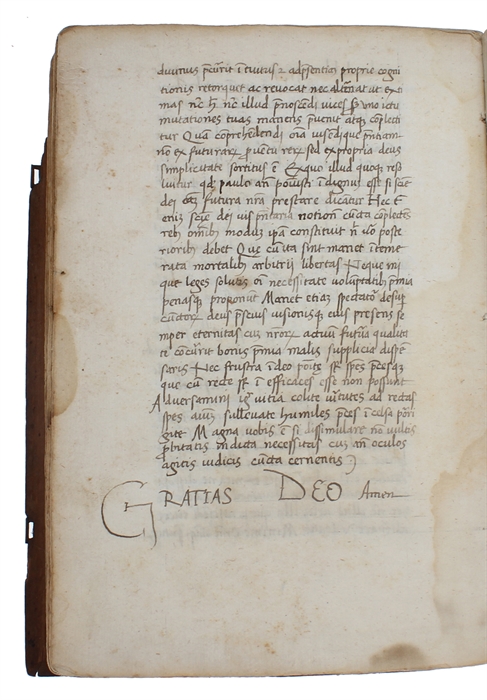 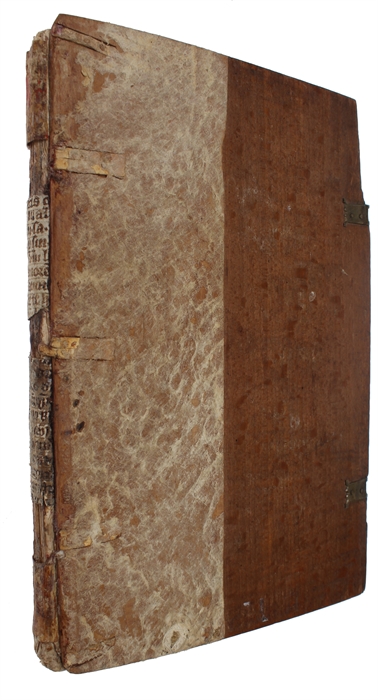 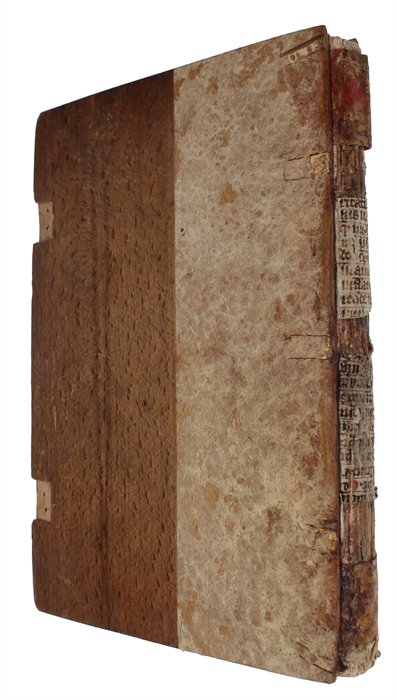 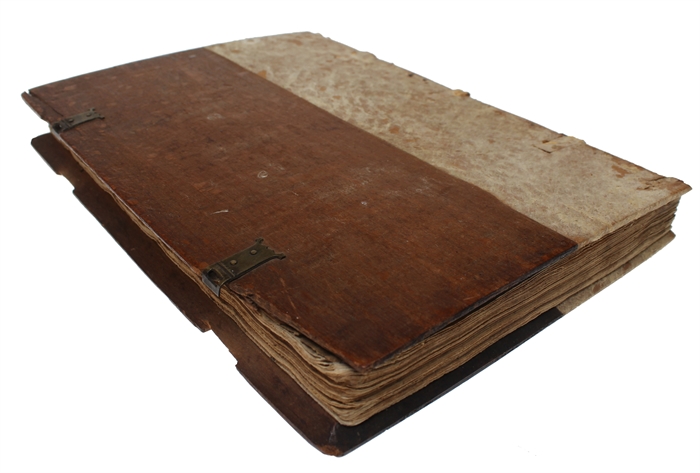 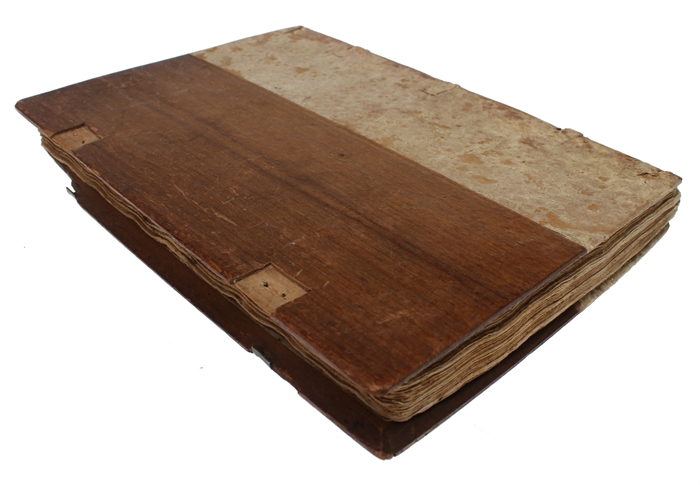 4to. 210x240 mm. In a lovely, strictly contemporary Italian binding. Original wooden boards with beveled edges. Top outer edge of front board chipped and a small split at bottom outer edge. Boards with remnants of the original leather previously partially covering boards, revealing the leather cords, and with an exposed spine revealing four strips of Medieval parchment that hold the quires together (along with a bit of restoration glue, barely noticeable). The top strip with red paint and the other three with fourteenth-century Gothic script. Original brass clasps to front board. An excellent, solid, contemporary binding.

70 ff. (f.70 blank), complete (i-v 12, vi 10), 29 lines to a page, mostly with ruling, occasionally only with frame ruling (150 x 77 mm). Vertical catchwords at the bottom of verso of the last folio of each of quire (i.e. ff. 12, 24, 36, 48, 60), surrounded by wave lines. Written in an easily legible, experienced Italian humanist miniscule. Space (sometimes with cue letters) for initials left blank. No rubrication, but majuscule lettering as headlines at new beginnings or major text divisions.

Large, detailed drawing of pointing hand on f. 3, in contemporary hand. Ff. 8v and 24v with scribbled border in light brown ink around the textblocks, in an early modern hand. Another later hand, presumably a later owner, has added “Jacopi – che qui anno 1693 i Viterbo 1693” in runny ink on f. 29v. Crudely written calculations in the same hand to ff. 59v and 61r.

Front pasted-down end-paper with paste stains, presumably from a previous bookplate, and with a note in 19th century German script to top. Foliation in modern pencil in top right corner throughout.

F1 a bit dusty and with brownspotting. Occasional minor brownspotting. Minor damp staining to margins of last two quires, no loss and not affecting text. Otherwise generally in excellent condition.

Two different watermarks in the paper:

2) the letter P with loop through shaft also (see ff. 64+70, at inner margin). We have not been able to identify this.

Complete version of the text, with some minor word and orthographic variations in comparison to the printed standard version, and without the printed edition’s few lines in Greek. No space has been left for these and they were clearly not intended to be added later.

A truly magnificent and rare complete Medieval manuscript copy of one of the most significant philosophical texts ever written, Boethius’ magnum opus. The seminal Consolation of Philosophy revolutionized modern thought and influenced medieval and renaissance philosophy to an unprecedented degree.

Although one of the most widely read and studied works of the Middle Ages, Medieval manuscript copies of the “Consolation of Philosophy” are very rare on the market. The present manuscript is written in a steady, easily legible, clearly very experienced humanist hand. It does not have the gloss found in most contemporary manuscripts of this sort of text, and is therefore arguably not one of the more usual schoolbooks from the period. It has possibly been copied for the humanist scribe’s own use – in or around Venice during the last quarter of the 15th century – and has thus possibly functioned as a template for other manuscript copies of the text.

Boethius (480-ca. 525) is a difficult figure to place in the history of philosophy. Chronologically, he clearly belongs to late Antiquity, but he is a Christian and he writes in Latin. Thus, as a late antique philosopher, a Christian, and one of the thinkers that influenced the middle ages the most, he has come to represent the very centre of a tradition that goes directly back to Plotinus and thereby indirectly back to Plato and Aristotle. As such, he constitutes one of the single most important thinkers in the entire history of philosophy.

"Only Aristotle himself, and perhaps Augustine, were more important and wide-ranging in their influence... In short it would be hard to understand the development of philosophy in the medieval Latin West without looking carefully at Boethius' work..." (Marenbon pp. 11-12).

Accused of treason against the gothic regime as well as of sorcery, Boethius was imprisoned and later executed, in spite of denying the claims against him. His own theory was that his political activity - as a court official known for defending the weak - was at the core of the accusations against him. He was simply too upright and his enemies were too many. According to historians, the most plausible explanation is that Theoderic doubted the loyalty of the Roman aristocracy and thereby especially the outspoken Boethius.

While in prison, Boethius wrote what was to become one of the most widely read, commented upon, and influential works in the history of philosophy. This highly original work, composed as a philosophical conversation between Boethius himself and the goddess of Philosophy, paved the way for a genre completely unknown at the time; both its style, composition, and contents matter has been imitated hundreds of times since its first appearance.

Though always true to Christianity, this philosophical magnum opus contains many allusions to pagan neo-platonism. During the Middle Ages, however, all passages of the work were very popularly interpreted, in full accordance with Christianity.

Few thinkers have been of such seminal importance to Medieval and Renaissance philosophy and religion as Boethius. Few books were so widely read during the Middle Ages as the "Consolation of Philosophy", and virtually no book has been as major a source of ancient philosophy from the early Middle Ages and throughout the Renaissance as this one. As well of being of great textbook value, this work profoundly inspired and influenced a wide range of influential religious, philosophical and literary writers. "For some writers, such as the Middle English poet, Chauser, the "Consolation" seems to have provided a model for writing about serious issues in a way which presupposes no commitment to Christianity, a philosophical precedent for the use of pagan setting in a literary fiction." (John Marenbon, Medieval Philosophy, 1998, p. 24).

With the death of Boethius, "The first scholastic" (Copenhaver & Schmitt, p. 130), came also the end of ancient tradition of philosophy in the Latin West, though through his writings, the influence of this philosophical tradition was preserved during the Middle Ages and through to the Renaissance and early modern times.

"The last roman author of significance, Boethius, was not a rhetorician, though he had surely received a rhetorical education, but a trained philosopher thoroughly familiar with Greek philosophy and literature. He was a Christian and wrote a few treatises on theology, but his philosophical works show no Christian influence. The "Consolation of Philosophy" is a highly personal and original work imbued with Stoic and Neoplatonic conceptions that has continued to impress its readers to its present day although it is no longer as widely read as it was in former centuries." (Kristeller, p. 226).

"The crowning work of his life, the "Philosophiae Consolatio", was composed in prison not long before his death. It is in the form of a dialogue, and includes 39 short poems in 13 different metres... Throughout the work there is no evidence of distinctively Christian belief, but there are a few phrases of apparently Christian origin... But the absence of all reference to the consolations of religion is much more remarkable than the presence of a few phrases such as these... He does not oppose any Christian doctrine, but his attitude is that of a Theist and not that of a Christian. He supplied the Middle Ages with an eclectic manual of moral teaching severed from dogma and endued with all the charm of exquisite verse blended with lucid prose; and, as the latest luminary of the ancient world, he remained long in view, while the sources of the light he reflected were forgotten. The masterpiece which was his last legacy to posterity was repeatedly translated, expounded and imitated in the Middle Ages, and these translations were among the earliest literary productions of the vernacular languages of Europe, - English, French, German, Italian and Spanish among the translators being names of no less importance than king Alfred, Chaucer and queen Elizabeth. It was also translated into Greek by Maximus Pledanus (d. 1310). The emperor Otho III, who died in 1002, a hundred years after Alfred, placed in his library a bust of Boëthius, which was celebrated by the best Latin poet of his age, the future pope Silvester II. Three centuries later, he is quoted more than 20 times in the "Convito" and elsewhere by Dante, whose best-known lines "Nessun maggior dolore Che ricordarsi del tempo felice Nelle miseris", are a reminiscence of Boëthius... Dante places him in the Fourth Heaven among the twelve "living and victorious splendours" which are the souls of men learned in Theology... Two hundred years after Dante, the book of Consolation composed by Boëthius in the "Tower of Pavia" brought solace to Sir Thomas More in the Tower of London. It has since won the admiration of the elder Scaliger and Casaubon, and has been described as a "golden volume" by Gibbon, who eulogises its author as "the last of the Romans whom Cato or Tully could have acknowledged for their countryman." (Sandy's I: 256-58).