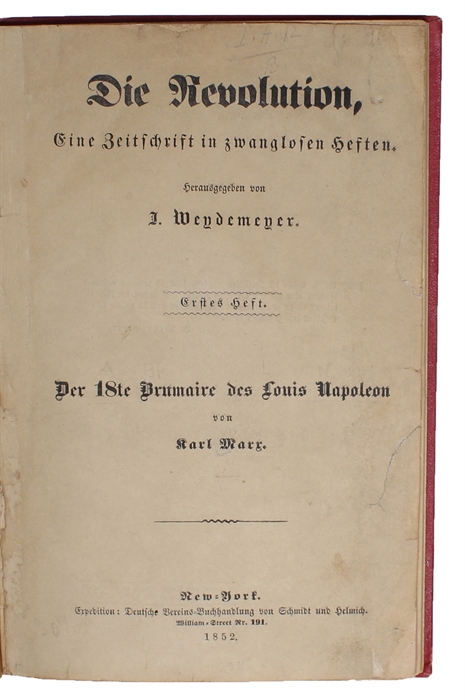 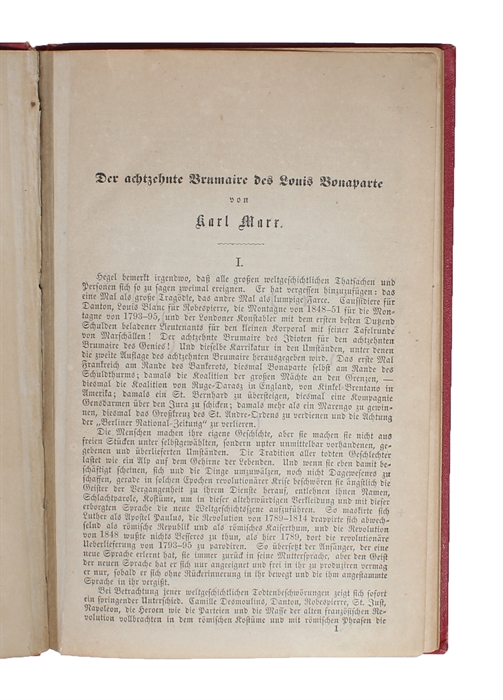 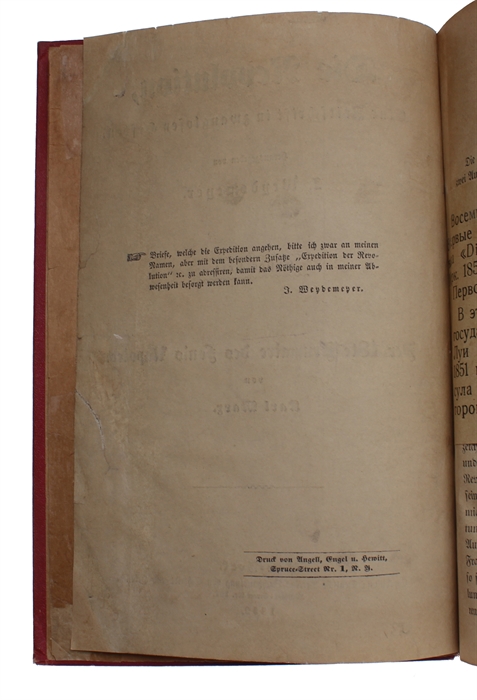 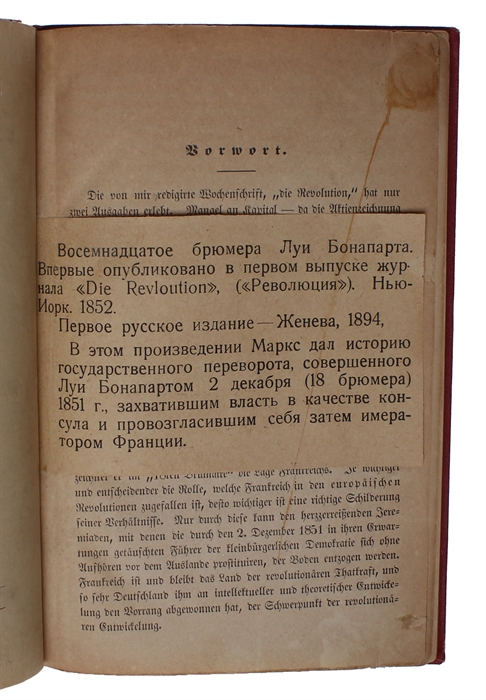 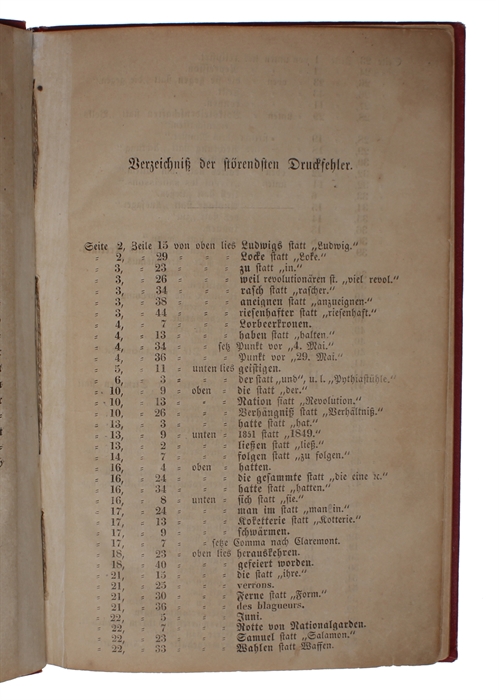 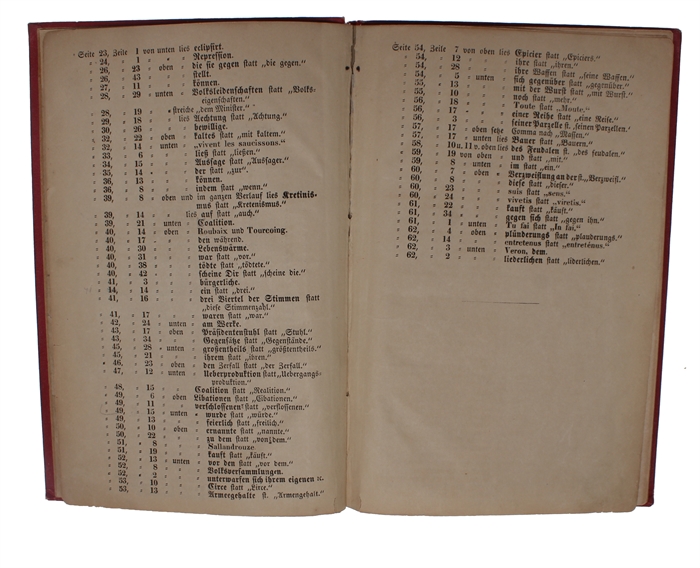 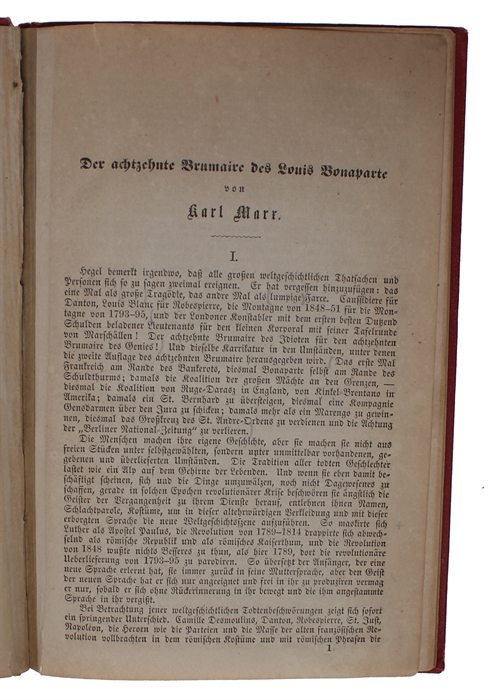 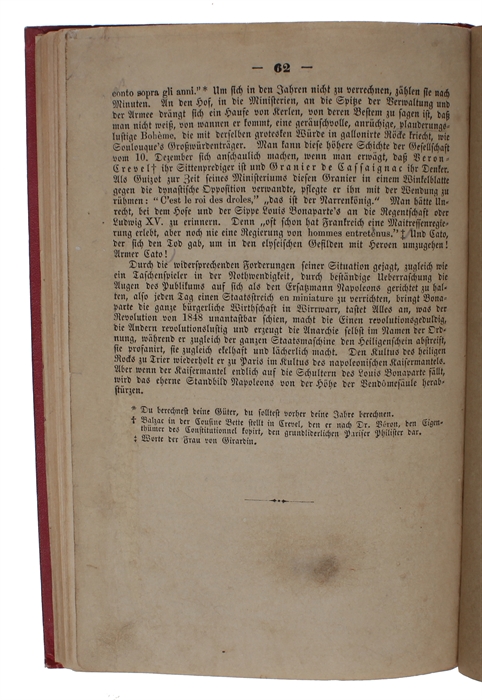 THE MOST IMPORTANT PROPOSITIONS IN THE MARXIST TEACHING ON THE STATE

Bound in a later (ab. 1900) red full cloth binding with silver lettering to front board. A bit of wear to capitals, corners, and extremities. Front free end-paper with small repairs and strengthening. A couple of closed tears to blank outer margin of title-page (no loss and not affecting printing)Inner blank margins of the first few leaves strengthened (far from affecting text). Occasionally a few marginal notes. and underlinings. A near contemporary notice in Russian about the work has been inserted between the title-page and the preface. All in all a good copy with no major flaws. IV, (4), 62 pp.

The exceedingly scarce first edition of one of the absolutely most important writings by Marx - his seminal essay on the French coup of 1851, which not only constitutes our principal source for the understanding of Marx' theory of the Capitalist state (together with "The Civil War in France"), but which is also the work in which Marx formulates for the first time his view of the role of the individual in history.

"This work (i.e. "The Eighteenth Brumaire"), written on the basis of a concrete analysis of the revolutionary events in France from 1848 to 1851, is one of the most important Marxist writings. In it Marx gives a further elaboration of all the basic tenets of historical materialism - the theory of the class struggle and proletarian revolution, the state and the dictatorship of the proletariat. Of extremely great importance is the conclusion which Marx arrived at on the question of the attitude of the proletariat to the bourgeois state. He says, - "All revolutions perfected this machine instead of smashing it.". Lenin described it as one of the most important propositions in the Marxist teaching on the state.

In The Eighteenth Brumaire of Louis Bonaparte Marx continued his analysis of the question of the peasantry, as a potential ally of the working class in the imminent revolution, outlined the role of the political parties in the life of society and exposed for what they were the essential features of Bonapartism." (note 1 in the Preface to the Third German Edition (Engels, 1885) ).

"The Eighteenth Brumaire of Louis Napoleon" was written between December 1851 and March 1852 and originally published - as it is here - in 1852 in "Die Revolution", a German monthly magazine established by Joseph Weydemeyer and published in New York.

In this cornerstone of modern political thought, Marx discusses the French coup of 1851 in which Louis-Napoléon Bonaparte assumed dictatorial powers and does so by treating actual historical events from the viewpoint of his materialist conception of history.

Marx states that his purpose with the work is to "demonstrate how the class struggle in France created circumstances and relationships that made it possible for a grotesque mediocrity to play a hero's part" (preface to the second edition, 1869), and he famously formulates his view of the role of the individual in history ("Men make their own history, but they do not make it as they please; they do not make it under self-selected circumstances, but under circumstances existing already, given and transmitted from the past").

If one wants to understand Marx' views on the capitalist state, "The 18th Brumaire" is absolutely essential, as it is to the understanding of the nature, the rise, and the meaning of fascism. Among Marxist scholars, there's wide consensus about regarding Louis Bonaparte's coup and rise to power as a forerunner of the fascism that is to emerge the 20th century.

In the words of Engels: "The fact that a new edition of "The Eighteenth Brumaire" has become necessary, thirty-three years after its first appearance, proves that even today this little book has lost none of its value. It was in truth a work of genius. Immediately after the event that struck the whole political world like a thunderbolt from the blue, that was condemned by some with loud cries of moral indignation and accepted by others as salvation from the revolution and as punishment for its errors, but was only wondered at by all and understood by none-immediately after this event Marx came out with a concise, epigrammatic exposition that laid bare the whole course of French history since the February days in its inner interconnection, reduced the miracle of December 2 to a natural, necessary result of this interconnection and in so doing did not even need to treat the hero of the coup d'état otherwise than with the contempt he so well deserved. And the picture was drawn with such a master hand that every fresh disclosure since made has only provided fresh proofs of how faithfully it reflected reality. This eminent understanding of the living history of the day, this clear-sighted appreciation of events at the moment of happening, is indeed without parallel. ...

In addition, however, there was still another circumstance. It was precisely Marx who had first discovered the great law of motion of history, the law according to which all historical struggles, whether they proceed in the political, religious, philosophical or some other ideological domain, are in fact only the more or less clear expression of struggles of social classes, and that the existence and thereby the collisions, too, between these classes are in turn conditioned by the degree of development of their economic position, by the mode of their production and of their exchange determined by it. This law, which has the same significance for history as the law of the transformation of energy has for natural science - this law gave him here, too, the key to an understanding of the history of the Second French Republic. He put his law to the test on these historical events, and even after thirty-three years we must still say that it has stood the test brilliantly." (Preface to the Third German Edition (Engels, 1885)).

The work is incredibly scarce. OCLC lists no more than two copies in libraries world-wide: One in the USA: University of Wisconsin, one in France: Bibliothèque Nationale. We have not been able to locate a single copy at auction over the last 60 years.