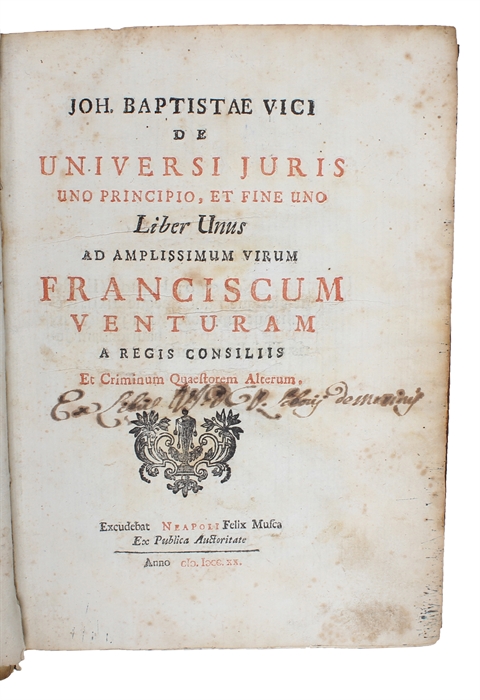 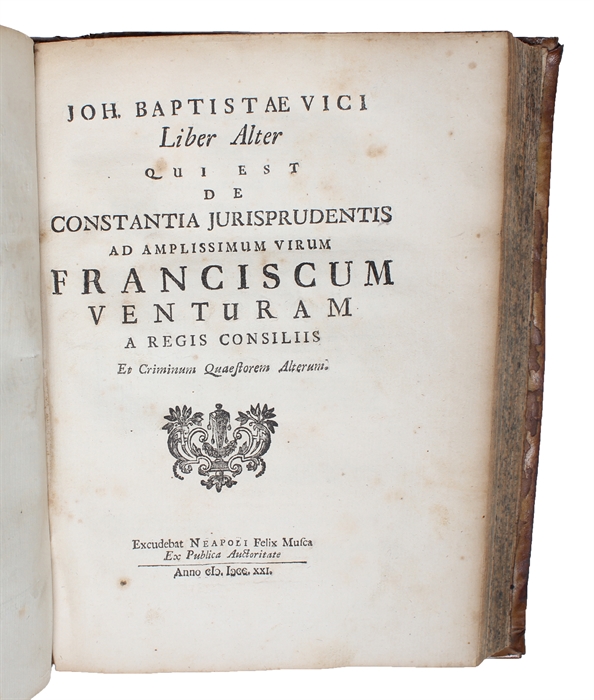 THE FIRST FORMULATION OF THE NEW SCIENCE

4to. Bound together in one contemporary full vellum bindingwith old, faded title in ink to spine. A vertical crack to the spine, but binding fine and tight. A bit of wear to extremities. A bit soiled, but all in all good and completeley unrestored. Some quires quite browned and some quires with brownspotting. Book-plate to inside of front board (LA Law Library) and contemporary owner's signature to title-page (De Marinis). Some contemporary underlinings and marginal pointers to the first leaves. First title printed in red and black. (4), 195, (1) pp. + (4), 260 pp.

The exceedingly scarce first edition of what is arguably Vico's magnum opus, his great work on law, which is now generally accepted as the first version of his New Science, due to which Vico is now considered one of the most important philosophers of all times.

The work consists in the two books known as "De Uno" and "De Constantia" that were published separately in 1720 and 1721 respectively. They are almost always bound together and we know that all copies of that Vico gave away contain both works. Having finished his magnum opus, he couldn't put it away and began making extensive notes and revisions - evident from the extremely annotated copy that he himself had, where not a single margin was left blank. These annotations were later published as his "Notae" and sometimes accompany the first two books to make up what is known as the "Diritto Universale" (or "Universal Right"). .

It is in this magnificent work of law - these two books that constitute the most comprehensive work that Vico ever wrote - that the thoughts that lie at the heart of Vico's philosophy are formulated for the first time. "The new Science" is an extension of that invented in his "De Constantia", and it is here that we find for the first time Vico's philosophy of history. It is thus in the present work, not in the "New Science" as often thought, that we find the groundbreaking interpretation of history as the product of the actions of men - the "Verum-factum"-identity, which is at the core of not only the "New Science", but of all his later thought.

Though most scholars today agree that the present work is the most important of all of Vico's work, outshadowing even "The New Science", the work has been neglected and overlooked for decades. In many ways, the reason for this could be found with Croce and his work on Vico from 1923. "Croce minimized Vico's contributions in the domain of the philosophy of law. Gianturco is firmly convinced that the most certain result of the Crocean monograph on Vico was to direct on the "New Science" such a dazzling light and to make of it such a seducing, glowing star as to establish it in the center of the firmament of Vichian research. Thus, the "New Science" eclipses the extraordinary achievements in the juridical sphere that are found in the "De Uno". As Gianturco began to develop his thesis with arguments derived from the history of juridical thought, he advises readers to free themselves of this kind of favoritism for the "New Science" and to clear the eyes of their mind of the blindness that does not allow them to see where other, perhaps even greater, merits of Vico are to be found... It is necessary for us to perform a kind of "Copernican" turning, a reorientation of our categories. It is necessary to assume that the North Star of our research, the cynosure of our attention, is no longer the "Scienza nuova", but "Diritto universale... (From the preface to the English translation of Vico's "Universal Right", Pinton & Diehl, edt., p. xlv).

And this is a notion backed by virtually all modern Vico-scholars - the "De Uno" and the "De Constantia" (together "Diritto Universale") are considered absolutely central in Vico's philosophy and as the starting point of all of his unique and monumental ideas. "Michael Mooney, from the beginning of his work of 1985 on Vico's rhetoric, points out the correlation that exists between "Institutiones Oratoriae" and "Diritto universal" in regard to the importance of philology as the leit-motif of all, let us say, using Gianturco's image, the Vichian firmament. Mooney confirms that the merit goes to Vico for having developed philology not merely to an art, but to a science, by means of all the groundwork done in "Diritto universal", working out a system of civilization, of commonwealths, laws, poetry, history - in a word, of the whole human culture. Thus, Vico carefully thought out a scientific philology." (Pinton & Diehl, p. xlv).

The present work marks a significant step in the redefinition of the relationship between metaphysics and philosophical questions of law. Vico connects natural and historic law and creates a new notion of the natural right of people that theorizes the historic right of nations. Uinifying human and divine knowledge, Vico creates a new theory of law, philosophy, and history.

"Giambattista Vico is often credited with the invention of the philosophy of history. Specifically, he was the first to take seriously the possibility that people had fundamentally different schema of thought in different historical eras. Thus, Vico became the first to chart a course of history that depended on the way the structure of thought changed over time.

To illustrate the difference between modern thought and ancient thought, Vico developed a remarkable theory of the imagination. This theory led to an account of myth based on ritual and imitation that would resemble some twentieth century anthropological theories. He also developed an account of the development of human institutions that contrasts sharply with his contemporaries in social contract theory. Vico's account centered on the class struggle that prefigures nineteenth and twentieth century discussions.

Vico did not achieve much fame during his lifetime or after. Nevertheless, a wide variety of important thinkers were influenced by Vico's writings. Some of the more notable names on this list are Johann Gottfried von Herder, Karl Marx, Samuel Taylor Coleridge, James Joyce, Benedetto Croce, R. G. Collingwood and Max Horkheimer. References to Vico's works can be found in the more contemporary writings of Jürgen Habermas, Hans-Georg Gadamer, Alasdair MacIntyre and many others.

There is no question that his work is difficult to grasp. Vico's style is challenging. Further, he is heavily influenced by a number of traditions that many philosophers may find unfamiliar: the natural law tradition of thinkers like Grotius; the Roman rhetorical tradition of authors like Quintillian; and the current science and anthropology of his day. Nevertheless, Vico's theories on culture, language, politics and religion are deeply insightful and have excited the imaginations of those who have read him." (IEP).

The work is of the utmost scarcity, with merely one copy appearing at auction within the last 50 years and with very few copies in libraries world-wide (especially containing both parts).