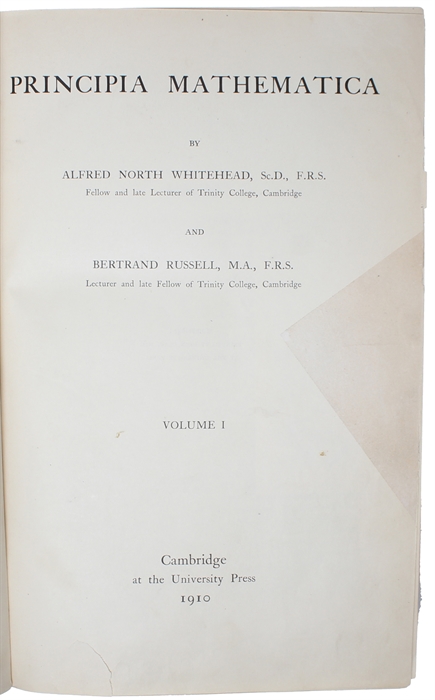 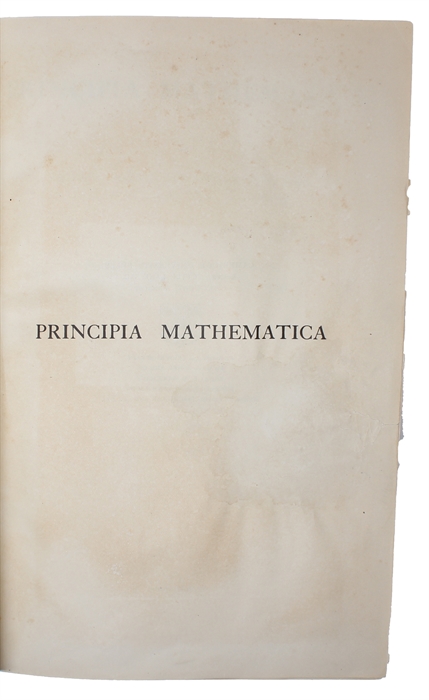 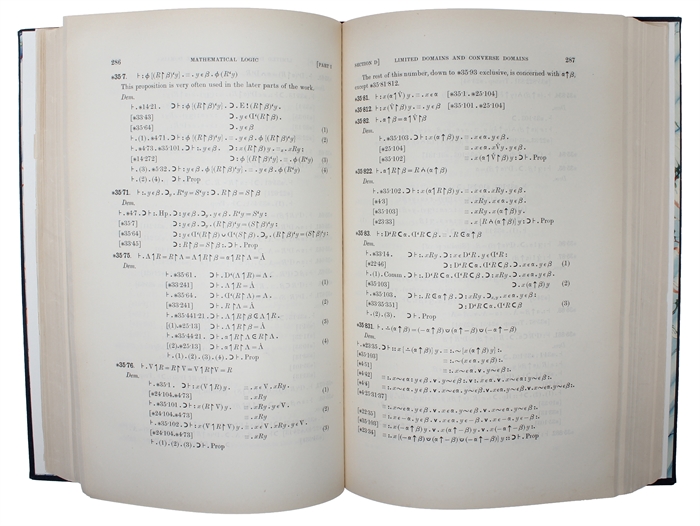 THE BIBLE OF MODERN LOGIC

The seminal first edition of the first volume of the landmark work that founded modern mathematical logic and came to define research in the foundations of mathematics throughout the 20th century.

"Principia Mathematica" proved to be remarkably influential in at least three ways. First, it popularized modern mathematical logic to an extent undreamt of by its authors. By using a notation superior to that used by Frege, Whitehead and Russell managed to convey the remarkable expressive power of modern predicate logic in a way that previous writers had been unable to achieve. Second, by exhibiting so clearly the deductive power of the new logic, Whitehead and Russell were able to show how powerful the idea of a modern formal system could be, thus opening up new work in what soon was to be called metalogic. Third, Principia Mathematica re-affirmed clear and interesting connections between logicism and two of the main branches of traditional philosophy, namely metaphysics and epistemology, thereby initiating new and interesting work in both of these areas.
As a result, not only did Principia introduce a wide range of philosophically rich notions (including propositional function, logical construction, and type theory), it also set the stage for the discovery of crucial metatheoretic results (including those of Kurt Gödel, Alonzo Church, Alan Turing and others). Just as importantly, it initiated a tradition of common technical work in fields as diverse as philosophy, mathematics, linguistics, economics and computer science." (SEP)

""Principia Mathematica", the landmark work in formal logic written by Alfred North Whitehead and Bertrand Russell, was first published in three volumes in 1910, 1912 and 1913. A second edition appeared in 1925 (Volume 1) and 1927 (Volumes 2 and 3). In 1962 an abbreviated issue (containing only the first 56 chapters) appeared in paperback. In 2011 a digest of the book's main definitions and theorems, originally transcribed by Russell for Rudolf Carnap, was reprinted in The Evolution of Principia Mathematica, edited by Bernard Linsky.
Written as a defense of logicism (the thesis that mathematics is in some significant sense reducible to logic), the book was instrumental in developing and popularizing modern mathematical logic. It also served as a major impetus for research in the foundations of mathematics throughout the twentieth century. Along with Aristotle's Organon and Gottlob Frege's Grundgesetze der Arithmetik, it remains one of the most influential books on logic ever written." (SEP).