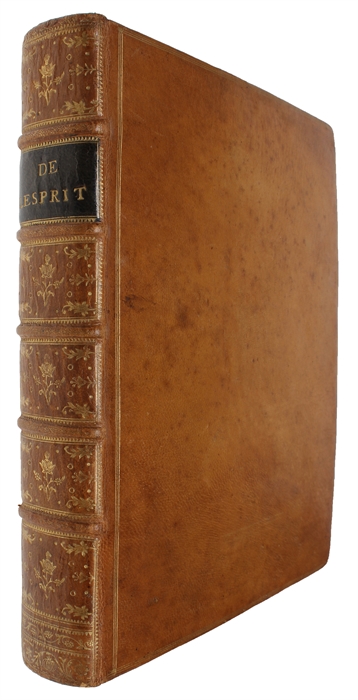 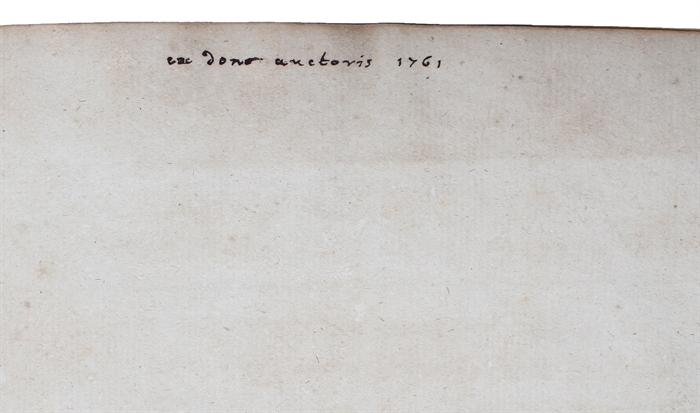 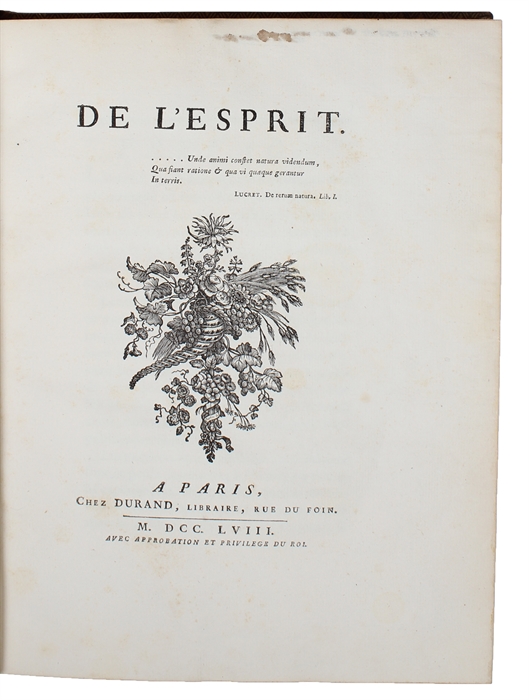 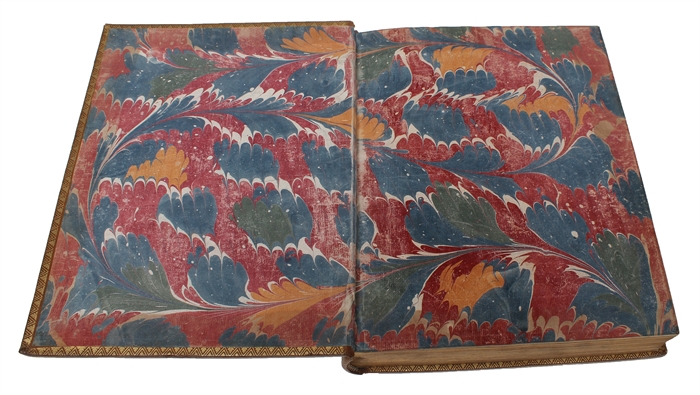 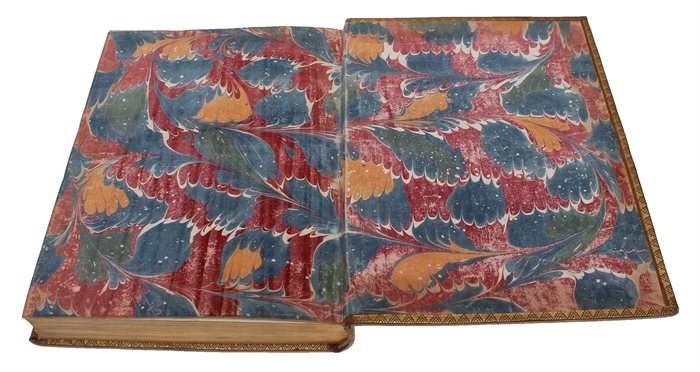 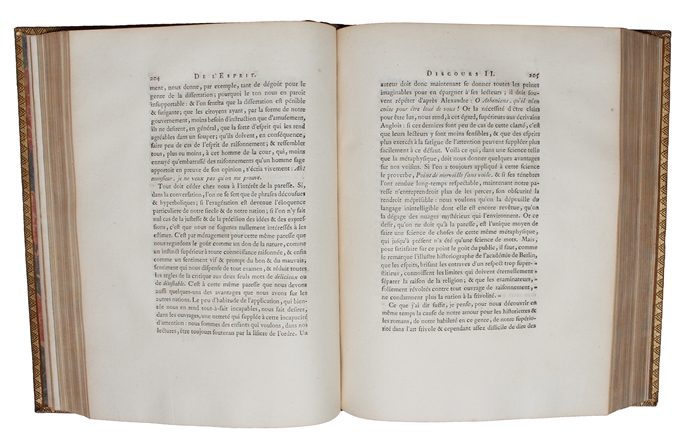 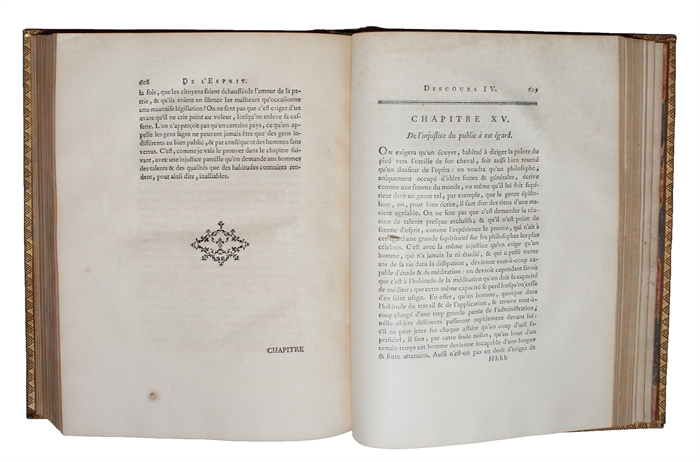 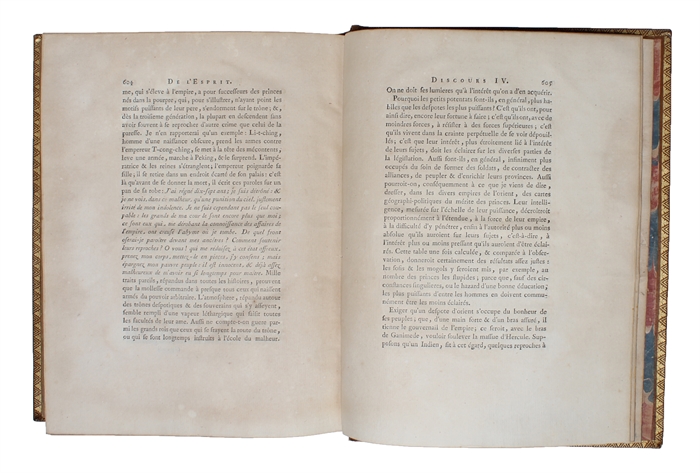 Extremely rare first edition, first issue, with manuscript dedication-inscription from the author, of this monumental work of the French Enlightenment. This magnum opus of modern thought is considered the founding work of modern Utilitarianism, as it is here that Helvétius articulates the greatest happiness principle ("the greatest happiness for the greatest number") for the first time and becomes the first to define social welfare upon this utilitarian maxim, directly influencing Bentham and Mill.

The materialistic philosophy of Helvétius' "De l'Esprit" also directly influenced Karl Marx, who had studied the work while in Paris and called the ideas presented in it "the social basis of communism".

"De l'Esprit" arguably constitutes the greatest "succès de scandale" of Western thought and one of the most influential works of Western philosophy.

This magnificent copy is stunning in all ways. It contains all the extremely rare condemned and repressed leaves of the first issue (bound in the back), it is printed on large paper, contemporarily bound (presumably under instruction by Helvétius himself) in a stunning full calf gift binding and with two manuscript ex-dono- (presentation-) inscriptions by Helvétius himself. One of them, on the verso of the title-page, is crossed out, but is still legible (reading "donum auctoris 17 avril 1760 Cl. Helvetius"), the second, on the front free end-paper reads "ex dono auctoris 1761" - thus indicating that Helvétius, who had the copy in his possession, to give away when he felt it appropriate, had first intended to give it away - perhaps late in the year - in 1760, and then ended up giving it away in 1761.

The work lost its privilege almost immediately, and even though Hélvetius wrote three retractions, it was still condemned and publicly burnt. In spite of this, Helvétius still kept a few copies of the very first issue, with all the original leaves. According to Smith, 15 copies existed, and as Jacques Guérin also notes, these copies were all intended for his close friends and family (we know for instance that Rousseau received one of the copies). These copies, of which the present is one, are thus of the utmost scarcity. Only one other has been on the market within the last 25 years, namely that of Jacques Guérin, which, however, did not have a dedication-inscription from Helvétius.

As Tchermerzine describes, the extremely rare copies of the first issue, which are either without the newly formulated leaves or with the original leaves preserved (our copy has them all!) are between 10 and 60 times as valuable as the later issues, depending on condition - these between 4 and 15 copies are the only ones to contain the 80 revolutionary pages that caused the work to be condemned and burnt and sent Helvétius into exile. Tchermerzine does not, however, account for copies with a presentation-inscription like the present.

The work caused an immense uproar, when it appeared. It was considered so heretical, atheistic, and immoral that it lost its privilege within a fortnight; it was heavily condemned by the Church and the State and was burnt by the Hangman, the plan being to destroy all copies of it. Few books in the entire history of printing have been met with such opposition - it was condemned by both the son of Louis XV and the Sorbonne, and the priests succeeded in convincing the court that the doctrines were so dangerous that even though Helvetius wrote three retractions, the book was still publically burned; and when the Encyclopédie of Diderot and d'Alembert was suppressed for the second time, this had much to do with Helvétius' De l'Esprit and the scandal it had caused.
This scandalous work, however, gained so much attention that it was almost immediately translated into all European languages, contributing to the immense influence it came to have on all European thought.

"The history of Helvetius's De l'esprit (1758), his first major work, is eventful, complicated and paradoxical. No book during the eighteenth century, except perhaps Rousseau's Emile, evoked such an outcry from the religious and civil authorities or such universal public interest. Condemned as atheistic, materialistic, sacrilegious, immoral and subversive, it enjoyed a remarkable succes de scandale. The work lost its privilege within a fortnight of its publication. It was attacked in Church periodicals and in polemical pamphlets, in the literary salons and in popular songs, from bishops' pulpits and from the stage of the Théâtre francais. Though Helvetius retracted his book three times, he was condemned by the Archbishop of Paris (Nov. 1758), the Pope (Jan. 1759), the Parlement of Paris (Feb. 1759), the Sorbonne (Apr. 1759) and by various bishops." (Smith, p. 332).

"In "De l'ésprit" (1758), Helvétius follows the Lockean sensationalism of Condillac and pairs it with the claim that human beings are motivated in their actions only by the natural desire to maximize their own pleasure and minimize their pain. "De l'ésprit", though widely read, gives rise to strong negative reactions in the time, both by political and religious authorities (the Sorbonne, the Pope and the Parlement of Paris all condemn the book) and by prominent fellow philosophes, in great part because Helvétius's psychology seems to critics to render moral imperatives and values without basis, despite his best attempts to derive them. Helvétius attempts to ground the moral equality of all human beings by portraying all human beings, whatever their standing in the social hierarchy, whatever their special talents and gifts, as equally products of the nature we share plus the variable influences of education and social environment." (SEP).