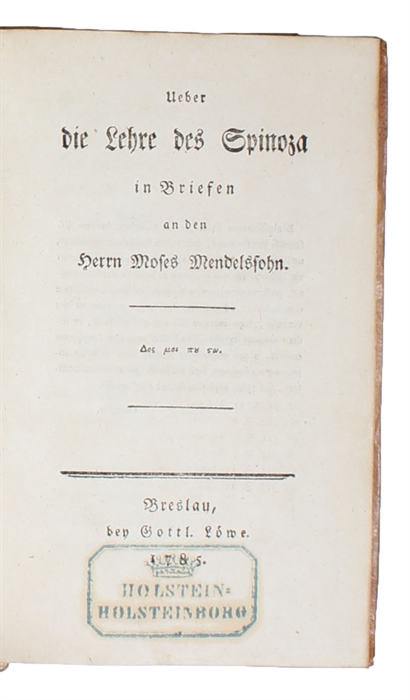 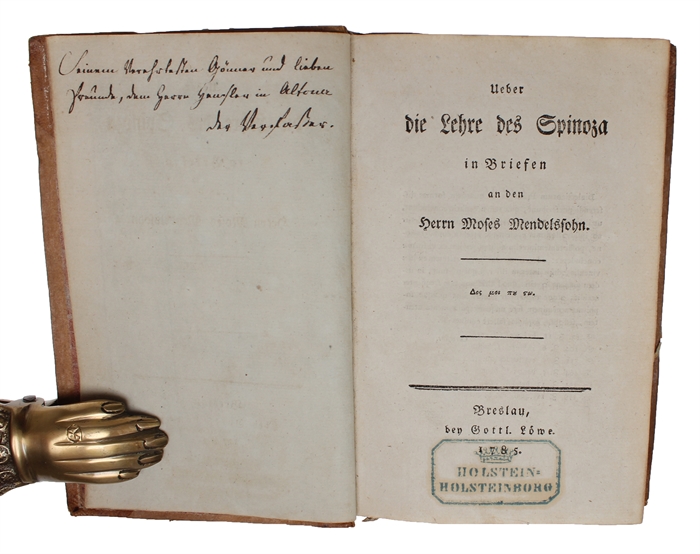 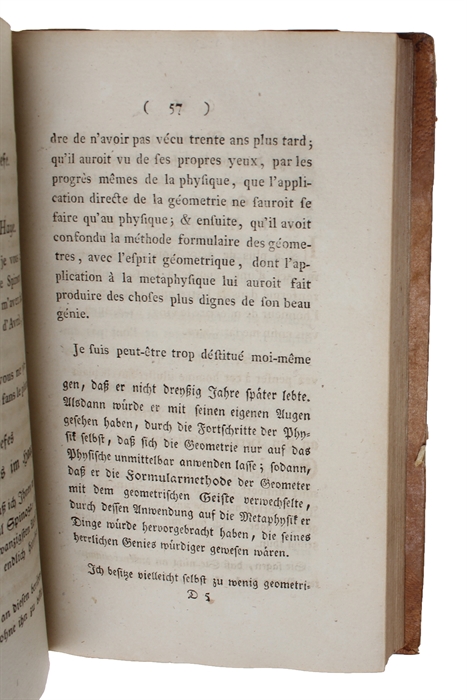 8vo. Nice contemporary half calf with five raised bands, gilt lines, and gilt title-label to spine. A bit of wear to extremities. Internally very nice and clean. Printed on good paper. A stamp to title-page (Holsteinborg). Inscribed by the author on front free end-paper. (8)215, (1, - errata) pp.

A magnificent presentation-copy of the rare first edition, first issue (with the "S. das Gedicht am Ende des Briefes"-note on p. 11) of this milestone of 18th century thought, one of the most scandalous books of its time, the work that reintroduced Spinoza to a society otherwise dominated by French Enlightenment thinking, and the work that begain the famous "Pantheismusstreit", one of the most important feuds in German philosophy.

Presentation-copies by Jacobi are of the utmost scarcity and hardly ever come on the market. The present copy bears a two-line inscription to the famous physician Philipp Hensler, signed "The Author", on the front free end-paper: "Seinem verehrtesten Gönner und lieben/ Freunde, dem Herrn Hensler in Altona/ Der Verfasser". The city of Altona plays a significant role in late 18th century German thought, as many of the most important thinkers of the period pass through there. In the late 18th century, Altona developed into the centre of Enlightenment in Northern Germany. It is here that Jacobi meets Hensel, who comes to play an important role in his life, as is also evident from the present inscription ("honoured benefactor and dear friend").
Philipp Gabriel Hensler (1733-1805) was a famous German doctor, an outstanding physician, who is still famous today for his pioneering work in hygiene statistics and in pox-inoculation. He was so famous in his time that for a time he was the preferred choice for the position of private doctor to the Danish King Christian VII, right up until that historical moment when Struensee was chosen instead. When Struensee was given the position, Hensler was given Struensee's old position as physician in Altona.

With the first edition of "Ueber die Lehre des Spinoza" (1785), Jacobi begins the famous "PATHEISMUSSTREIT", which focused attention on the apparent conflict between human freedom and any systematic, philosophical interpretation of reality.

In 1780, Jacobi (1743-1819), famous for coining the term nihilism, advocating "belief" and "revelation" instead of speculative reason, thereby anticipating much of present-day literature, and for his critique of the Sturm-und-Drang-era, had a conversation with Lessing, in which Lessing stated that the only true philosophy was Spinozism. This led Jacobi to a protracted and serious study of Spinoza's works. After Lessing's death, in 1783 Jacobi began a lengthy letter-correspondende with Mendelssohn, a close friend of Lessing, on the philosophy of Spinoza. These letters, with commentaries by Jacobi, are what constitute the first edition of "Ueber die lehre des Spinoza". The work caused great furor and the enmity of the Enlightenment thinkers. Jacobi was ridiculed by his contemporaries for attempting to reintroduce into philosophy belief instead of reason, was seen as an enemy of reason and Enlightenment, as a pietist, and as a Jesuit.

But the publication of the work not only caused great furor in wider philosophical circles, there was also a personal side to the scandal which has made it one of the most debated books of the period:
"Mendelssohn enjoyed, as noted at the outset, a lifelong friendship with G. E. Lessing... Along with Mendelssohn, Lessing embraced the idea of a purely rational religion and would endorse Mendelssohn's declaration: "My religion recognizes no obligation to resolve doubt other than through rational means; and it commands no mere faith in eternal truths" (Gesammelte Schriften, Volume 3/2, p. 205). To pietists of the day, such declarations were scandalous subterfuges of an Enlightenment project of assimilating religion to natural reason... While Mendelssohn skillfully avoided that confrontation, he found himself reluctantly unable to remain silent when, after Lessing's death, F. H. Jacobi contended that Lessing embraced Spinoza's pantheism and thus exemplified the Enlightenment's supposedly inevitable descent into irreligion.
Following private correspondence with Jacobi on the issue and an extended period when Jacobi (in personal straits at the time) did not respond to his objections, Mendelssohn attempted to set the record straight about Lessing's Spinozism in "Morning Hours". Learning of Mendelssohn's plans incensed Jacobi who expected to be consulted first and who accordingly responded by publishing, without Mendelssohn's consent, their correspondence - "On the Teaching of Spinoza in Letters to Mr. Moses Mendelssohn" - a month before the publication of "Morning Hours". Distressed on personal as well as intellectual levels by the controversy over his departed friend's pantheism, Mendelssohn countered with a hastily composed piece, "To the Friends of Lessing: an Appendix to Mr. Jacobi's Correspondence on the Teaching of Spinoza". According to legend, so anxious was Mendelssohn to get the manuscript to the publisher that, forgetting his overcoat on a bitterly cold New Year's eve, he delivered the manuscript on foot to the publisher. That night he came down with a cold from which he died four days later, prompting his friends to charge Jacobi with responsibility for Mendelssohn's death.
The sensationalist character of the controversy should not obscure the substance and importance of Mendelssohn's debate with Jacobi. Jacobi had contended that Spinozism is the only consistent position for a metaphysics based upon reason alone and that the only solution to this metaphysics so detrimental to religion and morality is a leap of faith, that salto mortale that poor Lessing famously refused to make. Mendelssohn counters Jacobi's first contention by attempting to demonstrate the metaphysical inconsistency of Spinozism. He takes aim at Jacobi's second contention by demonstrating how the "purified Spinozism" or "refined pantheism" embraced by Lessing is, in the end, only nominally different from theism and thus a threat neither to religion nor to morality." (SEP).