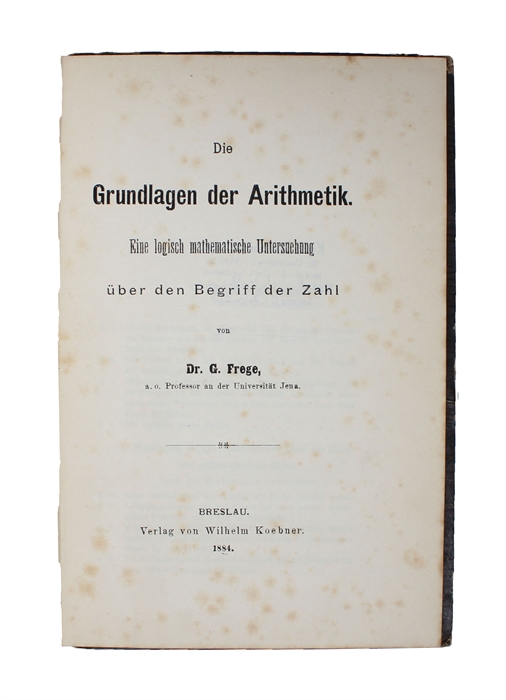 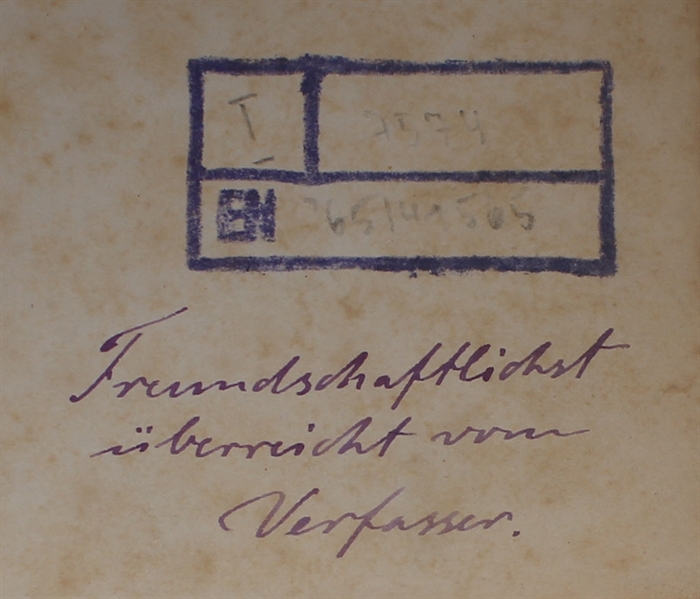 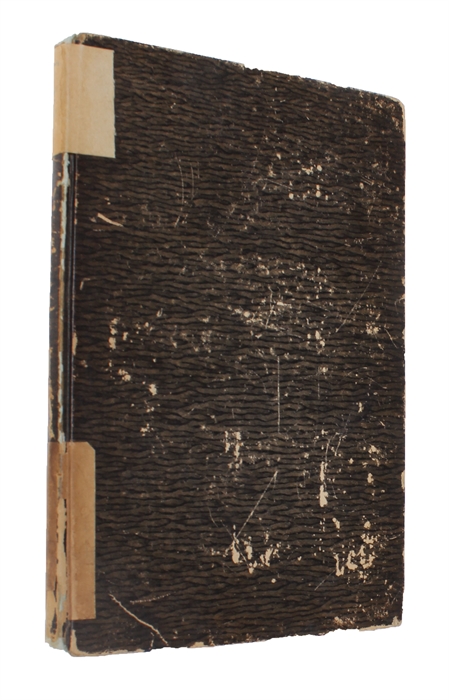 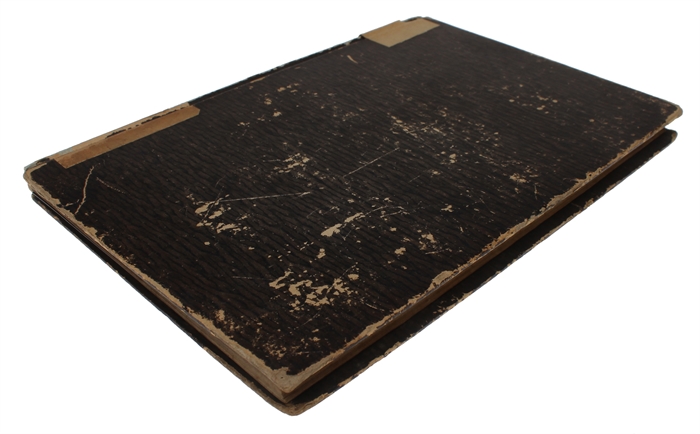 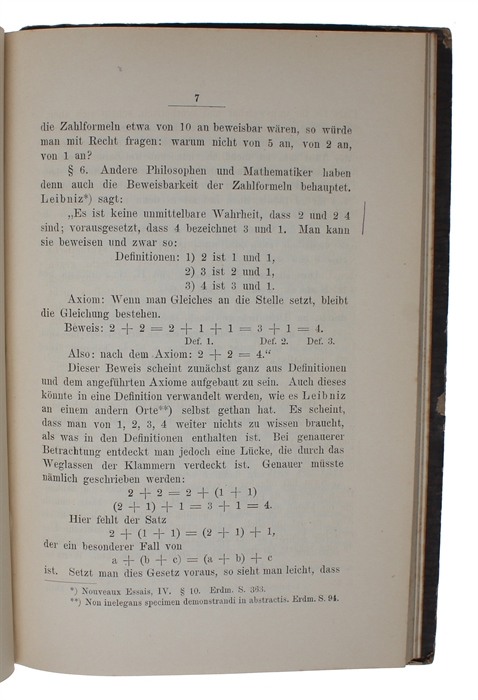 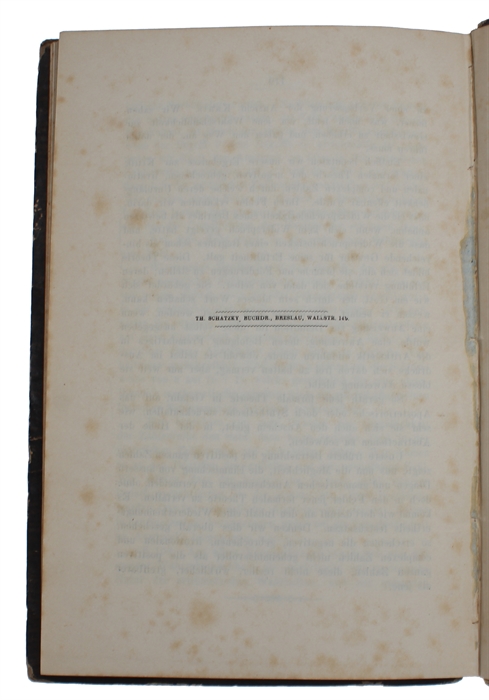 8vo. Contemporary paper boards. Paper labels over spine. Extremities worn, but tight and fine. A stamp to end-paper and to verso of title-page. Title-page and end-papers with light brownspotting, and some leaves with marginal markings, otherwise very nice and clean. Inscribed to front free end-paper. (10), XI, (1), 119, (1) pp.

The rare first edition with a handwritten presentation-inscription from Frege ("Freundschaftlichst/ überreicht vom/ Verfasser.") of this pioneering work of modern logic, which constitutes the starting point of analytic philosophy, of the philosophy of mathematics, and of logicism. This cornerstone of modern logic was pivotal to the development of the two main disciplines: the foundation of mathematics and the foundation of philosophy, and with it, Frege founded the discipline of logicism. The work profoundly influenced Russell and Wittgenstein, who both used Frege's "The Foundations of Arithmetic" as a steppingstone for their own work (e.g. In the preface of the "Principia Mathematica" Russell and Whitehead state that "In all questions of logical analysis our chief debt is to Frege" (p. VIII).).

Frege presentation-copies are of the utmost scarcity and hardly ever enter the market.

"The Foundations of Arithmetic" arguably constitutes Frege's main work, as it is here that he expounds the central notions of his philosophy while severely and effectively criticizing his predecessors and contemporaries. It is here that he deals with the actual goal of all his thought, namely TO BUILD MATHEMATICS AS AN EXTENSION OF LOGIC. The book represents the first philosophically sound discussion of the concept of number in Western civilization, and it profoundly influenced developments in the philosophy of mathematics and in general ontology.

Beginning thus: "When we ask someone what the number one is, or what the symbol "I" means, we get as a rule the answer "Why, a thing". And if we go on to point out that the proposition "the number is a thing" is not a definition, because it has the definite article on one side and the indefinite on the other, or that it only assigns the number one to the class of things, without stating which thing it is, then we shall very likely be invited to select something for ourselves - anything we please - to call one."... ("F.o.A" Introduction), Frege goes on to argue that number is something connected with an assertion concerning a concept - and essential for the notion of number is that of equality of a number. The definition that he settled upon, and which became of fundamental importance to the development of modern logic and the foundations of philosophy and mathematics was "The number which belongs to the concept "F" is the extension of the concept of being equal to the concept "F"."; here, equality of concepts is understood as the existence of a one-to-one correspondence between their extensions.

""Foundations of Arithmetic" (1884) provided an impressive definition of number in logical terms, after having criticized several empiricist, formalist and psychologistic approaches to mathematics. The definition was constructed in terms of properties of concepts rather than through classes. Thus, the number of a class was introduced as the number which applies to a given concept, and this last as the extension of the concept "equinumerous with the given concept", which can be defined in terms of bijective correspondence between sets." (Grattan-Guinness I: p. 621).

"The name of Frege has become one of the most honoured in the history of mathematics. The central feature of the book is the development of the definition of number. There can be no doubt about the greatness of this work" (W.H. McCrea - review of the English translation).

"Its epochal character in the attempt to put mathematical concepts on a rigorously logical basis has been realized in this country from the beginning of this century, thanks to the writings of Russell and Whitehead." (The Times Literary Supplement - review of the English translation).

"The modern philosophy of mathematics is characterized by the fact that various schools have been formed to overcome the difficulties occasioned by the antinomies. The oldest of these schools is LOGICISM and goes back to FREGE, one of the most significant logicians of all times." (Stegmüller, p. 326).