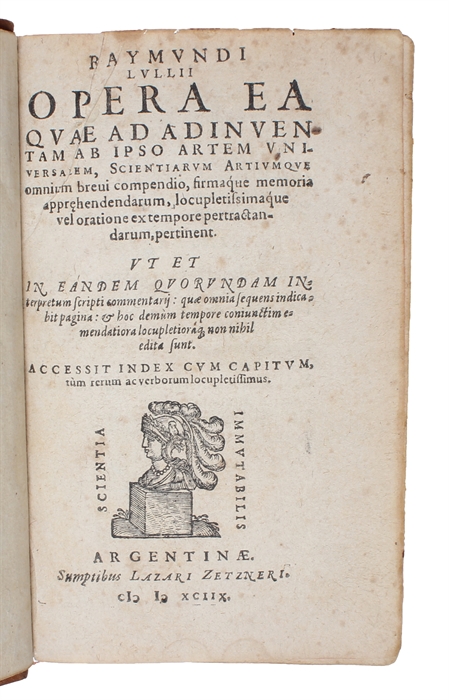 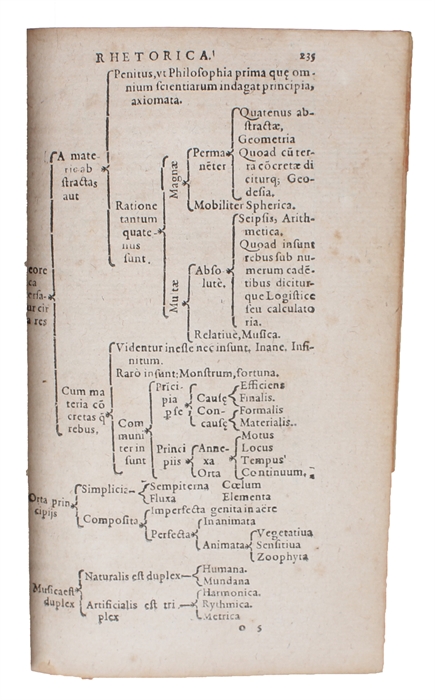 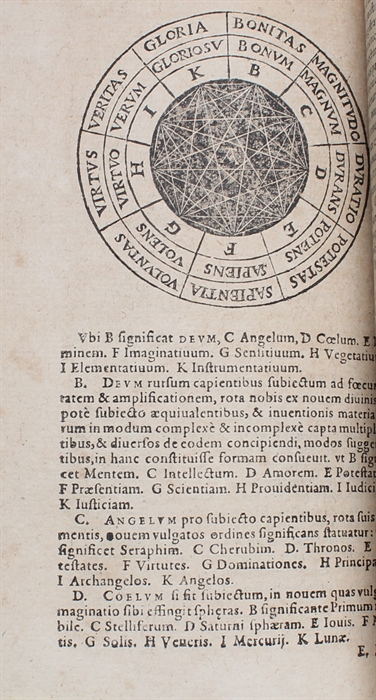 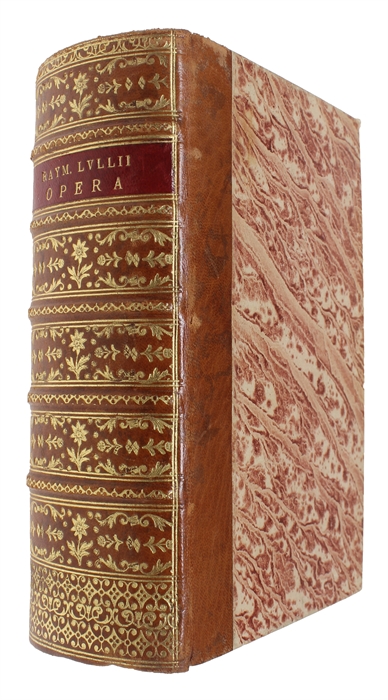 Scarce first edition of this seminal publication, which is practically solely responsible for the spreading of both Lullism and Bruno's mnemonic theories in the 17th century. This publication constitutes the standard work on Lull for more than a century and it directly influenced the most significant thinkers of the following century, e.g. Leibnitz, whose dream of a universal algebra was stimulated by the reading of Lull (and Bruno) in the present publication.

"In 1598, while the philosopher from Nola (i.e. Bruno) was in prison in Rome, Johann Heinrich Alsted together with the printer Lazarus Zetzner in Strasburg, published a great collection of the works by Raymond Lull and the most significant commentaries on Lullism, among them also some treatises by Bruno. Since then, Bruno's mnemonics was a basic component of all attempts made in the seventeenth century to set up a universal science on the basis of a theory of combinations interpreted in terms of Neo-Platonism... It was also Leibniz who was one of the first to assume similarities between Bruno's theory of the infinite and the Cartesian theory of vortices in an undetermined and infinite universe; Leibniz had had the opportunity to read these treatises in his capacity as librarian of the Herzog August Library in Wolfenbüttel". (Blum, p. 110).

"From another of Pierce's Lists we know that he possessed an important collection of Lullian and Lullist texts, namely the Renaissance edition by the famous Strasbourg editor Lazarus Zetzner: "Raymundi Lulli Opera ea quae ad adinventam ab ipso Artem universalem... pertinent" (printed first in 1598, then 1609, 1617 and, by his heirs, in 1651).
This edition, which was very influential - the young Leibniz, for instance, acquainted himself with Llull through this anthology-, contains several works by Llull himself as well as those Renaissance commentaries on his works by Agrippa of Netteshein, Giordano Bruno..." (Fidora, p. 181).

This highly influential publication of Lull's "Opera" through which Leibniz and many of his contemporaries got acquainted with Lull and Bruno, contains seven genuine works by Lull (including the two most important works of the last period of the Art, the "Ars brevis" and the "Ars magna"), four works falsely attributed to Lull, Agrippa's "In Artem Brevem" - and Bruno's four highly important commentaries on Lull, being the "De Lulliano specierum scrutinio" (pp. 685-97), "De Lampade combinatoria Lulliana" (pp. 698-755), "De Progressu Logicae venationis" (pp. 756-62) and "De Lampade venatoria logicurum" (pp. 763-806), which constitute Bruno's most important logical treatises and his seminal writings on mnemonics. The four treatises originally appeared separately in 1587 and 1588 respectively, and all appear here for the second time (apart from the "De progressu", which also appeared together with the first printing of the "De Lampade venatoria logicorum" the following year and here thus appears for the third time). The first printings of these works are of impossible scarcity and hardly obtainable. These four groundbreaking works appear together for the first time in the present publication and it is through this second printing of them that 17th century thinkers such as Leibniz got acquainted with them.

Raymond Lull (ca. 1232-1315) was one of the most important and influential philosophers and logicians of his time. He is considered a pioneer of several fields of science, now most notably computation theory. His works sparked Leibniz' interest in the field and drove him to his seminal invention. Lull invented an "art of finding truth" (often in Lullism referred to as "The Art"), which centuries later, when read in the present publication, stimulated Leibnitz' dream of a universal algebra. Lull applied this art to basically all subjects studied at the Medieval Universities. "Lull's metaphysics worked a revolution in the history of philosophy" (The Cambridge History of Renaissance Philosophy, p. 548).

Giordano Bruno (1548-1600) is one of the most significant thinkers of modern times. He prepared the way for the rise of modern philosophy and became a forerunner of modern philosophy and science. His logical commentaries and mnemonic treatises were of special importance to the emerging logic of the 17th century and it is his version of Lullism that comes to dominate this significant strand of thought for more than a century. Having been arrested in 1592 due to alleged heresy, Bruno was subjected to a 6 year long trial that finally condemned him to hanging in 1600, two years after the publication of the four works that came to secure his influence over the following century. "Bruno burned for philosophy; he was killed for moral, physical, and metaphysical views that terrified and angered authorities." (Copenhaver & Schmitt, p. 315).

"By far the greatest figure of this generation was Giordano Bruno (1548-1600), whose interest in Llull dates almost exclusively from his sojurns in France and Germany. His activities in this field, which he combined with his other aspects of Reniassance philosophy, are too complex to be treated in any detail here. Suffice it to say with Frances Yates that "the three strands of the Hermetism, the mnemonics, the Lullism are all interwoven in Bruno's complex personality, mind and mission"...
"Perhaps the most important event of Lulliasm of this period was not the appearance of any new figure or work but the publication of an anthology by Lazarus Zetzner of Strasburg, entitled "Raymundi Lullii, opera ea quae ad adinventam ab ipso Artem universalem", which, for the next century or so, was to become the standard work on Llull. It is therefore instructive in understanding seventeenth-century Lullism... The first edition of this anthology appeared in Strasburg in 1598. It was reprinted in 1609... reprinted in 1617 and again in 1651... This mixture of Llull, pseudo-Llull, and Renaissance commentaries, emphasizing a general art of discourse, constituted the "package" in which Llull was presented to seventeenth-century readers, including Leibniz (note 33: it was apparently the first edition of 1598 that Leibniz read), and it must be kept in mind when discussing their version of Llull." (Bonner, pp. 67-68).

Bruno's works, the first editions of which are all of the utmost scarcity, were generally not reprinted in Bruno's lifetime and new editions of them did not begin appearing until the 19th century. For three centuries his works had been hidden away in libraries, where only few people had access to them. One very significant exception is the four treatises that we find in the present publication. They are among the only of Bruno's treatises to be published again before the 19th century, and as they don't appear again on their own, but here, in THE most important publication of Lull's writings for more than a century, it is through this second printing of these four works that Bruno comes to have his primary influence upon 17th century philosophy and science. His separate publications were simply not accessible to thinkers like Leibniz and could thus not be studied. Also therefore, Zetzners' 1598 publication of Lull and Bruno together proved to be of seminal importance, not only to the spreading of Lullism, but just as much to the spreading of Bruno's even more important theories.

"Raymond Lull (ab. 1232 - 1315), Majorcan writer, philosopher, memorycian (he was later to become a great source of inspiration for Giordano Bruno), logician, and a Franciscan tertiary. He wrote the first major work of Catalan literature. Recently-surfaced manuscripts show him to have anticipated by several centuries prominent work on elections theory. He is sometimes considered a pioneer of computation theory, especially given his influence on Gottfried Leibniz. He is also well known also as a glossator of Roman Law.
Lull taught himself Arabic with the help from a slave. As a result, he wrote his "Ars Magna", which was intended to show the necessary reasons for the Christian faith. To promote his theory and test its effectiveness, he went to Algiers and Tunis.
At the age of 82, in 1314, Lull traveled again to North Africa, where an angry crowd of Muslims stoned him in the city of Bougie. Genoese merchants took him back to Mallorca, where he died at home in Palma the following year.". (Thorndyke)

Giordano Bruno was born in Nola in Southern Italy in 1548, and entered the Dominican order in Naples at the age of 18. While pursuing theological studies, he also thoroughly studied the ancient philosophers and began doubting some of the teachings of the Catholic Church. When he was in Rome in 1576, these doubts became known to the authorities of his order, and an indictment for heresy was prepared against him. Before he could be arrested, he escaped and began a long journey which took him to many European countries, among these England, where his most important works are published, until in 1592 he was denounced to the Inquisition and arrested. In 1593 he was taken to Rome, imprisoned, and subjected to a 6 year long trial. He firmly refused to recant his philosophical opinions, and in 1600 he was condemned for heresy, sentenced to death, and burned alive.