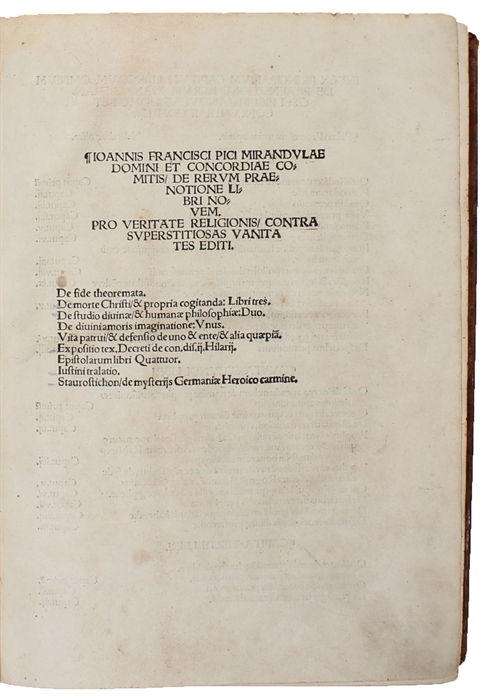 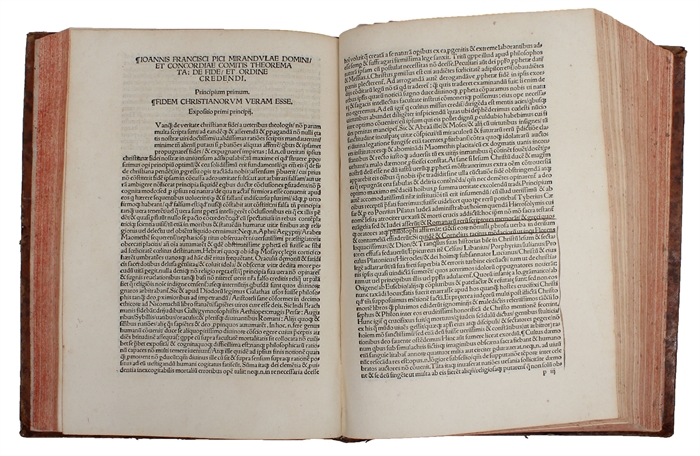 A MONUMENT OF RENAISSANCE SCEPTICISM

Scarce first edition of Giovanni Francesco Pico's seminal "Opera", issued by Pico himself, in which some of his most important works appear for the first time, e.g. "De Rerum Praenotatione", "De fide ordine" and the "Staurostichon" as well as his translation of Justin the Martyr's "Admonitio", here bound with the highly important second edition of the "Hymni heroici tres". The present publication occupies a central place in the development of Renaissance thought. Through the "Opera" of Pico, skepticism came to play a dominant role in the development of early modern thought. "Telesio, Bruno, Galileo, and others also employed the same arguments which Pico had brought to the consciousness of Renaissance Europe. Gianfrancesco Pico's skeptical techniques did not die with him, but lived on to produce a tangible, recognizable influence on the intellectual ambience of early modern Europe." (Schmitt, p. 7).

This seminal "Opera", published 13 years before the publication of Pico's magnum opus ("Examen Vanitatis") and 26 years before his death, is of the utmost importance to the development of Pico's thought and to the development of Renaissance thought in general - "a study on the philosophy of Gianfrancesco Pico della Mirandola would furnish an important addition to our knowledge of the philosophy of the Italian Renaissance" (Schmitt, p. (VII)). The many important works in the present publication are known under the joint title "Opera aurea & bracteata" or "Liber imaginationis". The publication is made up of 9 parts, all of which were also intended for separate sale (and which all have separate paginations). The works included are: "De rerum praenotatione etc.", "De fide et ordine credenda", "De morte Christi & propria cogitanda libri tres", "De studio divinae & humanae philosophiae, libri duo", "De imaginatione", "Vita Io. Pici patrui. Eiusdem de uno & ente/ defensio & alia quaepiam", "Epistolarum libri quattuor ", the translation of Justini's " Admonitio " - together with "Saurostichon/de mysterijs Germaniae Heroico carmine" and "Expositio tex. decreti de con. dis.ii. Hilarii", and then follows " Ad lectorum " - 6 of the works here are FIRST PRINTINGS.

This magnificent collection of works by "the first modern sceptic" and "the only serious student of Sextus before the middle of the sixteenth century" (Copenhaver & Schmitt) constitutes a milestone in Renaissance thought. The seminal work "De rerum praenotatione", which appears here for the first time, is among the most important that Pico wrote. It constitutes a fierce attack upon superstition, and a defense of the true religious truths - theories that underpin ALL of his later thought and are of fundamental importance to his later works, including the "Examen".

"This is a lengthy work (second in length only to the "Examen Vanitatis" among Pico's works) against pretended modes of prophesy. It is of the same genre as Giovanni Pico's work against astrology and is dedicated to the author's cousin and protector, Alberto Pio. It was first printed in the "opera" of 1506-07… There is no substantial portion of the work extant in manuscript." (Schmitt, p. 192).

The "de fide et ordine", which also appears here for the first time, is likewise one of Pico's significant works, although not as philosophical as the previous work. "This is a work of medium length, principally theological, but of some philosophical importance. It was dedicated to Pope Julius II in the first printed edition of 1506-07" (Schmitt, pp. 193-94).

The "Staurostichon" is Pico's most famous poem, dedicated to Emperor Maximilian. In spite of the few pages it takes up, it has been the subject of much debate and interpretation throughout the centuries. Apparently "[t]he extant manuscript seems to have been made after the first printed edition [i.e. the present]." (Schmitt, p. 196).

Pico's translation of the "Admonitio" (which is no longer attributed to Justin the Martyr) is of great importance. "The first printing of the translation, which is dedicated to Zanobi Acciaiuoli, was in the "opera" of 1506-07. It was often reprinted, remaining a standard translation for most of the sixteenth century." (Schmitt, p. 200).

The four books of Pico's letters are also printed here for the first time. "In the three editions of the "Opera" are printed four books of letters. These were prepared for the edition of 1506-07 and were reprinted with few additions in the later editions. Consequently, it seems that the bulk of Pico's personal letters written after 1505 have not come down to us." (Schmitt, p. 200).

Giovanni Francesco [Gianfranceso] Pico della Mirandola (1470-1533), not to be confused with his uncle Giovanni Pico della Mirandola (1463-1494) was a highly important Renaissance thinker and philosopher, who was strongly influenced by the Neoplatonic tradition, but even more so by the preaching of Girolamo Savonarola, whose thought he defended throughout his life.

Just like his uncle, Gianfrancesco Pico devoted his life to philosophy, but being a follower of Savonarola and having a Christian mission, he made it subject to the Bible. He even depreciated the authority of the philosophers, above all of Aristotle.

"At the very beginning of the 16th century, Gian Francesco Pico, the nephew of Pico della Mirandola, had predicted the final failure of all attempts at reconciliation of the different philosophical movements. Gian Francesco Pico was a thinker of very considerable stature and a follower of Savonarola. There was a touch of tragedy about his personality. For his life was suspended, as it were, between the scaffold of Savonarola and incessant family feuds - in the course of one of which he was finally killed. No wonder that he borrowed from the scepticism of Sextus Empiricus in order to destroy philosophy to make more room for religion." (Garin, p. 133).

Gianfr. Pico, a learned scholar and apt reader of classical texts, was the first Renaissance thinker that we know to have seriously studied and used the works of Sextus Empiricus, which were not printed until the 1560'ies, causing a revolution in Renaissance thinking. "The printing of Sextus in the 1560s opened a new era in the history of scepticism, which had begun in the late fourth century BCE with the teachings of Pyrrho of Elis. [...] Before the Estienne and Hervet editions, Sextus seems to have had only two serious students, Gianfrancesco Pico at the turn of the century and Francesco Robortello about fifty years later." (Copenhaver & Schmitt, pp. 240-41).

"No significant use of Pyrrhonian ideas prior to the printing of Sextus' "Hypotyposes" has turned up, except for that of Gianfrancesco Pico della Mirandola [...] His writings may seem isolated from the main development of modern skepticism that began with the publication of the Latin translations and modernized formulation of ancient scepticism offered by Michel de Montaigne. However, they represent a most curious use of skepticism that reappears in the early seventeenth century with Joseph Mede and John Dury and the followers of Jacob Boehme and in the early eighteenth century in the writings of the Chevalier Ramsay, the first patron of David Hume, to fortify or justify prophetic knowledge." (Popkin, p. 20).

Gianfr. Pico develops his sceptical arguments to their fullest extent in his "Examen" (1520), which is considered his main work. However, the foundation of all these ideas are laid in his earlier works, all the significant of which are present here, in his seminal "Opera"-collection. Together, they constitute the earliest printed testimonies to the use of scepticism and a premonition of the role that scepticism came to play in Renaissance thought, primarily after the first printings of Sextus in the 1560'ies.

"The revival of ancient philosophy was particularly dramatic in the case of scepticism. This critical and anti-dogmatic way of thinking was quite important in Antiquity, but in the Middle Ages its influence faded [...] when the works of Sextus and Diogenes were recovered and read alongside texts as familiar as Cicero's "Academia", a new energy stirred in philosophy; by Montaigne's time, scepticism was powerful enough to become a major force in the Renaissance heritage prepared for Descartes and his successors." (Copenhaver & Schmitt, pp. 17-18).

"Throughout the early modern period, from Ficino and Pico to Newton and Leibniz, such convictions supported a pattern of historiography that could never have emerged without the humanists, even though it did not preserve their fame for modern times. Other myths of classicism and Christianity outlived the fable of ancient theology because they conflicted less flagrantly with the findings of history
The purpose of the ancient theology was to sanctify learning by connecting it with a still more ancient source of gentile wisdom that reinforces sacred revelation. Rather than baptize the heathens as Ficino or the older Pico wished, some early modern critics damned them, and one of the most aggressive thinkers of this school was the younger Pico. He saw an impassable gulf between Christian and pagan belief where his uncle had tried to build bridges." (Copenhaver & Schmitt, p. 337).