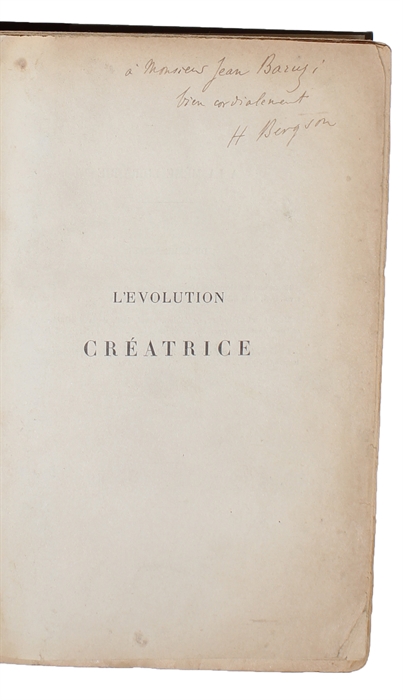 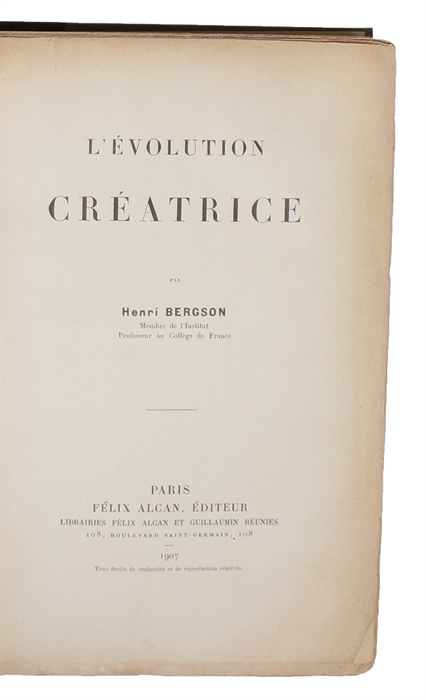 Rare first edition, presentation-copy for Jean Baruzi, of Bergson's seminal main work, the "Creative Evolution", his most famous and influential book, which constitutes the great philosopher's cult-like showdown with Darwinian mechanism, which resulted in a theory of cosmic evolution that covered everything from biology and other sciences to metaphysics and religion.

Jean Baruzi (1881-1953), an important French philosopher and historian of religion, specialized in Leibnitz and William James, was a student of Bergson. He was the author of a controversial dissertation, "St. John of the Cross and the Problem of Mystical Experience", which gave an existential-phenomenological description of religious andguish and the "lived experience" of the mystic. He was a professor at the Collège de Frace and held the Histoy of Religion chair after Alfred Loisy.

In 1907, when Henri Bergson's third book, "Creative Evolution", was published, the seminal French philosopher, who had studied both mathematics and philosophy, possessed the professor chair of modern philosophy at the Collège de France. Though the book was the result of several years of extremely thorough research, Bergson himself could have hardly foreseen the effect that this book was going to have throughout the 19th century with an amazing revival in the 20th century, making him one of the most important philosophers of his time.

Always committed to the reality of time as the basis and as a source of creative change, Bergson, in his magnum opus, sets out to free the sciences of psychology and biology from the materialism and mechanism that had dominated them in the late nineteenth century and due to which they had been made unable to explain creativity, growth and change. He makes an amazing new contribution to the theory of knowledge by providing an account of creative evolution and the creative mind, thereby freeing psychology and biology from a number of problems otherwise unsolvable through philosophical and scientific explanations. Bergson accepts the historical facts of evolution but rejects all the mechanistic and materialistic explanations of the evolutionary process. Like Darwin, he accepts natural selection as an explanation of extinction, but he does not accept it as an explanation of evolutionary change, and likewise with Lamarck, Spencer, and the orthogenesists, he accepts the foundational theories of evolution but only to the point at which mechanism or materialism sets in, instead of which, he basically explains further change and growth with a basic vital principle that accounts for creative changes.

As such, "Creative Evolution" sets out to found a philosophy that can account for the continuity of all living things, for both the creation of life and the diversity that results from creation, and Bergson does this with his idea of an original vital principle, a governing immaterial force of life, a sort of natural creative impulse, that embraces the whole of life in one.

The book was hugely popular when it appeared, and its immediate immense influence lasted a couple of decades, making Bergson an internationally acknowledged cult-like hero of a French intellectual. After the Second World War, though, the interest in Bergson decreased, only to be reawakened in the late 1960'ies where a growing interest in his works re-emerged, making him to this day one of the most read philosophers of the early 20th century. There can be no doubt as to the continued influence of his works.