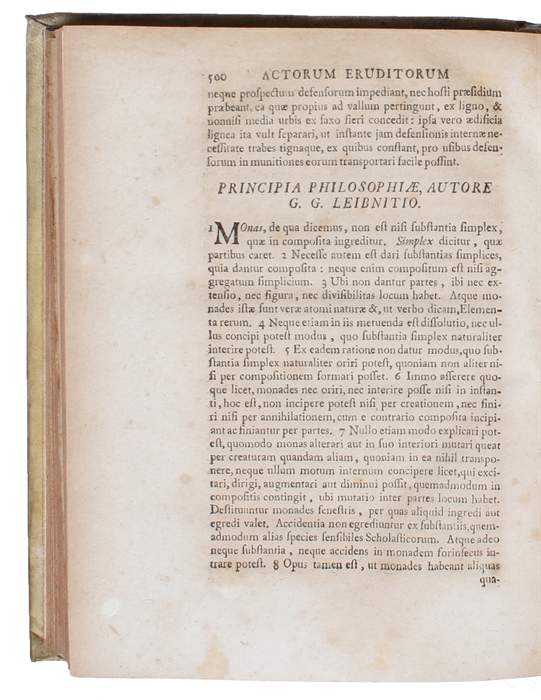 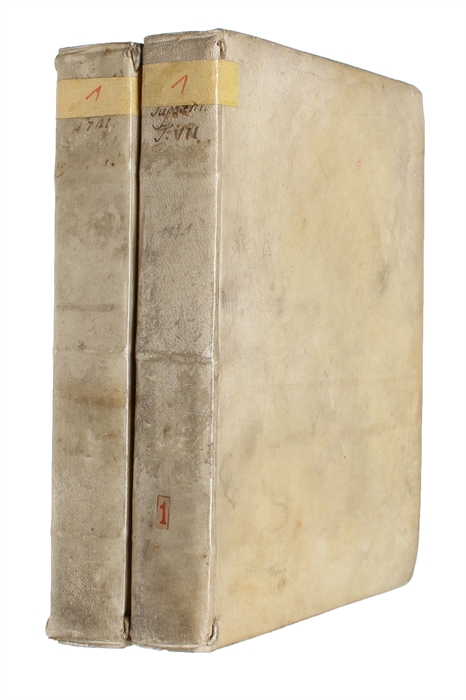 THE MONADOLOGY - A NEW PHILOSOPHY

4to. Both entire volumes (Acta Eruditorum 1721 + Supplementa VII, 1721) present, in uniform contemporary full vellum bindings with handwriting to spines. A small later label to top of spines. Old handwritten ex libris-inscription to top of both title-pages as well as a small stamp. The supplement-volume with an additional stamp to title-page, and both volumes with library label (Archiv des k.k. militär.-geograf Institutes) to pasted down front free end-paper. As usual some brownspotting. A nice set. pp. 500-514 (Supplement-vol.) + pp. 94-95. [Entire volumes: (2), 537, (39) pp. + three plates (Suppl.-vol.) + (4), 547, (42) pp. + five plates].

The highly important first Latin translation of Leibnitz' seminal "The Monadology" - his main philosophical work and the work that stands as the epitomization of anti-materialism - which was not published in the original French until 1814, and which only appeared in a German translation (exceedingly scarce) in 1720 and in a Latin translation, by Christian Wolff, in 1721, as it is here. Up until then, Leibnitz' key philosophical text had only circulated in manuscript form (written in 1714). - Here sold together with Wolff's anonymously written review of (the German version of the) "Monadology", which had great impact upon the reception of the seminal philosophical text that is the "Monadology".

"Until the XXth century, criticism about Leibniz's "Principles of Nature and Grace" and "Monadology" has been characterised by a number of mistakes and misunderstandings, which have roots in the circumstances surrounding the genesis of these manuscripts. As a consequence, erroneous information about these texts was included in an anonymous review, published in 1721 in the "Acta eruditorum" of Leipzig. Research on primary sources proves that the author of this review (who was in fact the author of the latin translation of the Monadology, published immediately afterwards) was Christian Wolff, who was in possession of a copy of Leibniz's manuscript as early as 1717. Wolff's initiative of translating the Monadology can be seen as part of a cultural strategy aiming to prevent any idealistic interpretation of Leibniz's monadological thought. From this point of view, to consider the theory of pre-established harmony as based on a system of strictly dualistic metaphysics was an essential element of Wolff's philosophical strategy."(Antonio Lamarra: Contexte génétique et première reception de la "Monadologie". Leibniz, Wolff et la doctrine de l'harmonie préétablie").

During his last stay in Vienna from 1712 to September 1714, Leibniz wrote two short texts, which were meant as concise expositions of his philosophy, namely the "Principes de la Nature et de la Grace fondés en raison" (written as a letter to Prince Eugene of Savoy) and the work we now know as the "Monadology" (which he had been asked to write by Nicolas Redmond, Duke of Orleons) - the latter being the work that established Leibnitz' fame as a philosopher and which has gone down in history as, not only as one of the most important philosophical texts of the 18th century, but also, arguably the most important work of immaterialism.

After his death "Principes de la Nature et de la Grace fondés en raison" appeared in French in the Netherlands. Without having seen this publication, Christian Wolff and collaborators had assumed that it contained the French original of the "Monadology" as well, although this in fact remained unpublished until 1840. Thus it happened that Leibnitz' key philosophical text, which came to be known as "The Monadology", was printed in German and Latin ab. 120 years before it appeared in the original French.

The German translation appeared in 1720 as "Lehrsätze über die Monadologie" and the following year the Latin translation appeared, in Acta Eruditorum, as "Principia philosophiae". Three manuscript versions of the text exist: the first written by Leibniz and overcharged with corrections and two further emended copies with some corrections appearing in one but not the other.

"Leibniz was one of the last "universal men" of the type which the Italian Renaissance had ideally postulated: philosopher, historian, mathematician, scientist, lawyer, librarian, and diplomat. In all these fields either all his actual achievements or his seminal suggestions have become part and parcel of European thought.
Although trained for the law, mathematics was his favourite subject. Independently of Newton he worked out the infinitesimal calculus, introduced a number of mathematical symbols now in general use, and constructed an early calculating machine, the ancestor of our computers.
Mathematical conceptions also determine his philosophy. In it, Leibniz tried to combine physics and metaphysics and to reconcile philosophy and theology. The "essay on a Theodicy" is the only larger philosophical work published by himself; but his fame as a philosopher rests on his "Theory of Monads". The original French text of this was published for the first time in 1840; but it had circulated in manuscript in its initial form of a letter addressed to Prince Eugene of Savoy (1714) and it was printed in German (1720) and Latin (1721) translations. Leibniz proclaimed a "pre-established harmony" of the universe which he explained as composed of hierarchically ordered "monads", i.e. the ultimate substances of mind as well as matter. This concept clearly reflects the ideal of the properly organized absolutist state of the baroque period and derives partly from the "idées simples" of Descartes whom Leibniz greatly admired. A generation later, Voltaire ridiculed the "pre-established harmony" in "Candide"; but modern nuclear science has vindicated Leibniz's basic ideas, albeit from different presuppositions." (Printing and the Mind of Man, pp. 105-6).

The "Monadology" is an extremely condense work that consists of 90 (in this Latin version, 93) numbered sections/paragraphs, which outline a metaphysics of a single substance. The Monadology ends the dualistic mind-body-problem of Descartes and offers a new solution to the question of the interaction between mind and matter, by explaining the pre-established harmony and the synchronous (not causal) relationship between the realm of final causes and that of efficient causes.
Leibniz' groundbreaking work came to profoundly influence not only 18th century thought, but also much later philosophy and logic. For this we have to thank Christian Wolff, the translator of the "Monadology" into Latin and the first reviewer of the work. It is through Wolff and his elaboration of the development of Leibniz' speculative and metaphysical views that Leibniz becomes a recognized figure of importance, particularly in Germany from the 1720'ies onwards, where Wolff's writings were standardly studied.
"Notably, Wolff's Leibnizianism made a deep impact on Kant, in whose "Critique of Pure Reason" (1781) Leibniz himself came to figure as one of the main targets of Kant's anti-metaphysical programme. In particular, Kant saw Leibniz as pretending to "a priori" knowledge of the world as it is in itself and presented his own claim that the only knowledge we can have is of the world as it appears in our experience as sharply opposed to the Leibnizian vision. [...] today shows that his thought has survived even the extreme empiricism of the Vienna Circle in the 1930s, which would have viewed its principal doctrines as unverifiable and hence utterly meaningless. Although not in evidence in the "Monadology" itself, one of Leibniz' preoccupations was with the philosophy of logic and language, and the twentieth-century's concern for those topics has discovered in what he had to say about them a treasure house of good sense and wisdom which can be detached from the less appealing of his metaphysical speculations. Then, more recent writers who have been interested in the metaphysics of possibility and necessity have found inspiration in the Leibnizian image of possible worlds, and that too has helped keep his name alive for us." (Savile, "Leibniz and the Monadology", pp. 6-7).

"The long span of Leibniz' intellectual life and his early involvement with philosophy made for engagement with a wide variety of philosophical traditions and issues. Early studies at home exposed him to the thought of the Scholastics; during his university years he was something of a materialist, influenced by the atomism of Bacon and Gassendi. In his mid-20s and early 30s, becoming disenchanted with the intellectual prospects for materialist thought, he turned towards the sort of immaterialism that came to shape his mature thinking after the decade between 1675 and 1685 when he was more narrowly concerned with mathematics than philosophy. It is this anti-materialism that is epitomized in the "Monadology" itself...
Although Leibniz produced a prodigious quantity of philosophical writing very little of it was published in his lifetime; indeed, very little was intended for publication. For the most part..., his philosophical thoughts were prepared for individual scholars he had met, or with whom he corresponded, and were never presented as a worked-out system... it was not until the last period of his life that he found the time and the impetus to set down the whole, which he did in two condensed papers written in French during a visit to Vienna.The more popular and less taxing of these was the "Principles of Nature and Grace Founded on Reason", which he prepared for Prince Eugène of Savoy, and the second, which he had been asked to write by the councellor of the Duke of Orleans, Nicolas Remond, but never sent off, was the "Principles of Philosophy" or, as he called it "Elucidation Concerning Monads" ... The title by which that work is known today, "Monadology", was not one that Leibniz ever gave it, but was invented by the work's first editor, Henrich Kohler, who published it in a German translation under that title in 1720." (Savile, "Leibniz and the Monadology", pp. 3-4).

"Gottfried Wilhelm Leibniz (1646-1716) was one of the great thinkers of the seventeenth and eighteenth centuries and is known as the last "universal genius". He made deep and important contributions to the fields of metaphysics, epistemology, logic, philosophy of religion, as well as mathematics, physics, geology, jurisprudence, and history. Even the eighteenth-century French atheist and materialist Denis Diderot, whose views were very often at odds with those of Leibniz, could not help being awed by his achievement, writing in his entry on Leibniz in the Encyclopedia, "Perhaps never has a man read as much, studied as much, meditated more, and written more than Leibniz... What he has composed on the world, God, nature, and the soul is of the most sublime eloquence. If his ideas had been expressed with the flair of Plato, the philosopher of Leipzig would cede nothing to the philosopher of Athens." ("Oeuvres complètes", vol. 7, p. 709) Indeed, Diderot was almost moved to despair in this piece: "When one compares the talents one has with those of a Leibniz, one is tempted to throw away one's books and go die quietly in the dark of some forgotten corner." ("Oeuvres complètes", vol. 7, p. 678) More than a century later, Gottlob Frege, who fortunately did not cast his books away in despair, expressed similar admiration, declaring that "in his writings, Leibniz threw out such a profusion of seeds of ideas that in this respect he is virtually in a class of his own." ("Boole's logical Calculus and the Concept-script" in "Posthumous Writings", p. 9)." (SEP).