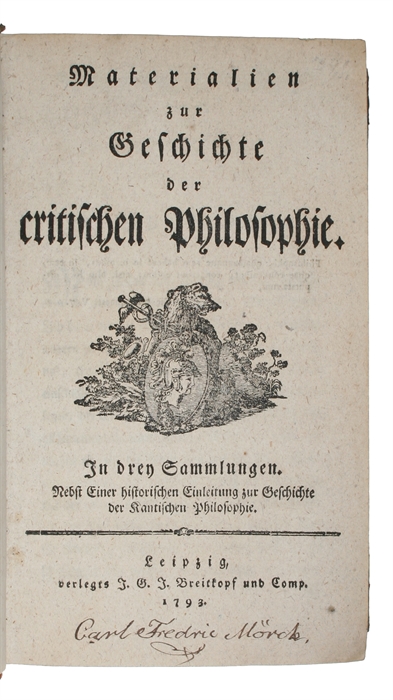 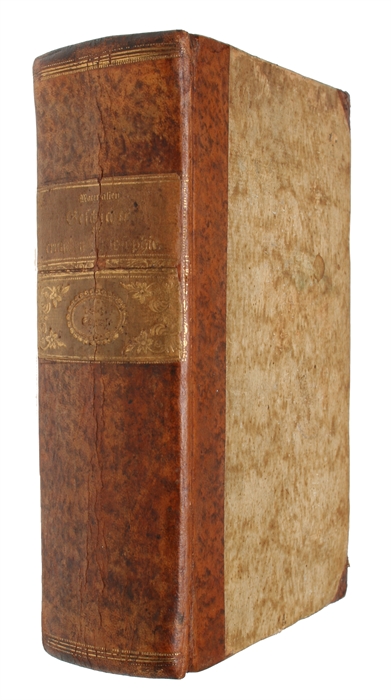 THE FATE OF REASON

Extremely scarce first edition of Hausius' classic on the critical philosophy of Kant, which constitutes the first collection of materials pertaining to the reception of Kant's philosophy, a work of utmost importance to Kant scholarship and to establishing the entire Critical tradition. The work, which appeared in the same year as Kant's third and final Critique, constitutes an invaluable source for anyone interested in the early development of critical philosophy, "a work which is as valuable as it is rare." (Adickes).

"The Critique of Pure Reason by Immanuel Kant (1724-1804) is without question one of the landmarks of the entire history of Western philosophy, comparable in its importance and influence to only a handful of other works such as Plato's Republic, Aristotle's organon of logical works, and Descartes's Meditations on First Philosophy. The Critique was first published in 1781, after a decade of intensive preparation,1 and within a few years became the center of attention in German philosophy,
and shortly after that in other European countries with advanced philosophical culture such as Britain and France as well.2 - 2: As early as 1793, Karl Gottlob Hausius was able to publish a three-part collection of Materialen zur Geschichte der critischen Philosophie
("Materials for the History of the Critical Philosophy") (Leipzig: Breitkopf, 1793)." (Poul Guyer, The Cambridge Companion to Kant's Critique of Pure Reason, p. 1).

" "Materialien zur Geschichte der Critischen Philosophie. In Drey Sammlungen. Nebst Einer historischen Einleitung zur Geschichte der Kantischen Philosphie. " A work which is as valuable as it is rare. After a preface of eight pages, and a table of contents, follows [pp. III - XCVI] a fairly complete bibliography of writings UPON Kant, up to 1793 inclusive [...], of 243 titles [no. 244 is given as an addendum, pp. CLXXI, CLXXIII]. The remarks appended to most af the works cited [some lines to two pages long] are, so far as I have examined them, and I have identified a majority, reviews or portions of reviews from the A.D.B. and the Th.A. The works are grouped in four classes: [1] those of speculative and [2] practical content; [3] those refrring to positive religion and [4] to the history of Kantian philosophy. [...] (Erich Adickes: Bibliography of Writings by and on Kant Which Have Appeared in Germany up to the end of 1887).

Only few copies are listed on OCLC, and only some of these have all three parts. It seems that four Americal Libraries own copies: Harvard (Houghton), Columbia, Cornell, and University of Southern California.