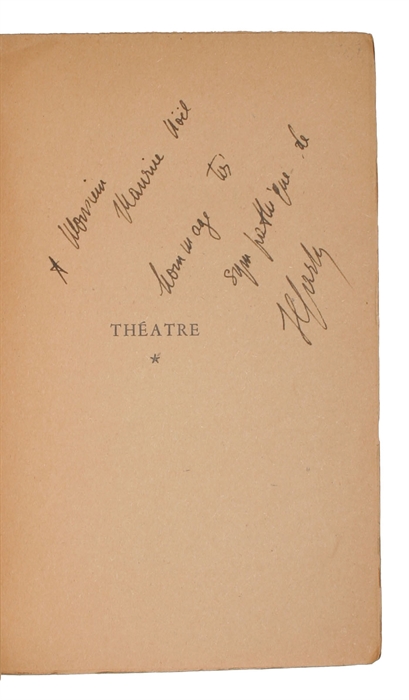 PRESENTATION COPY FOR THE LITERARY DIRECTOR OF FIGARO

First edition of one of Sartre's most important literary productions, with a signed presentation-inscription "A Monsieur/ Maurice Nöel/ homage toi/ sympathique de/ JPSartre"

Maurice Noël was an important person in literary circles at the time, and in fact the year 1947, when Sartre's "Theatre" was published, was of utmost importance to both Noël and French history of literature - it is the year that "Le Figaro Littéraire" is born, and Noël was its director.

The respected literary supplement to Figaro, "Le Figaro Littéraire", is the oldest literary supplement to the paper. In the beginning when Noël started it, it was an independent publication, but today it has been re-integrated into the Figaro, where it appears every Tuesday. From its beginning, "Le Figaro Littéraire" has been recognized as an important and respected publication, well known for its slandering of the purges and totalitarian Soviet regime.

At the time of Sartre, "Le Figaro Littéraire" was highly important politically, intellectually, and ideologically, and Sartre played a great role in the gathering intellectuals and writers to join and spread the political and literary message of "Le Figaro Littéraire", a main one being the literary freedom of authors suppressed by communist regimes. The journal did much to defend and help writers of socialist countries.