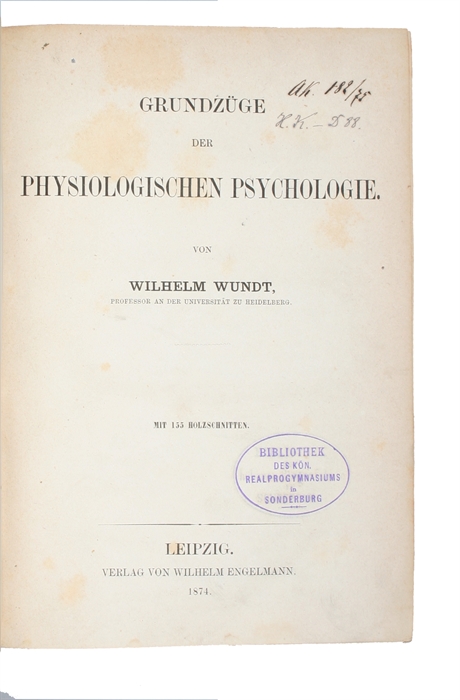 THE FOUNDING OF EXPERIMENTAL PSYCHOLOGY

Leipzig, Engelmann, 1874. Lex 8vo. Presumably original half cloth with gilt title and lines to spine. Upper capital with a little bit of wear, but otherwise this fairly fragile binding is in surprisingly fine condition. First few leaves with a little bit of light brownspotting, otherwise fine. Stamp to title-page (Bibliothek des Kön. Real progymnasiums in Sonderburg) and a few old handwritten numbers to top of title-page. A few leaves with light pencil-underlinings. Repaired tear to first leaf of the Introduction, no loss. Illustrated throughout. XII, 870, (2, -errata) pp.

The uncommon first edition of Wundt's seminal main work, which constitutes the most important work in the field of experimental psychology, of which Wundt was the founder. Wundt's "Physiological Psychology" constituted a new domain of science. Apart from being the first to create this new science and to lecture on it, he was also the first to publish a book on it, namely the "Grundzüge der physiologischen Psychologie", which remains the first and foremost classic within the field and is now regarded as the most important book in the history of psychology.

"Wundt made experimental investigations of normal individual reactions, reflex responses, and general behaviour, and interpreted them in terms of neural mechanisms. He is the founder of experimental psychology and his book remains the most important on the subject." (Garrison & Morton).

"Wilhelm Maximilian Wundt (1832-1920) is known to posterity as the "father of experimental psychology" and the founder of the first psychology laboratory (Boring, 1950: 317, 322, 344-5). From there, Wundt exerted enormous influence on the development of psychology as a discipline, especially in the United States. Somewhat reserved and shy in public, Wundt aggressively dominated his chosen arenas, the lecture hall and the pages of books, with a witty and sardonic persona.His scope was vast, his output incredible. His writings, totaling an estimated 53,000 pages, include: articles on animal and human physiology, poisons, vision, spiritualism, hypnotism, history, and politics; text- and handbooks of "medical physics" and human physiology; encyclopedic tomes on linguistics, logic, ethics, religion, a "system of philosophy;" not to mention his magna opera, the "Grundzüge der physiologischen Psychologie" and the "Völkerpsychologie" (in ten volumes)." (SEP).

Horblit: 100a
G&M: 4976 (presumably erroneusly stating the printing-year as 1873-74; all other bibliographical information merely states 1874, as all other copies that we have been able to locate. The preface, which is clearly written for the first appearance of the book, is dated March 1874).