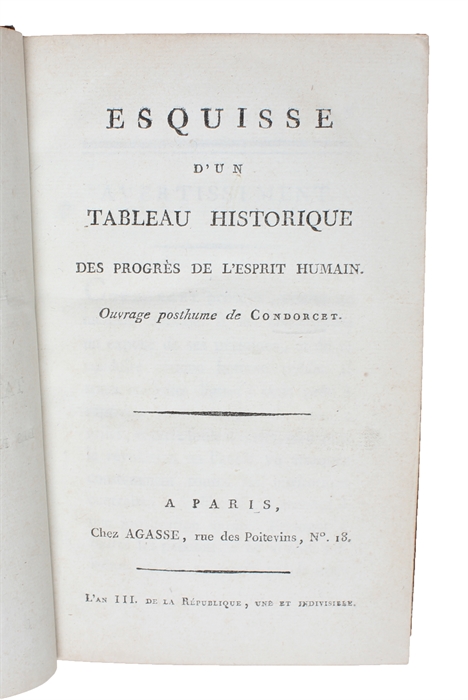 The rare first edition of Condorcet's main work, "the most fully developed exposition of the progress of man" (Printing and the Mind of Man, p. 149) and a main work of the Enlightenment as well as of historical thought in general. The author was the creator of what came to found the basis for the modern French system.

The great French philosopher, political thinker and mathematician, M.J.A. Condorcet (1743 - 1794), played a seminal role in 18th century France. He was friends with the likes of d'Alembert, Voltaire, Turgot etc., and he greatly contributed to the social and political debates of politically turbulent France. As one of the few, he advocated a liberal economy, equality in public education as well as in gender and race etc. He preached constitutionalism, and his thoughts that are still influential today embody those of the Enlightenment and rationalism.
"A belief in the ultimate perfectibility of man lies at the root of all progressive thinking about the human condition. The "philosophes" and Godwin had familiarized the reading public with this notion; it was left to Condorcet to give it its finest and most durable expression. It was the gospel of nineteenth century that mankind is destined for indefinite future progress. Condorcet, looking back and then forward, saw proof of this in the growing equality between classes and nations, the intellectual, physical and moral improvement of man; and he prophesied that popular education on correct principles would strengthen and assure this progress." (PMM 246).

During the French Revolution Condorcet came to play a dominating role, advocating a rationalist reconstruction of society, and he championed many liberal causes. In 1791 he became secretary of the Legislation Assembly, and the institution adopted his scheme for comprehensive state education, which later became the basis of the modern French system. In the struggle between the two political parties, the Girondists and the Montagnards, Condorcet occupied an independent role, but when he opposed the death penalty under the trial of King Louis XVI (still supporting the actual trial), and the radical Montagnards gained more power, Condorcet was branded a traitor, and in October 1793 a warrant was issued for his arrest. He now went into hiding for several months (almost a year), and it is during these months that he writes the work that was to become his most important, the main work "Esquisse..." ("Sketch for a Historical Picture of the Progress of the Human Mind"), which was published posthumously, the year after his death.
In 1794 Condorcet was arrested, and two days later he was found dead in his cell, -it is unknown whether he committed suicide or was murdered because of fear of fierce reactions that would definitely have occurred had the beloved man been officially sentenced to the death penalty.

"In the Esquisse", published after his death, Condorcet traces the history of man through epochs, the first three covering his progress from savagery to pastoral community and thence to the agricultural state. The next five span the growth of civilizations and knowledge down to Descartes, and the ninth describes the revolution of Condorcet's own lifetime, from Newton to Rousseau. The prophetic view of the tenth epoch shows Condorcet at his most original. He forecasts the destruction of inequality between nation and classes, and the improvement, intellectual, moral and physical, of human nature..., it exercised considerable influence on Comte. But it is as the most fully developed exposition of the progress of man that Condorcet's work is now remembered, and it is this which has given it its lasting appeal." (PMM 246).