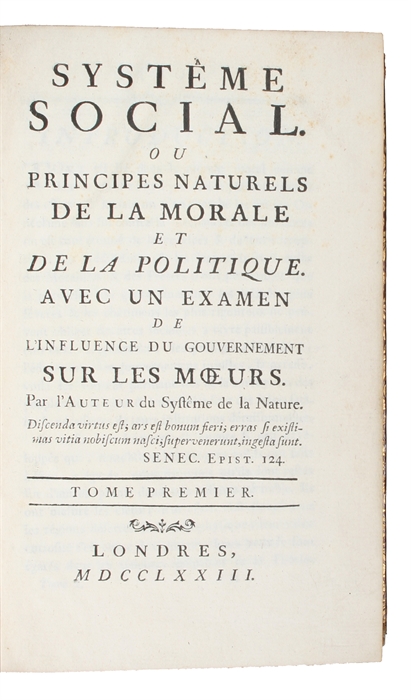 THE SYSTEM OF NATURE CONTINUED... THE SOCIAL SYSTEM

8vo. Bound in one beautiful contemporary full mottled calf binding with five raised bands to richly gilt spine; triple gilt line-borders to boards and inner gilt dentelles. Edges of boards with single gilt line. All edges gilt. Corners abit bumped and a bit of overall wear. Inner hinges a bit weak. Internally very fine and clean. All in all a very fine copy indeed. (4), 210; 176; 167 pp. With all three half-titles, all three title-pages and all three indexes, as well as the introduction.

The rare first edition, first issue (though Tchermerzine mentions an unknown 2-volume-edition form the same year - this edition has never been verified), of one of d'Holbach's most important works, his influential "social" and political continuation of his seminal main work "Systeme de la nature" - the bible of materialism.

D'Holbach (1723-1789), who was raised by a wealthy uncle, whom he inherited, together with his title of Baron, in 1753, maintained one of the most famous salons in Paris. This salon became the social and intellectual centre for the Encyclopédie, which was edited by Diderot and d'Alembert, whom he became closely connected with. D'Holbach himself also contributed decisively to the Encyclopédie, with at least 400 signed contributions, and probably as many unsigned, between 1752 and 1765. The "Côterie holbachique" or "the café of Europe", as the salon was known, attracted the most brilliant scientists, philosophers, writers and artists of the time (e.g. Diderot, d'Alembert, Helvetius, Voltaire, Hume, Sterne etc, etc.), and it became one of the most important gathering-places for the exchange of philosophical, scientific and political views under the "ancient régime". Apart from developing several foundational theories of seminal scientific and philosophical value, D'Holbach became known as one of the most skilled propagators and popularizers of scientific and philosophical ideas, promoting scientific progress and spreading philosophical ideas in a new and highly effective manner.

D'Holbach was himself the most audacious philosophe of this circle. During the 1760's he caused numerous anticlerical tracts (written in large, but not entirely, by himself) to be clandestinely printed abroad and illegally circulated in France. His philosophical masterpiece, the "Système de la nature, ou des lois du monde physique et du monde moral", a methodological and intransigent affirmation of materialism and atheism, appeared anonymously in 1770" (D.S.B. VI:468), as did the social and political follow-up of it, the famous "Systême social" in 1773. That is to say, Mirabeau whom he had used as the author on the "System of Nature" in 1770 is not mentioned in the "Social System", on the title-page of which is merely stated "By the Author of "Systême de la Nature".

As the theories of d'Holbach's two systematic works were at least as anticlerical and unaccepted as those of his smaller tracts, and on top of that so well presented and so convincing, it would have been dangerous for him to print any of them under his own name, and even under the name of the city or printer. Thus, "Systême de la Nature" appeared pseudonomously under the name of the secretary of the Académie Francaise, J.B. Mirabaud, who had died 10 years earlier, and under a fictive place of printing, namely London instead of Amsterdam. "He could not publish safely under his own name, but had the ingenious idea of using the names of recently dead French authors. Thus, in 1770, his most famous book, "The System of Nature", appeared under the name Jean-Baptiste Mirabaud." (PMM 215), and so the next "System" also appeared in the same manner three years later.

In his "Systême de la Nature", d'Holbach had presented philosophical materialism in an actual system for the first time and had created a work that dared unite the essence of all the essential material of the English and French Enlightenment and incorporate it into a closed materialistic system; on the basis of a completely materialistic and atheistic foundation, he provided the modern world with a moral and ethic philosophy, the effects of which were tremendous. It is this materialism and atheism that he continues three years later in his next systematic work "Systême social", through which politics, morality, and sociology are also incorporated into his system and take the place of the Christianity that he had so fiercely attacked earlier on. In this great work he extends his ethical views to the state and continues the description of human interest from "Systême de la Nature" by developing a notion of the just state (by d'Holbach calle "ethocracy") that is to secure general welfare. "Système social (1773; "Social System") placed morality and politics in a utilitarian framework wherein duty became prudent self-interest." (Encyclopaedia Brittanica). "Holbach's foundational view is that the most valuable thing a person seeking self-preservation can do is to unite with another person: "Man is of all beings the most necessary to man" (Sysème social, 76; cf. Spinoza's Ethics IVP35C1, C2, and S). Society, when it is just, unites for the common purpose of preservation and the securing of welfare, and society contracts with government for this purpose." (SEP).

Another edition of the work appeared later the same year, in 12mo. Tchermerzine says that "Il ya une édition, que nous ne connaissons pas, en 2 vol. in-8. C'est sans doute l'originale." The present edition was reprinted the following year, in 1774.