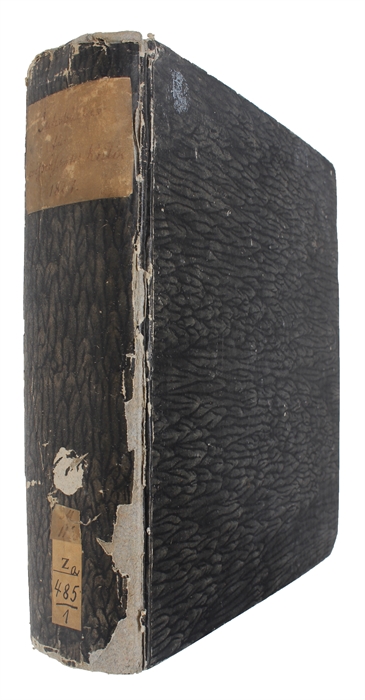 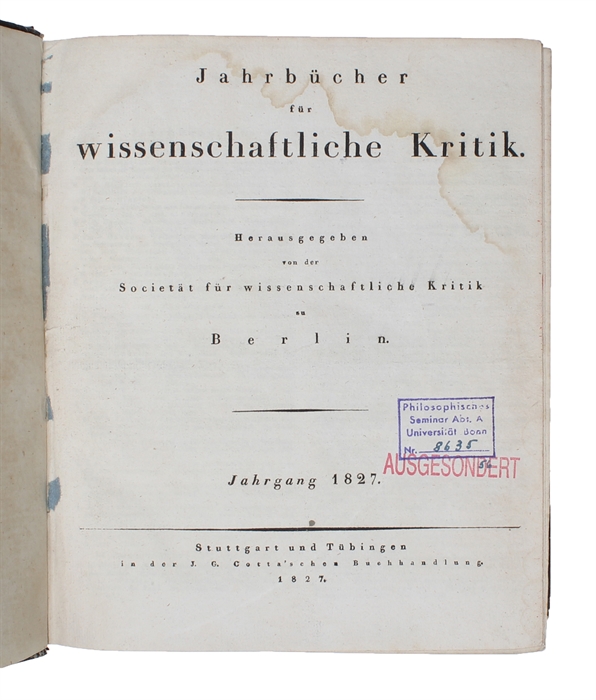 THE JOURNAL OF THE HEGELIAN RIGHT

The extremely rare first printing of all twelve issues, constituting the entire first year, of the seminal organ for the philosophical school that developed around Hegel, namely the "Yearbooks for Scientific Critique", issued by Hegel himself, constituting the starting-point of this greatly influential journal of the Hegelian right.

This entire first year, with its 12 issues, contains a wealth of highly important contributions, one being Hegel's own highly important review of Humboldt's lectures on the Bhagavad-Gita (delivered in June 1825 and 1826), "On The Episode of the Mahabharata Known by the Name Bhagavad-Gita", in which Hegel puts this Indian work in his large context of world history. Hegel's review, which appeared in two parts in the present publication for the first time (Jan., nos. 7-8, pp. 51-63 + Oct., nos. 181-88, pp. 1441-92) is now considered an extremely important document dealing with India. Humboldt's lectures had praised the Gita as the greatest, most beautiful, and presumably, the only real philosophical poem of all known literatures; Hegel's review was meant as a critical assessment of the Hindu world-view in toto in a comparison with European Weltanschauung.

In 1818 Hegel took over Fichte's chair at the University of Berlin. With his great lectures on the different fields of philosophy, he soon became widely famous and an important school formed around him. This Hegelian school grew to be extremely influential from the 1820'ies and onwards. From 1827, "the Jahrbücher", founded by Hegel himself, began appearing, working as the official organ for this seminal school.