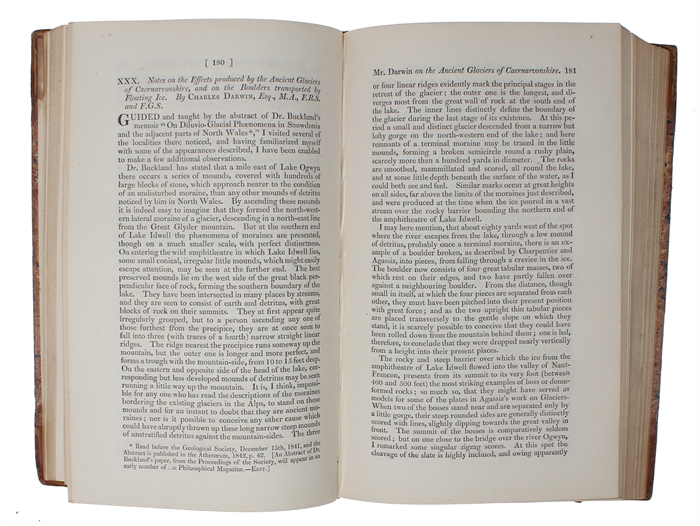 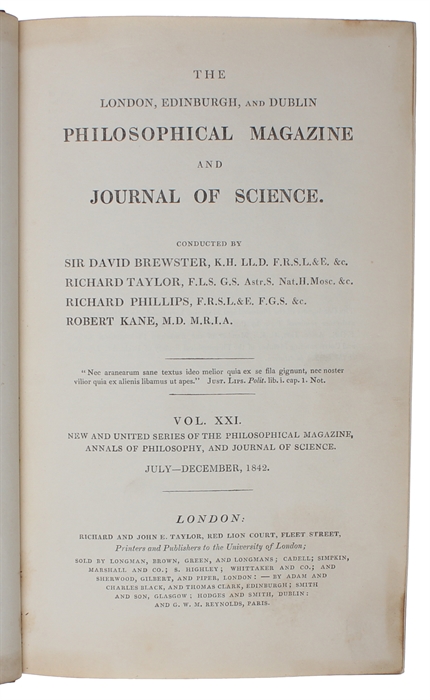 Notes on the Effects produced by the Ancient Glaciers of Caernarvonshire, and on the Boulders transported by Floating Ice.

First appearance of Darwin’s paper on the effects produced by the glaciers of Caernarvonshire.

In 1831 Charles Darwin came to Cwm Idwal and failed to perceive the evidence of glaciation there. In 1842, Darwin then went on to describe the glaciation of Cwm Idwal in some detail. He recorded both his first visit with the Cambridge geologist Adam Sedgwick and his second, more aware, visit in his autobiography:

“Next morning we started for Llangollen, Conway, Bangor, and Capel Curig. This tour was of decided use in teaching me a little how to make out the geology of a country. Sedgwick often sent me on a line parallel to his, telling me to bring back specimens of the rocks and to mark the stratification on a map. On this tour I had a striking instance of how easy it is to overlook phenomena, however conspicuous, before they have been observed by any one. We spent many hours in Cwm Idwal, examining all the rocks with extreme care, as Sedgwick was anxious to find fossils in them; but neither of us saw a trace of the wonderful glacial phenomena all around us; we did not notice the plainly scored rocks, the perched boulders, the lateral and terminal moraines. Yet these phenomena are so conspicuous that, as I declared in a paper published many years afterwards in the ‘Philosophical Magazine’ [Darwin, 1842], a house burnt down by fire did not tell its story more plainly than did this valley. If it had still been filled by a glacier, the phenomena would have been less distinct than they now are. (Darwin, 1887)”

“By 1842, not only had Darwin travelled widely (Herbert, 1991) but Agassiz (1840) had published his theory of glaciation. Darwin was also then apprised of the arguments of the geologist William Buckland. Buckland was known for his penchant for eating every variety of animal, a trait which his son inherited (Burgess, 1967: Chapter 1; Chorley et al., 1964: 100–118; see also Lewry, 2008) but he also developed highly significant ideas on glaciation and the limitations of the diluvial theory (Chorley et al., 1964: 207–210). A key realization is that water-lain flood deposits are normally laid down in stratified layers, with the coarser material below the fine, while the glacial deposits are unstratified and mixed in size. Thus, in contrast to his earlier 1831 lack of glacial observation” (Trudgill, Do theories tell us what to see? The 19th-century observations of Darwin, Ramsay and Bonney on glacial features), Darwin wrote:

“Guided and taught by the abstract of Dr. Buckland’s memoir ‘On Diluvio-Glacial Phænomena in Snowdonia and the adjacent parts of North Wales’ I visited several of the localities there noticed, and ... I have been enabled to make a few additional observations. Dr. Buckland has stated that a mile east of Lake Ogwyn there occurs a series of mounds, covered with hundreds of large blocks of stone, which approach nearer to the condition of an undisturbed moraine, than any other mounds of detritus noticed by him in North Wales. By ascending these mounds it is indeed easy to imagine that they formed the north-western lateral moraine of a Trudgill 559 Downloaded from ppg.sagepub.com at PENNSYLVANIA STATE UNIV on September 16, 2016 glacier, descending in a north-east line from the Great Glyder mountain. But at the southern end of Lake Idwell the phænomena of moraines are presented, though on a much smaller scale, with perfect distinctness. (From the present paper, p. 180)”

Darwin then gives a detailed description of the glacial features:

“On entering the wild amphitheatre in which Lake Idwell lies, some small conical, irregular little mounds, which might easily escape attention, may be seen at the further end. The best preserved mounds lie on the west side of the great black perpendicular face of rock, forming the southern boundary of the lake. They have been intersected in many places by streams, and they are seen to consist of earth and detritus, with great blocks of rock on their summits. They at first appear quite irregularly grouped, but to a person ascending any one of those furthest from the precipice, they are at once seen to fall into three (with traces of a fourth) narrow straight linear ridges. The ridge nearest the precipice runs someway up the mountain, but the outer one is longer and more perfect, and forms a trough with the mountain-side, from 10 to 15 feet deep. On the eastern and opposite side of the head of the lake, corresponding but less developed mounds of detritus may be seen running a little way up the mountain. It is, I think, impossible for any one who has read the descriptions of the moraines bordering the existing glaciers in the Alps, to stand on these mounds and for an instant to doubt that they are ancient moraines; nor is it possible to conceive any other cause which could have abruptly thrown up these long narrow steep mounds of unstratified detritus against the mountain-sides. (From the present paper, p. 180)”