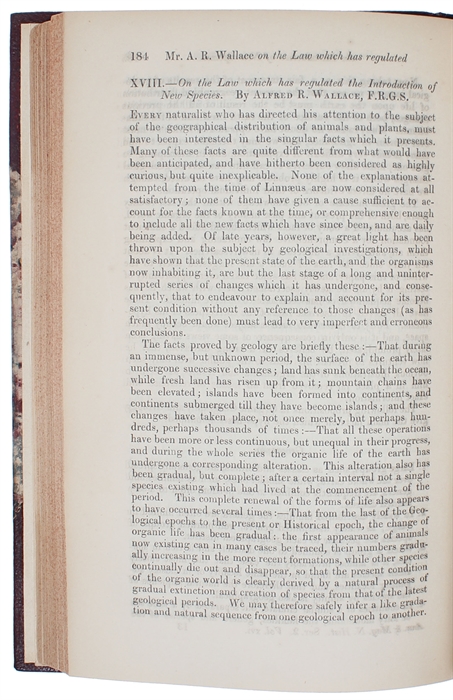 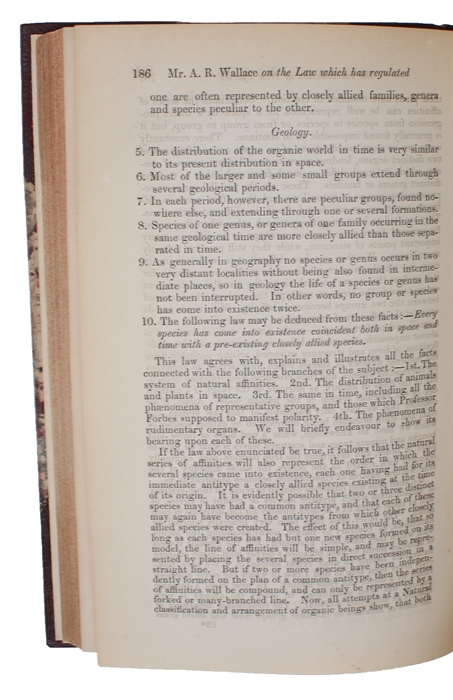 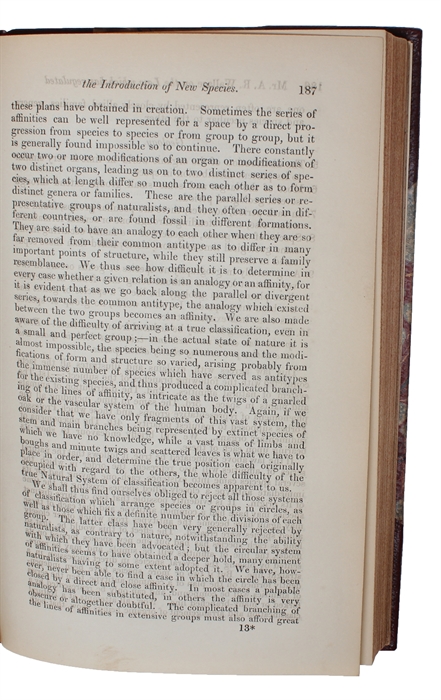 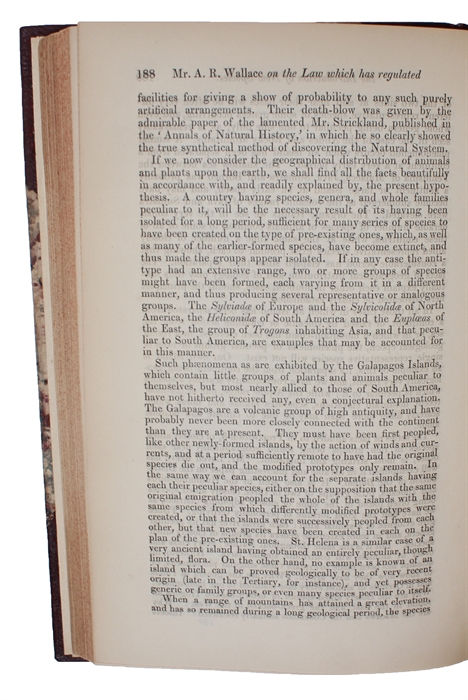 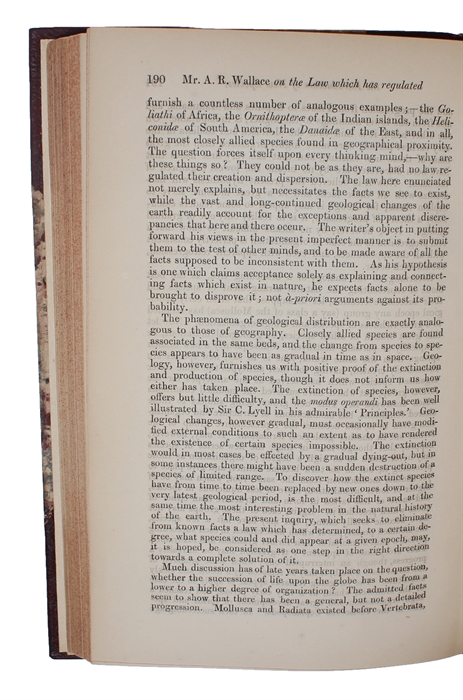 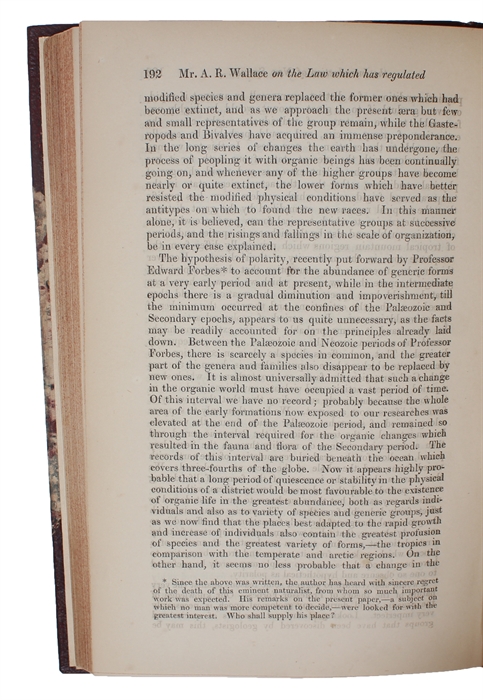 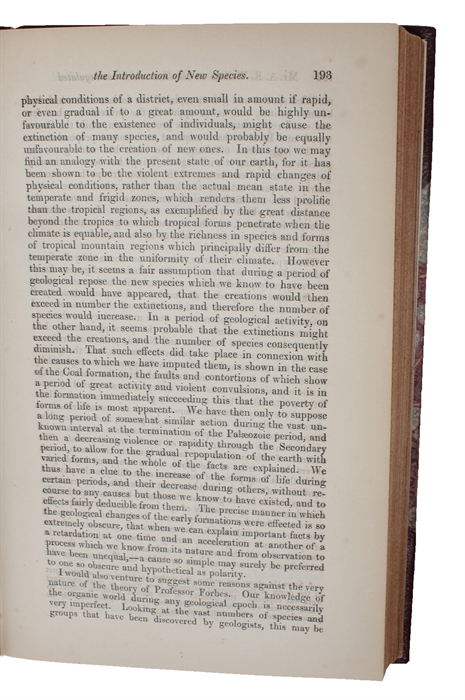 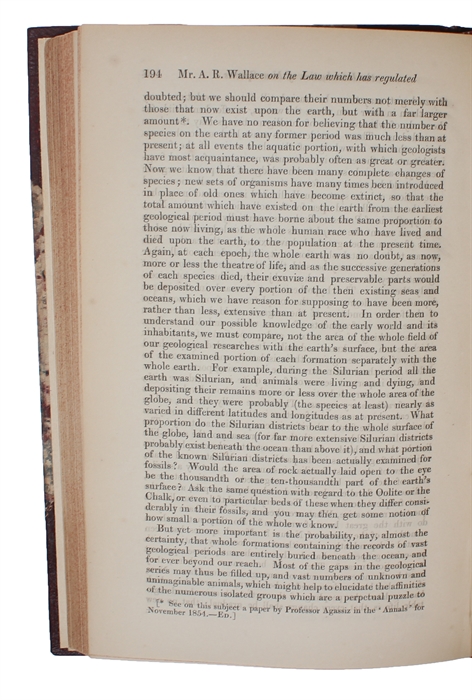 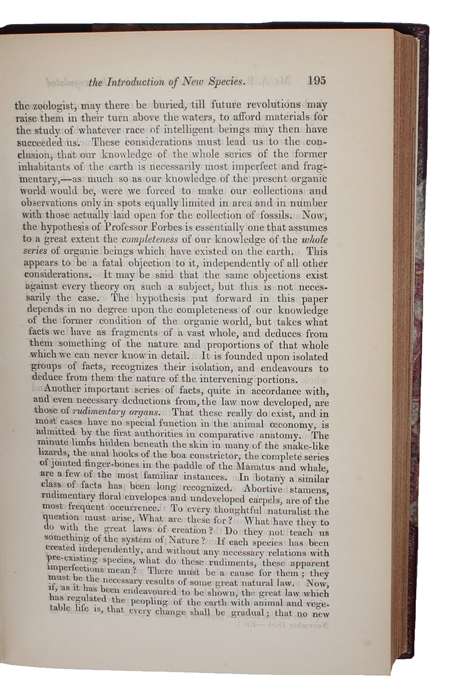 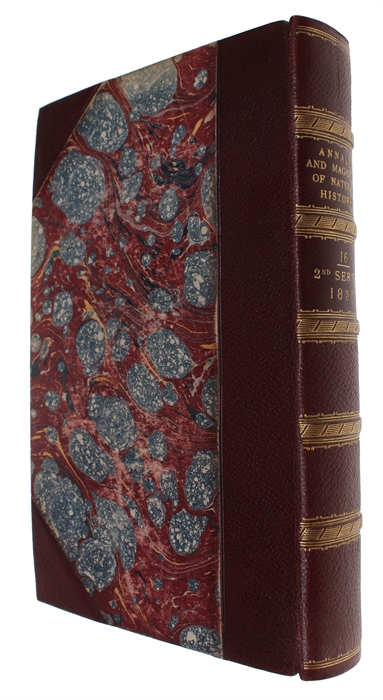 INAUGURATING THE DISCOVERY OF THE ORIGIN OF SPECIES

On the Law which has Regulated the Introduction of New Species. [In: The Annals and Magazine of Natural History. Second Series, Volume 16].

From as early as 1845, Wallace had been convinced of the idea that species arise through natural laws rather than by divine fiat and he invested all in supplying scientific details and uncovering a satisfactory evolutionary mechanism. He kept this more or less to himself, however, and refrained from commenting on it in public until 1855, when he, provoked by an article by Edward Forbes Jr., published this seminal paper, "a concise synthesis of his ideas on the subject. Like many brilliant works, his "On the Law Which Has Regulated the Introduction of New Species" (September 1855) was based on well-known, acceptable scientific observations, although he had transformed the mass of facts into an unusually persuasive argument. The evidence was drawn from geology and geography - the distribution of species in time and space - and following nine acceptable generalizations (axioms), Wallace concluded: "Every species has come into existence coincident both in space and time with a pre-existing closely allied species". He claimed that he had explained "the natural system of arrangement of organic beings, their geographical distribution, their geological sequence", as well as the reason for peculiar anatomical structures of organisms." (D.S.B.).

It was this paper by Wallace - not greatly read in the public, but very seriously studied by the greatest biologists of the time - that led directly to Darwin beginning his "origin of Species". - "Despite this excellent presentation (i.e. Wallace's 1855 paper), there were no public replies, although the private comments were quite another matter. Indeed, Edward Blyth, Charles Lyell, and Charles Darwin all read Wallace's article and were greatly impressed by his arguments, but in particular Lyell, who began a complete reexamination of his long-held ideas on species. On 16 April 1856 Lyell discussed Wallace's paper with Darwin, urging him to publish his own views on species as soon as possible. Darwin then began what we now call the long version of the "Origin", and that version was used as a basis for the "Origin" as published in 1859." (D.S.B.).

It was in 1848 that Wallace first left England for the tropics. He did so with his friend the entomologist Henry Walter Bates, with the specific intention of solving the problem of the origin of species. "In the autumn of 1847 Mr. A.R. Wallace, who has since acquired wide fame in connection with the Darwinian theory of Natural Selection, proposed to me a joint expedition to the river Amazonas, for the purpose of exploring the Natural History of its banks; the plan being to make for ourselves a collection of objects, dispose of the duplicates in London to pay expenses, and gather facts, as Mr. Wallace expressed it in one of his letters, "towards solving the problem of the origin of species"." (Bates I: p. III).

It is during these travels that Wallace begins noticing the remarkable coincidences in the distribution of species in space and time, and in 1855, while sitting in Sarawak, Borneo, he writes the paper that is now a landmark work in the history of evolutionary thought, his so-called "Sarawak-paper", which was published later the same year in the present volume of "The Annals and Magazine of Natural History".

"This paper, formulating what came to be known as the "Sarawak Law", is remarkable... (Wallace) advances what is, in effect, half of the theory of evolution, namely what Darwin would call "descent with modification": the idea that the generation of a biological novelty is a genealogical process." (Berry, p. XXVII).

The law now known as the Sarawak Law, or "the first half of the theory of eveolution", is stated as follows: "Every species has come into existence coincident both in time and space with a pre-existing closely allied species." This law connected and explained a vast number of independent facts. It was, in fact, Wallace's first statement of a belief in evolution, and for the following three years from the time that he wrote the essay, Wallace recounts that "the question of how changes of species could have been brought about was rarely out of my mind."

According to one of the most celebrated anecdotes in the history of science, the second half of the theory of evolution by natural selection finally came to Wallace in February 1858, while delirious during an attack of malarial fever in Ternate in the Mollucas. In his own words, "there suddenly flashed upon me the idea of the survival of the fittest." The theory was thought out during the rest of the fit, drafted the same evening, and written out in full in the two succeeding evenings. Knowing that Darwin was working on the same problem, Wallace sent a manuscript summary to Darwin, who now feared that his discovery would be pre-empted. In order to avoid conflict between the two, Joseph Hooker and Carles Lyell suggested a joint publication. The essay was read, together with an abstract of Darwin's own views, as a joint paper at the Linnean Society on the 1st of July 1858.