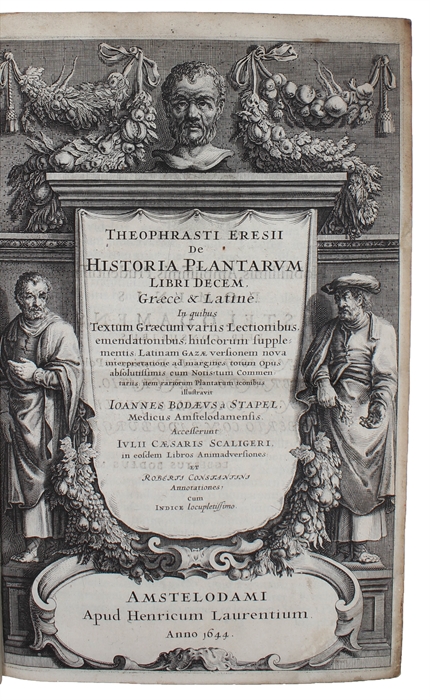 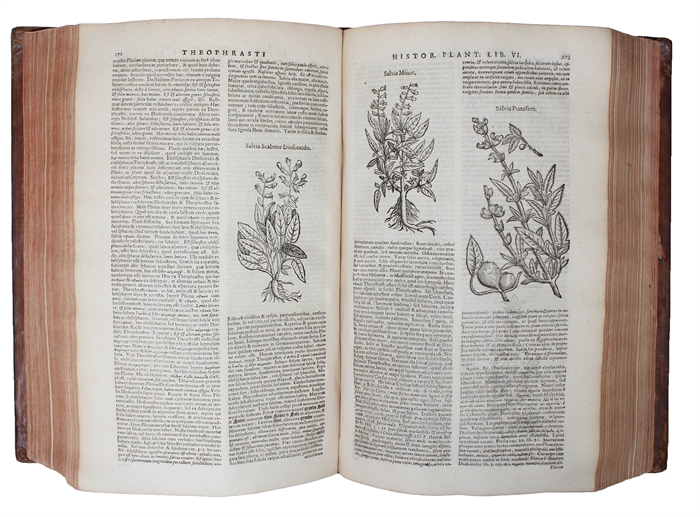 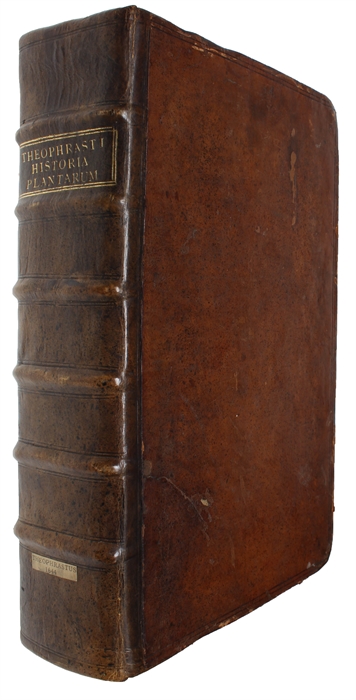 THE MOST IMPORTANT BOTANICAL WORK OF THE 17TH CENTURY

Folio. Contemporary full vellum with neat later (19th century) rebacking. Six raised bands and gilt title to spine. Some wear to extremities. Internally a fresh and clean copy with only a bit of occasional brownspotting. Endpapers with a bit of soiling. 2 bookplates to inside of front board: Gilbert Redgrave, London (dated 1894) & Gorden M. Jones, Virginia. Text in Greek and Latin. Woodcut title-page, numerous woodcut intials throughout, and more than 600 woodcut illustrations in the text. (20), 1187, (1), (88 - Index) pp.

First edition thus, being the most important and influential edition of Theophrastus' seminal work "Enquiry into Plants" - the first systematization of the botanical world and the most important contribution to botanical science up until the Renaissance. Bodaeus von Stapel's groundbreaking edition constitutes the first illustrated edition of Theophrastus' masterpiece as well as the first with both Greek and Latin text. Furthermore, von Stapel has not only collected all relevant commentaries and knowledge, he has also added corrections and much foundational information, turning the work into one of the most influential botanical works of the 17th century, profoundly influencing the likes of Linnaeus and contributing significantly to the development of modern scientific botany.

"This edition displays great care and research; the notes are numerous and learned, and all botanical information to be gleaned from Aristotle, Pliny, Dioscorides, and other ancient writers, seems to be embodied in this work. The Greek text is Heinsius's; the Latin version is that of the editor, who has placed Gaza's in the margin, with frequent corrections. The conjectures of Scaliger, Constantine, and Salmasius, are also incorporated... it has collected into one body the opinions of the old writers on the subject of the PLANTS. It contains some wood-cuts of the rarer species, which are much better uncoloured than coloured." Dibdin II:498).

The numerous woodcut plant illustrations were partly copied from other sources and partly made especially for this edition. Thus, apart from being "one of the best and most thoughtfully prepared of all the editions of Theophrastos" (Hunt), our editor has also made original contributions that are of great importance. "It is interesting not only because of the brilliance of the editing, but, curiously enough, to the American botanist as well, for involving in the discussion certain species from Virginia, other parts of the New World, and Asia. The illustrations of these plants have been largely overlooked in botanical history, because of their incidental presence in a work which might not be expected to contain anything of the sort. Some were merely borrowed from l'Ecluse or de Lobel, but others seem original in this work" (H.H. Bartlett: Fifty-five Rare Books - quoted by Hunt).

At the height of the Renaissance, with the expansion of the known world and the spreading of the book due to the invention of the printing press, many new publications on plants appeared. Most of these publications, however, were primarily concerned with the medicinal qualities of individual plants and only few authors or editors took an interest in the general nature of the plants and how they could systematically be classified. One of the few exceptions was Bodaeus von Stapel. With his seminal 1644 edition of "Historia Plantarum", he focused on the overarching classification system of plants and took Theophrastus' work a step further, adding essential commentaries and illustrations - illustrations that were to be copied for centuries after. These illustrations remain the standard illustrations of Theophrastus' foundational work.

This edition of Theophrastus' "Historia Plantarum" became the standard edition of that earliest work on systematic botany and the edition that all serious scientific botanists of the 17th and 18th centuries will have studied. "Linnaeus, in the practice of his favourite art of systematizing, classified not only plants but the writers about them. The writers he distinguishes primarily as Botanists, and Plant Lovers, recognizing as Botanists only such as treat of plants from some philosophic or scientific point of view. Choosing his illustrations from annals of remote antiquity, he names among the earliest of the Greeks who wrote of plants Hippocrates; but because he wrote of plants only in the interests of medicine Linnaeus styles him Father of Medicine... Similarly Aristotle... is down in the Linnaean list of ancient celebrities as Prince of Philosophers. To Theophrastus, however, he accords the title Father of Botany. From this opinion, far from having been newly promulgated in Linnaeus's time, there has been no dissenting voice. On the contrary, Albert Haller, one of the most learned men in Europe in his day, and a botanist of such renown that Linnaeus held him in reverence, and also in some fear, denominates Theophrastus "the first of real botanists in point of time." Kurt Sprengel in the nineteenth century, having rehearsed the names of a long line of ancient authors who had written more or less concerning plants, says: "But the most illustrious of them all, and the true father of botany, was Theophrastus Eresius…." (Greene, Landmarks of Botanical History, I:128).

It is no wonder that Linnaeus should find in Theophrastus the Father of his own field - The "Historia Plantarum" was not only the earliest work on systematic botany, it also contained Theophrastus' description of the formation of the plant seed, the earliest account known and the best that was made for 2000 years.