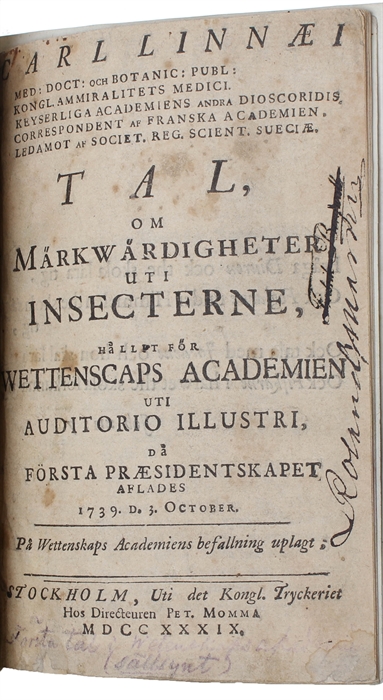 Small 8vo. Preserved in covers of older blindstamped golden paper. Title-page a bit soiled and with old owner's names (one of them crossed out, the other one being Roland Martin). A small restoration to lower blank margin of title-page. Woodcut initial at beginning and woodcut end-vignette. (18) pp.

Exceedingly rare first edition, first issue (with an excellent provenance) of Linnaeus' seminal speech which has gone down in history as one of the most famous and influential summations on the economy of nature - demonstrated by "curiosities among insects". With poetical eloquence, Linnaeus shows us the wonder of the small creature that is the insect and beautifully ties together the nature of the world that we live in, providing to all living things a means and an end. Published merely four years after the groundbreaking first edition of the "Systema Natura" - and two decades before the definitive 10th edition of it - Linnaeus, in this epochal speech, points us to the fact that only with the "Systema Natura" had the true nature of the insect been discovered, revealing to us also the true wonder of nature.

This groundbreaking speech was given at the inauguration of the Royal Academy of Sciences in Stockholm in 1739. Linnaeus himself was one of the founders of the academy; this foundational speech not only marks the beginning of the world-changing Academy of Sciences, being the first in a long series of presiding speeches that were given four times a year (when the Academy chose a new chairman), it also marks an epoch in the theory of natural history. The frequent reprinting of the speech bears witness to its epochal character and the importance it came to hold for Linnaeus himself. The extremely scarce first issue was printed by Momma in a poor antiqua setting, mixing three different styles, and the last three pages are in a smaller font. New issues appeared in Swedish in 1747 and 1752, the speech was reprinted in Latin numerous times in different issues of the "Amoenitates", and it was translated into English and German.

When occupying oneself with the greatest modern zoologist, Carl von Linné, the founder of binominal nomenclature, one rarely comes across references to his philosophical theory of the world. Unlike many modern thinkers, 18th century scientists and philosophers did not find the notion of God as ruler of the Universe incompatible with hard scientific facts. On the contrary, the relationship between God and Nature was an issue of crucial importance to many natural scientists of the period. The present speech constitutes the most important declaration of Linnaeus' thoughts on the subject, presenting him as what we would call a "physicotheologist". By means of the "curiosities among insects", Linnaeus here presents Nature as a single, self-regulating global entity - an entity that is a wonder created by God.

The present publication constitutes one of the most personal works that Linnaeus ever wrote and provides with a direct insight into his entire world view - the view of the world that enabled us to properly classify and systematize all living things.

It is not least due to the present work that Linnaeus was so widely admired by the greatest of his contemporaries. In his own time he was not only admired for his great scientific accomplishments, he became famous for wider cultural reasons and for the moral qualities that understream his scientific work. That is the main reason why he was considered a hero by the likes of Rousseau and why the likes of Goethe made debating Linnaeus a pastime in fashionable Romantic circles.

The work is of the greatest scarcity. OCLC lists merely six copies in libraries world-wide, two of which are in the US: Kansas State University and North Carolina State University. The remaining four copies are in: Sweden, France, UK, and The Netherlands.

ROLAND MARTIN (1726-1788) was prominent physician, who was a student of Linnaeus. He studied at the University of Uppsala and here defended his dissertation in 1745 (under Linnaeus). He was nominated professor of medicine twice, but refused both times. He was considered an excellent teacher and a great physician, but he was a controversian man and caused dramatic debacle when he left the Collegium medicum and joined the Societas chirurgica (only to return in 1766, with a tarnished reputation).