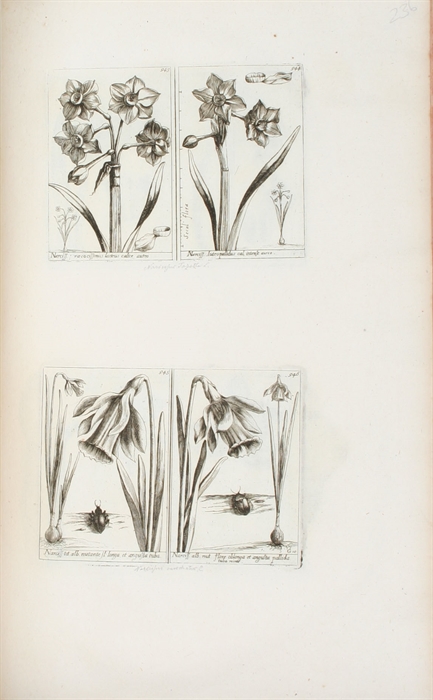 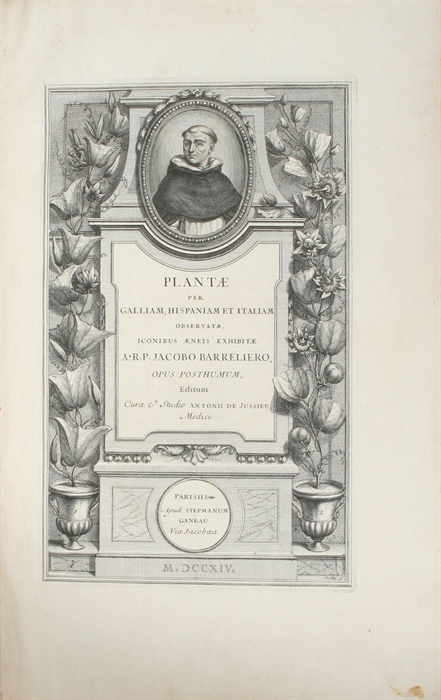 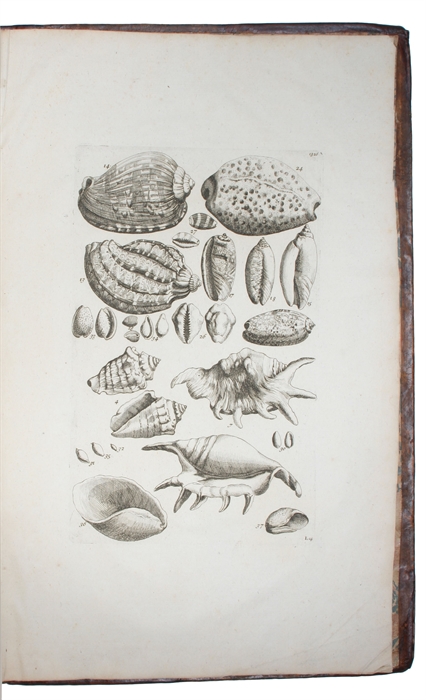 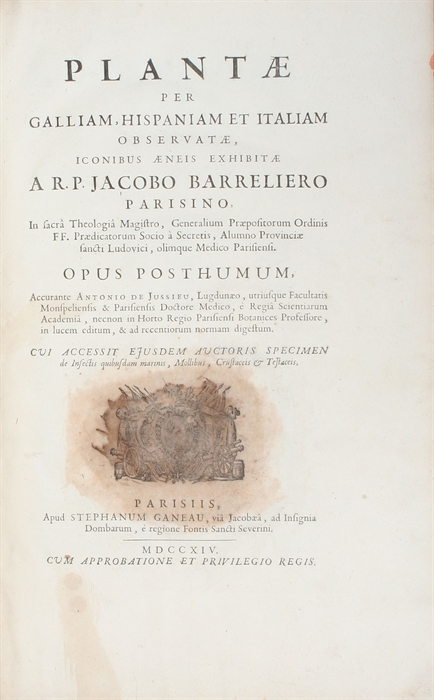 EXTENSIVE WORK ON FLOWERS OF FRANCE, SPAIN AND ITALY

Paris, Steph.Ganeau, 1714. Folio. Bound in one beautiful cont.full mottled calf w. six raised bands, gilt compartments. Hinges, capitals and corners professionally restored. Internally very nice and clean, apart from heavy browning to the smaller woodcut of the second title-page. Engraved title-page, title-page w. woodcut vignette, XXVI, (19), 140 pp., second engraved title-page, and 334 sheets of plates, containing 1327 fine engravings on 334 sheets (being 331 sheets with four engravings on each and three sheets with one large engraving on each; all of these are numbered (the engravings on the first 331 sheets are numbered 1-1324); number 406 has to extras, being 406+ and 406*, number 673 has one extra being 673+, number 674 has one extra, being 674+, numbers 826, 827 and 828 are collected on one engraving, and numbers 1076 and 1256 (would have been within the plates that consist of four engravings each) are omitted), complete. All of the first 331 sheets consist of four illustration, and most of them are made as four separate engravings, but some of them are made frofrom just two engravings, but still depicting four illustrations of axactly the same measure as the rest.

First edition of Barrelier's chief botanical work, his famous "Hortus Mundi", for which he was supported financially by Gaston von Orléans but which he never finished due to illness. The text was destroyed in a fire after his death, but the numerous drawings survived and in 1714, ab. 40 years after Barrelier's death, Antoine de Jussieu published the work with the original plates under the title "Plantae per Galliam...".

Jacques Barrelier (1606 - 1673) was a French Dominican, botanist and physician. He undertook extensive travels throughout France, Spain and Italy and spent 25 years in Rome, where he founded the botanical garden of the Saint-Xyste convent. During his time in Rome he worked on his magnum opus, which was later to become his "Plantae per Galliam...", for which he had an enormous amount of engravings made after his numerous drawings of plants. When he returned to Paris in 1672, he had stopped working on his great work, and in 1973 he died of an asthma-attack. The text for the work is destroyed in a fire, but the engravings are saved, which makes it possible for Antoine de Jussieu about 40 years later to publish the work the Barrelier never came to finish himself.

Antoine de Jussieu (1686-1758) was out of a prominent French family distinguished for ist excellent botanists. He was a physician who also practiced medicine and devoted much of his time to treating the very poor. He studied at the University of Montpellier, and like Barrelier, he travelled through Spain and Portugal. In 1708 he went to Paris, where he succeeded J.P. de Tournefort at the Jardin des Plantes. His main works are his publication of Barrelier's "Plantae per Galliam..." and an edition of Tournefort's "Institutiones rei herbariae", printed in 1719 in three volumes.

Barrelier has given name to the flower genus "Barleria", which covers roughly 300 species.