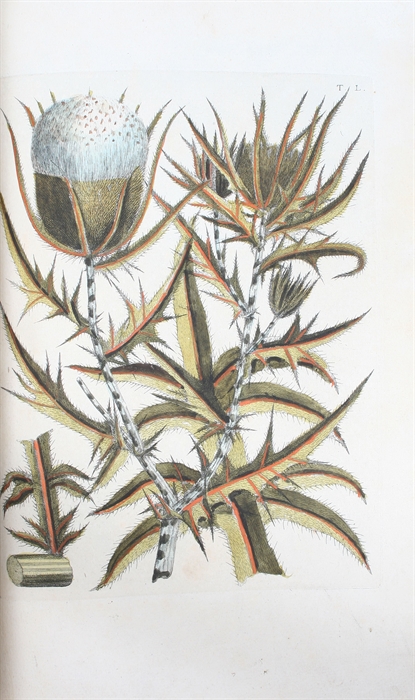 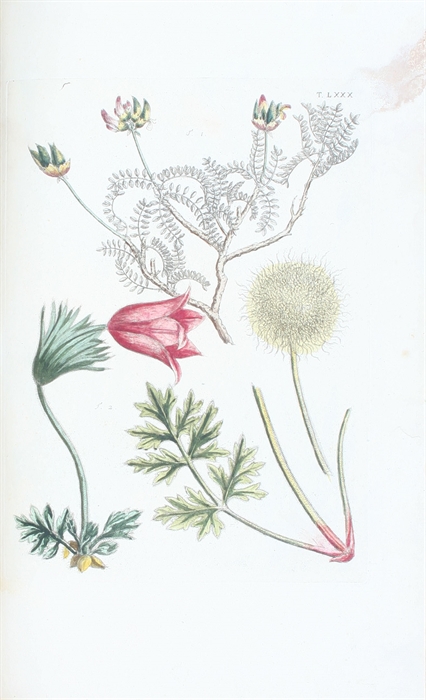 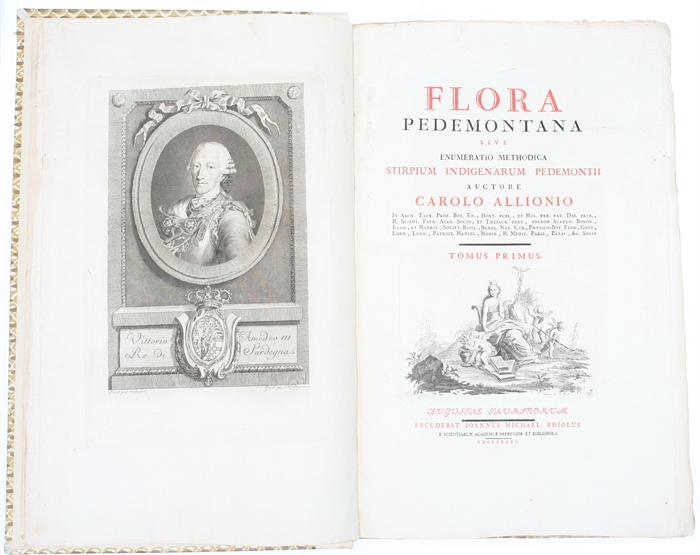 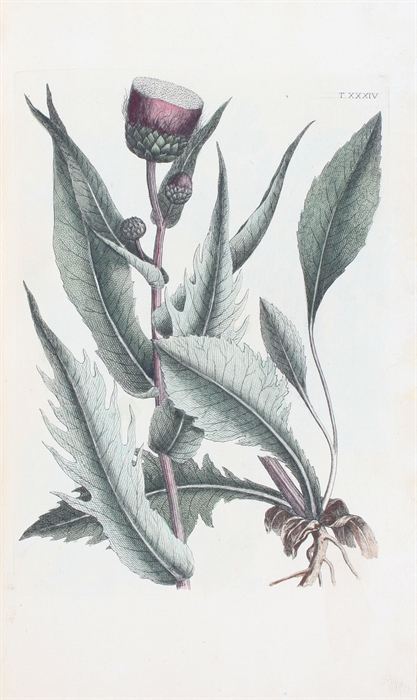 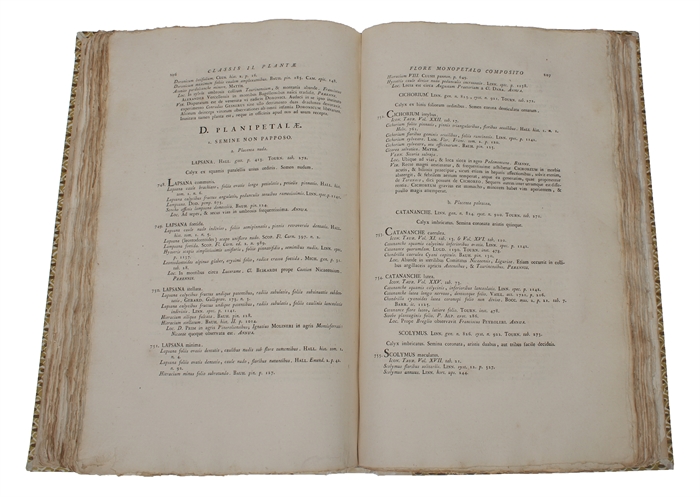 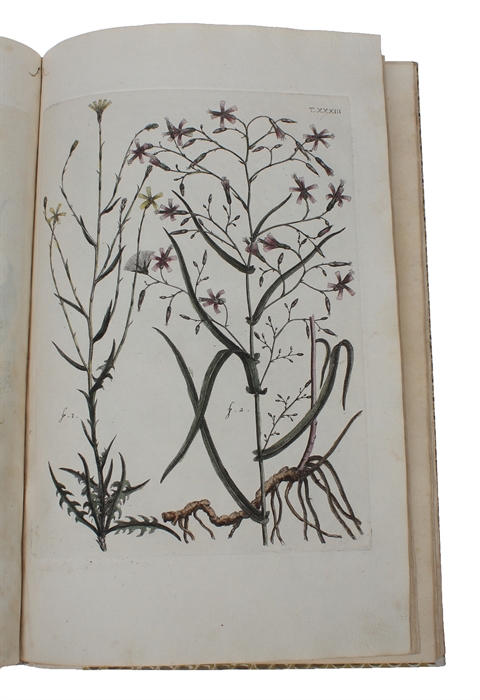 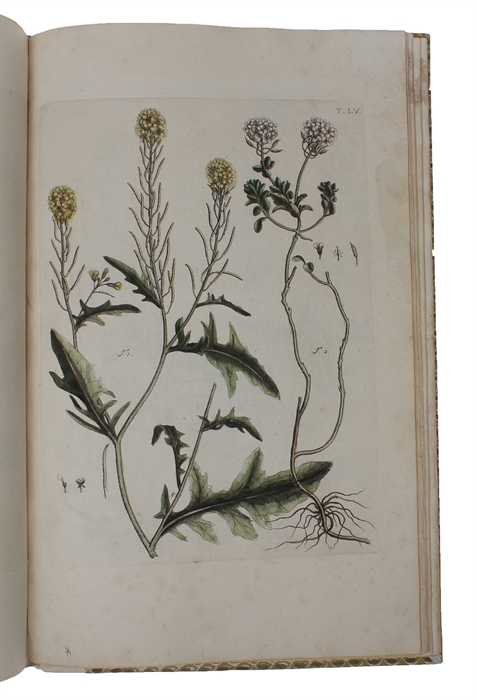 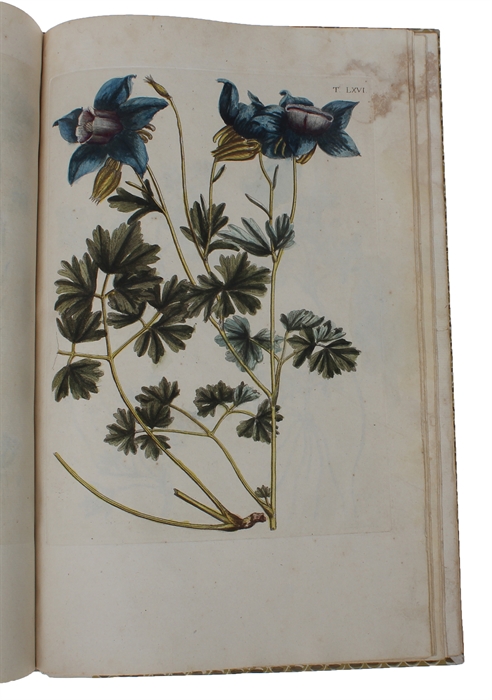 GIVING BIRTH TO THE APPLICATION OF THE LINNEAN NOMENCLATURE

The Piedmontese Flora is Allioni's main work. In the text it describes 2.831 species of Piedmont plants, and the plates depict 92 hitherto unknown or very rare species of plants, many of which have been discovered by Allioni himself or by his illustrator. The 92 beautiful plates are drawn by Francisco Peiroleri and engraved by his son Petrus Peiroleri. The work was more than 25 years on its way, and with its appearance Allioni established his reputation as one of the main botanists of the 18th century.

This work is considered one of the most important flower books of Europe and undoubtedly the most important of Piedmont, and it has received worldwide fame as one of the most beautiful and important alpine botanical works. With this work Allioni is the first to organize the flora of Piedmont in a modern system, i.e applying the new principles of nomenclature after the Linnean model, and for this reason he is called the Linné of Piedmont. He actually corresponded much with Linné, who also considered him a reformist botanical writer and even named the New World herb genus Allionia after him.

Carlo Allioni was an Italian physician and botanist and is considered one of the greatest experts in scientific botany and medicine in Europe in the 18th century. He was born in Turin in 1728 and finished his medical studies in 1747. He had planned to become a professor of medicine, but decided to devote himself to the study of natural history and became one of the most important botanists of the century. "As a young man of twenty-five, Carlo Allioni made a botanical tour of Piedmont and Savoy, but he was sixty and nearly blind when the "Flora Pedemontana", his most important work, was published. He had been for many years Professor of Botany and Director of the Botanical Garden of the University of Turin, and was a corresponding associate of learned societies from Spain to Sweden." (Alice M. Coats, The Book of Flowers, 1973. Nr. 80).
In the 18th century botanical science underwent somewhat of a rebirth, mainly caused by the writings of Linné. However, Linné was not alone in making his discoveries and systems known and applied, and several important botanists helped pave the way for the taking over of the Linnean nomenclature system. Not only had Linné turned the way of classifying, arranging and naming species upside down, he had also discovered many new species and begun to compile local floras. One of his devoted followers was Allioni, who devoted himself entirely to the new system and became an enthusiastic advocate for it. The Flora Pedemontana, which had been under preparation for about 25 years, when it appeared in 1785, represents the epitome of Allioni's floral studies, and it represents a scientific study of the utmost importance, since it practically applies the new principles of botanical nomenclature.

The illustrator, Francesco Peyroleri aus Viù, was a very gifted self-taught botanical painter, who was famous for his artistic abilities as well as his home-made colours that were made from the flowers he knew from the botanical gardens. He was also renowned for his special way of pressing the plants from below on to the humid paper in order to achieve a better sense of relief in the figures. Though he was self-taught, he possessed such skills that he quickly became an authority, whom many others asked for advise, and he was counted as an equal by the masters. "In Allionis "Flora Pedemontana", deren Tafeln er sämtlich gezeichnet hat, wird er nicht selten als Finder oder Entdecker angeführt. Der Stecher dieser Tafeln, Francescos Sohn Pietro Peyroleri, hatte bereits 1755 im Alter von 14 Jahren die Zeichnungen des Vaters für Allionis "Rariorum Pedemontii stirpium specimen primum" vervielfältigt" Seine Ausbildung hatte er dann von Carlo Emanuele Beaumont empfangen, der wie Bartolozzi ein Schüler Joseph Wagners in Venedig war." (Nissen I, p. 154).

Together these two major authorities, Allioni and Peiroleri, have made a hugely important and lasting contribution of great beauty to the history of scientific botany, which became a main publication of the Age of Enlightenment.

Coloured copies of the work are known to exist, but they are extremely scarce.

Stafleu and Cowan nr. 100 (Flora Pedemontana) + 101 (the Auctuarium). Nr. 100: "The plates (copper engravings) are by Francisco Peyrolery (engraved by Pietro Peyrolery), mostly uncoloured; coloured copies are rare… Becherer (1953) has shown that the 23 specific names marked with a dagger are to be attributed to Allioni and not to Bellardi who had provided information on the relevant species to Allioni but who had not named them."

Nissen 18. The "Auctuarium" is here wrongly registered by Nissen as containing 80 pp. and 7 plates.

Alice M. Coats, The Book of Flowers, 1973. Nr. 80: The Carline Thistle. The plant, "which is shown here, was distinguished and named by Allioni."

The work was reprinted in 2003, in order to coincide with the 80th anniversary of the great botanist (2204).