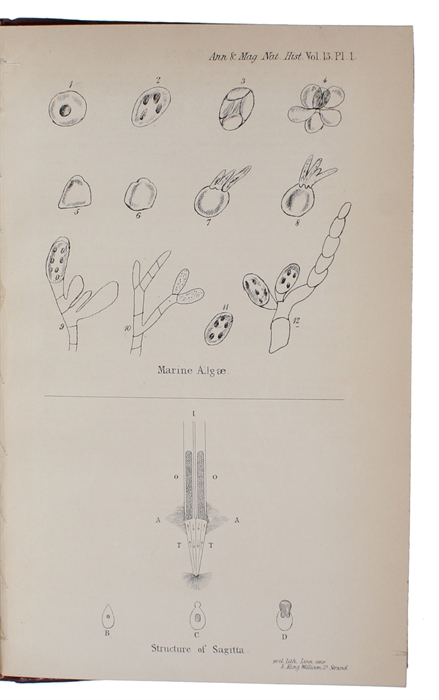 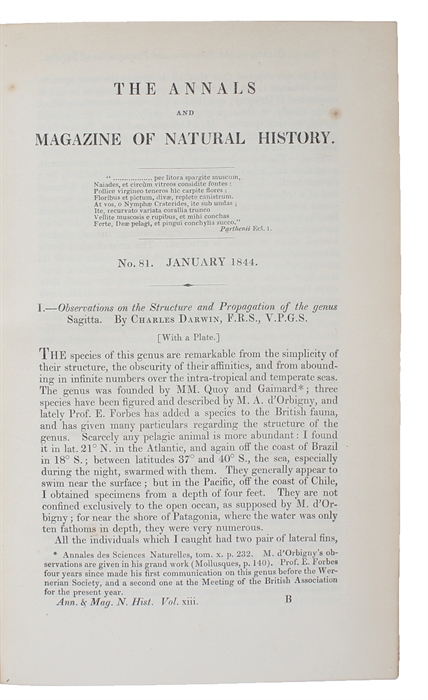 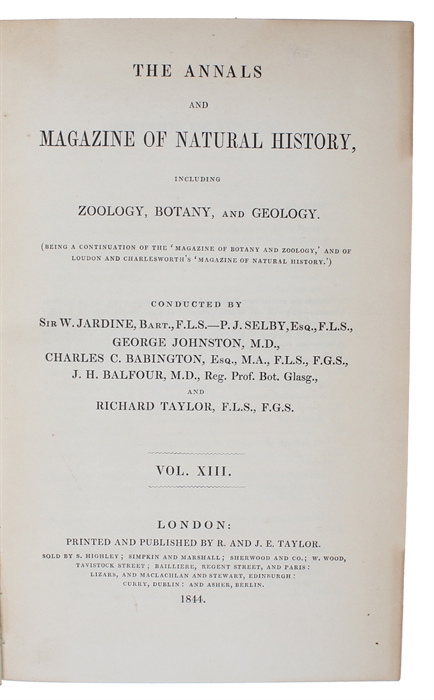 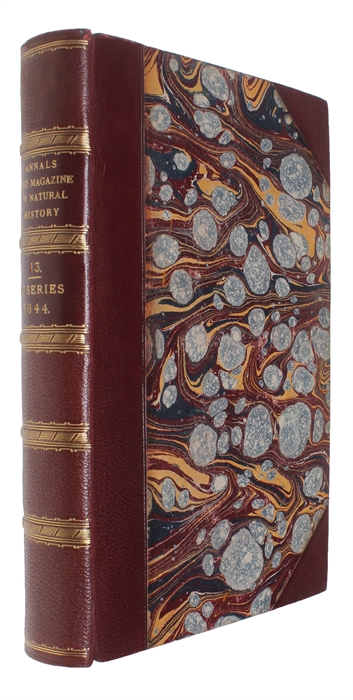 "ONE OF THE MOST ANOMALOUS ANIMALS IN THE WORLD"

Observations on the Structure and Propagation of the genus Sagitta.

First edition of Darwin's paper on marine arrow worms collected by him on his voyage on the Beagle. It is one of Darwin's early papers on invertebrates, which was originally intended for publication in The Zoology of the Voyage of HMS Beagle. Described by Darwin as "one of the most anomalous animals in the world," the origin of these strange carnivorous animals, which Darwin found highly interesting, is still unresolved. These early works are rarely seen on the market. The plate, drawn by Darwin, is based on his drawings made during the Beagle Voyage.

Darwin arrived back in England from his voyage around the world on the Beagle in October 1836. He immediately set about writing up the results of the expedition-first, his general account, the Journal of the Beagle, and then, publishing the scientific observations and collections he had made while on the Beagle. The majority of these were published in the Zoology-including parts on mammals, fish, birds, and reptiles but Darwin ran out of funds before
he could bring out the volume on invertebrates:

"Darwin undertook to provide a comprehensive programme for the publication of the zoological results of the Beagle voyage - he obtained a Treasury grant to pay for the necessary engravings, and, having enlisted the leading taxonomical specialists in the several fields, he superintended the publication of the Zoology of the voyage of H.M.S. Beagle from February 1838 to October 1843 - The work comprises five parts: Fossil Mammalia, by
Richard Owen; Mammalia, by G. R. Waterhouse; Birds, by John Gould; Fish, by Leonard Jenyns; and Reptiles, by Thomas Bell-a total of nineteen quarto issues. Darwin contributed a substantial portion of the text, drawing upon
his field notes for geological and geographical data and for the descriptions of the habits and habitats of the species - Darwin had originally planned to include descriptions of invertebrates in the Zoology but the exhaustion of
the government grant forced him to abandon the idea. Instead he decided to publish his own observations and descriptions of the specimens that he considered to be important new discoveries, and did so in articles on Sagitta
finished during the autumn of 1843, and Planariae, described in 1844" (Burkhardt 1986 p. xv.).

PROVENANCE: From the collection William Pickett Harris, Jr. (1897 - 1972) (pencil note on p. iii). American investment banker and biologist. Following a career in banking, Harris was appointed Associate Curator of the Museum of Zoology at the University of Michigan in 1928. "[Harris] played a highly important role in developing mammalogy and systematic collections of mammals at the University of Michigan" (Hooper p. 923).