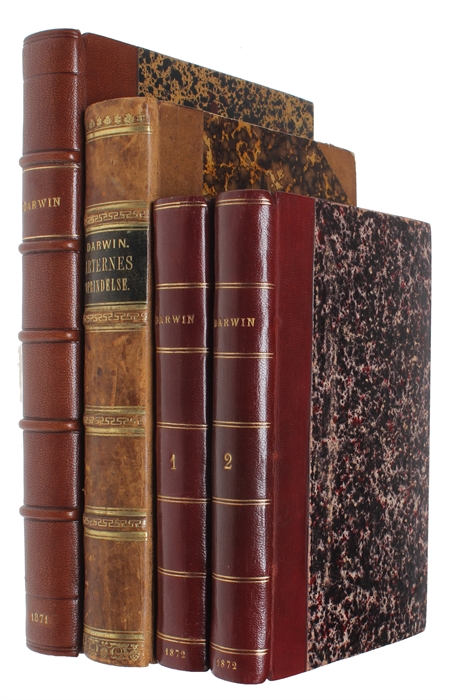 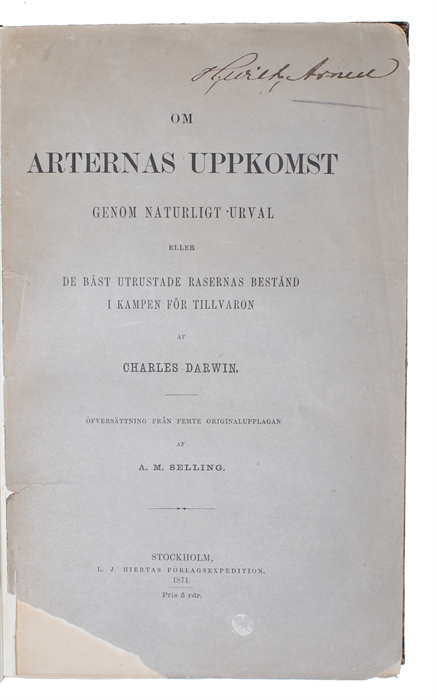 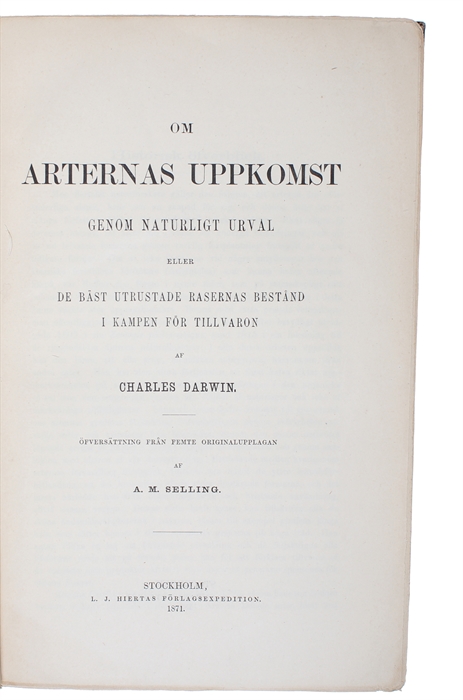 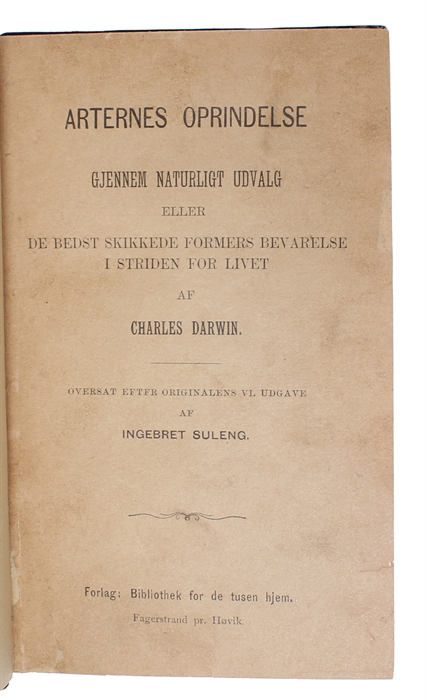 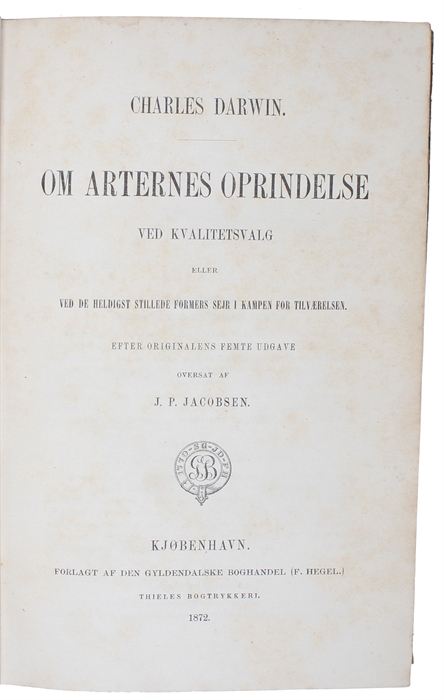 INTRODUCTION OF THE "ORIGIN" IN SCANDINAVIA

A very nice and harmonious set, in four excellent half calf bindings.
1) The Danish translation: 1 volume 8vo. A nice contemporary half calf with gilding to spine and gilt title-label. Only light wear. Internally some light brownspotting. (19), XIII, 605, (1) pp.
2) The Norwegian translation: 2 volumes small 8vo. Bound in two excellent, uniform, recent red morocco bindings in pastiche-style, with gilt lines to spines. The work is printed in quite bad paper, which is always yellowed and quite brittle. Thus, the first title-page has two small restorations from verso, far from arrecting printing. The second title-page had an old owener's signature and a previous owner's stamp. 379, (5); 383 pp.
3) The Swedish translation: 1 volume large 8vo. Bound uncut and with the extremely scarce original front wrapper in a lovely later brown half morrocco binding in contemporary style, with five raised bands and gilt author and year to spine. Front wrapper bound on a strip at inner hinge and with a missing outer coner (far from affecting printing). Old owner's name to front wrapper. An excellent copy. XI, (1), 420 pp.

A magnificent collection of first editions of the first Danish, Norwegian and Swedish translations of Darwin's masterpiece "The Origin of Species", together constituting the introduction to "The Darwinian Revolution in Scandinavia".

The first Scandinavian translation to appear was the Swedish, which is also the rarest of the three. Darwinism was strongly opposed in Sweden, where the primary reaction to the work came from religious institutions that were outraged and fiercely fought against spreading the ideas presented in "origin" in their country.
The second Scandinavian translation to appear was the Danish, which was translated in 1872 by the then young botanist J. P. Jacobsen, who was soon to become one f Scandinavia's most celebrated and influential authors. He received world-wide fame as the author of "Marie Grubbe" and "Niels Lyhne", which founded literary naturalism in Europe. "In the early 1870's, however, he was still dedicated to science. In 1873 he received the University of Copenhagen's Gold Medal for his work on desmids, single-celled green freshwater algae. The Descent of Man was also translated by Jacobsen and appeared in 1874-75."
Darwin's ideas found great resonance in scientific circles in Denmark, and his ideas were immediately recognized.

"In the early 1870s [With the Danish translation] the literary critic Georg Brandes started promoting Darwin's ideas as part of his liberal ideology and soon Darwinism became the mark of a new generation of intellectuals. Both the Steenstrup circle and the Brandes circle held Darwin in high esteem, but made completely different attributions to his theory. Consequently they both decided to raise money separately for the same Darwin.
Darwin had borrowed the collection of barnacles from the Zoology Museum in Copenhagen with the help of Steenstrup. As a compliment Darwin sent him a signed copy of the Origin. Steenstrup acknowledged Darwin as an important fellow naturalist, but like many of his colleagues at the University of Copenhagen he never accepted evolutionary theory. The initial scientific reaction to Darwin's work on evolution by means of natural selection was respectful, but made few converts. memorial in 1882. Independently, Darwinism transformed as it became part of popular culture. " (Kjærsgaard, Darwinism comes to Denmark).

The Norwegian translation was the last of the three to appear, but it is quite scarce and very difficult to come by. It was published by businessman and publisher Johan Sørensen (1830-1918) as a part of 'Bibliothek for de tusen hjem' (Library for Every Home).

"The first volume came out at the end of 1889, in five parts and a total of 379 pages. Each part cost 30 øre, making a total price of 1 kroner 50 øre. The following year, 1890, the second volume appeared and this consisted of four parts totaling 383 pages and cost 1 kroner 20 øre. The books were translated from the English sixth and final edition by the Master of the Arendal Public Secondary College, Ingebret Suleng (1852-1928)" (Glick, The Reception of Charles Darwin in Europe).