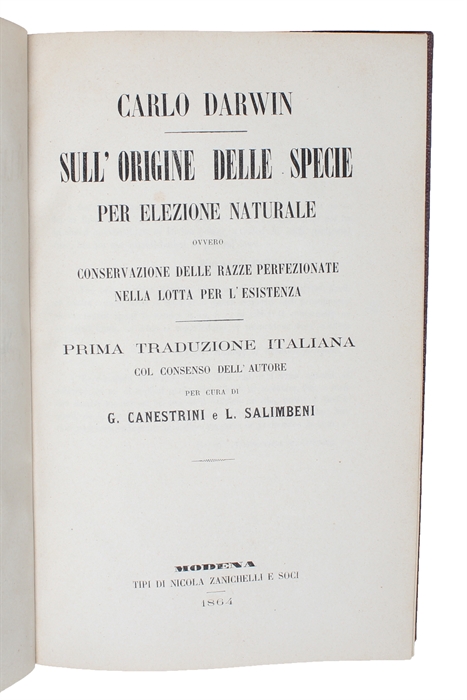 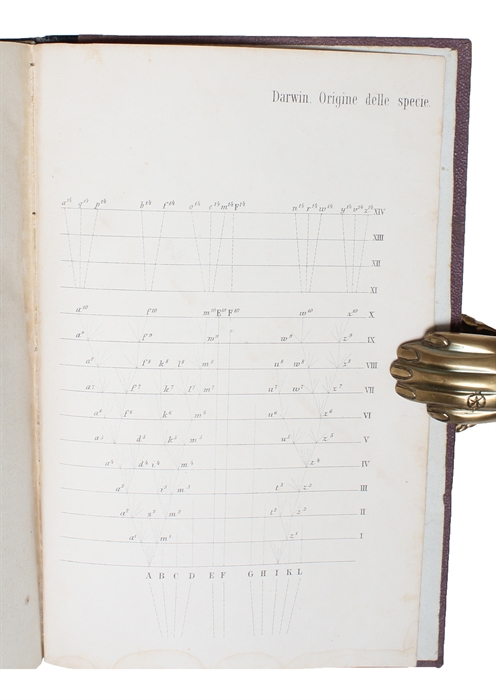 8vo. In contemporary half calf with four raised bands and gilt lettering to spine. Reinforced in inner margins and plate with waterstains to lower margin. An unusually fine and well preserved copy, internally as well as externally. XV, 403 pp + 1 plate.

Rare first edition of the first Italian translation of Darwin's seminal "Origin of Species", quite unusually, authorized by Darwin himself. The work was very well received and - compared to France and Spain - Darwinism was quickly adopted by Italian biologist and zoologist and meet only little catholic opposition.

"The impact of Darwinism on Italian naturalists was powerful; the logic and rigorous treatment of the problem of the origin of species as Darwin had presented it, forced zoologists and anthropologists to reconsider those passages of Lamarckisms that they had agreed to with excessive enthusiasm". (Capanna, Darwinism and the Italian academies).

The reception of Darwin's work in France (1862) and Spain (1877) were characterized by a strong chatolic opposition, which also had a strong suppressing effect on the spread of his ideas to academic institutions.
Despite of Italy being a catholic stronghold the reception of Darwinism was very favourable and meet very limited criticism from the church:

"In contrast to the power Catholicism was able to exert against Darwinism in Spain, it was practically impotent in Italy. Neither could the Italian Catholic intellectual establishment draw upon a repertory of anti-Darwinism arguments from the Italian scientific establishment, as was done in France. As in France under the Third Republic and as was the case sporadically in Spain, the advent of Darwinism in Italy provided a source of ideology for the anticlerical movement. Although Darwinism enjoyed a number of close connections with the English source, the peculiarities of the Italian situation set Darwinism in Italy apart from other situations. Italy was in the forefront in recognizing Darwin, electing him to various academies and societies and awarding him the famous Bressa Prize in 1875.
In Italy the translation of the Origin "1864" was given an impeccable scientific presentation by Giocanni Canestrini and Leonardo Salimbeni, which avoided the type of situation that arose from the presentation of Darwinism in France by Clémence Royer as a new scientific basis for a secularistic Weltanschauung. As a general explanation, of course, it is reasonable to accept Cermenati's arguments that the favorable receptivity of the scientific community and the general indifference to ecclesiastical objections to Darwinism are the chief factors explaining the quick spread of Darwinism in Italy". (Glick, The Comparative Reception of Darwinism).

Emma Darwin, Darwin's wife, wrote publisher John Murry on the 17th of December: "Mr Darwin desires me to say that as you have never hesitated to authorize a foreign translation he has taken upon himself to authorise a translation into Italian without consulting you."
When Darwin was informed that his work was being translated into Italian he wrote to his close friend J. D. Hooker: "There is an Italian Edit. of Origin preparing!!! This makes fifth foreign Edit, ie in five foreign countries. Owen will not be right in telling Longmans that Book wd be utterly forgotten in ten years. Hurrah!".