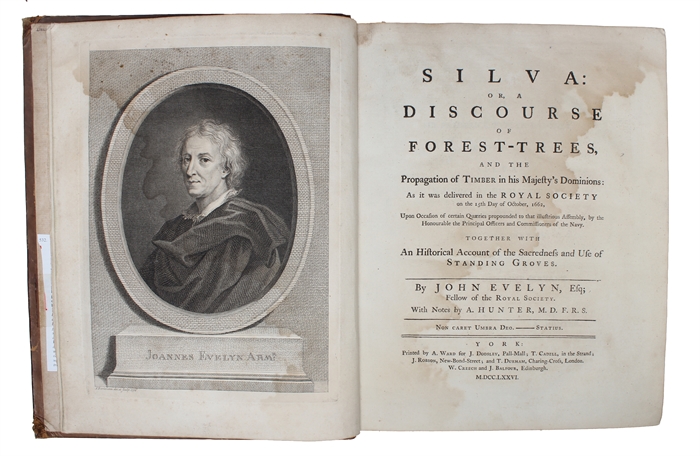 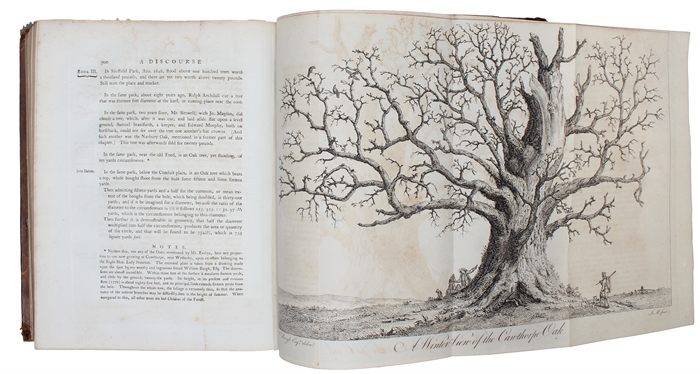 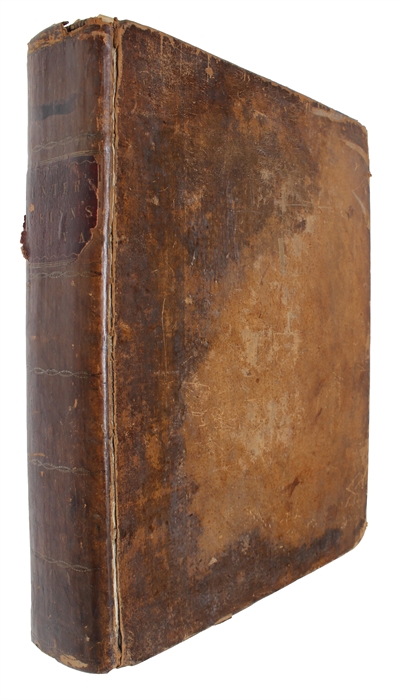 Silva or, a discourse of forest-trees, and the propagation of timber in his Majesty's dominions: As It Was Delivered in the Royal Society on the 15th Day of October, 1662. Upon Occasion of certain queries propounded to that Illustrious Assembly, by the Honourable the Principal Officers and Commissioners of the Navy. Together with an Historical Account of the Sacredness and use of Standing Groves.

First Hunter edition, sixth overall, of this landmark work on forestry, one of the most influential texts ever published on the subject. The work shaped both the knowledge and the landscape of an entire nation throughout centuries.

"There can be no doubt that John Evelyn, both during his own lifetime and throughout the two centuries which have elapsed since his death in 1706, has exerted more individual influence, through his charming "Sylva", ... than can be ascribed to any other individual." (Nisbet, in the preface to the 1908 reprint of the 1706-edition).

Apart from its pivotal importance to forestry, reforestration, the history of planting in Europe and the direct benefits from that, the book is famously the first book to be printed by the Royal Society, which had been founded in 1664 (the second being Robert Hooke's "Microscopia").

The book was a huge success and it became immensely influential, making Evelyn famous among his contemporaries - such as Pepys, Hooke, and Locke - as a horticultural pioneer .

"If you take a stroll through one of the nation's long-established woodlands, there is a good chance its management was inspired, influenced or even instructed by John Evelyn's Sylva.
Widely recognised as the first comprehensive study of UK trees, Sylva, or - to give its full title - A Discourse of Forest Trees, and the Propagation of Timber in his Majesty's Dominions, made its first public appearance in 1662 as a paper submitted to the newly formed Royal Society.

Two years later, it was published as the Royal Society's first book and went on to not only shape people's knowledge but the landscape itself.

And it was an instant success, proving popular beyond its intended audience of wealthy aristocratic landowners, who were urged by Evelyn to plant trees in order to replenish the nation's depleted timber stock.

Four editions were produced during Evelyn's lifetime, and the book is still widely quoted and remains in print and freely available online 350 years after its first publication.
...
He designed his first garden when he was 22 years old, two decades before he penned Sylva.

It was as a young man, after deciding fighting as a Royalist in the Civil War was not the best career choice, that he travelled across Europe and became fascinated by the formal gardens of France and the expansive grounds of Italy.
On his return to England, he continued his work in the garden of his home at Sayes Court in Deptford, South-East London.
Being located near the Royal Dockyard on the Thames allowed Evelyn to experiment with newly arrived botanical delights, testing how the flora fared in his English country garden.

His attention to detail, and the careful recording of his observations reflected the appetite for empirical evidence among the early pioneers of modern science.

"He was one of the early fellows of the Royal Society, which was created in 1660 as a scientific organisation, and Evelyn had spoken with the fellows about his work in this area and it very much chimed with the Society's early objectives," explained Royal Society head librarian Keith Moore.

What we do now will have a knock-on effect for generations to come Dr Gabriel Hemery, The New Sylva co-author:
"Quite clearly, Evelyn's work in planting forest trees and harvesting the products from them - whether it was wood or apples - really hit the mark; it was exactly what the Royal Society was interested in at that time."
And so the seeds of Sylva's success were planted, as landowners heeded Evelyn's advice.

"Of course, you have to remember that this was after the Civil War so trees across the nation had been denuded as part of the war effort but, as Evelyn himself says in the book, as a result of industrial activities - such as glass making - people were chopping down trees, therefore they had to be replaced," he told BBC News.

"Also, he uses the phrase 'wooden walls' - [trees] were very important for the defence of the nation through ship building."
...

And there were echoes of Evelyn in 1919, the year in which the UK's Forestry Commission was established to increase tree cover, which had fallen to just 5% as a result of the demand for timber during World War One.
Today, trees are back in the headlines and on the political agenda. To coincide with the original book's 350th anniversary, two authors have written The New Sylva, a timely updated version for the 21st Century to highlight the strategic, economic and ecological importance of trees." (Mark Kinver, BBC News, Science & Environment: Trees: A personal and national legacy of Evelyn's Sylva. 2014)