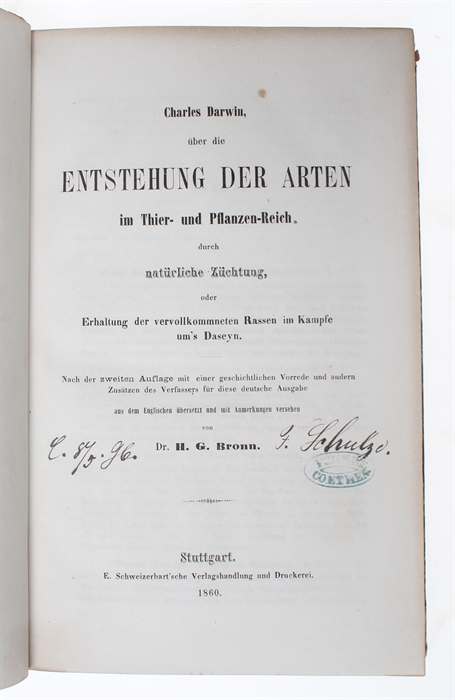 8vo. Bound in contemporary half calf with gilt lettering and ornamentation to spine. Small stamp and previous owner signature to title page. Leather on lower part of spine with a tear and part detached. Hinges weak but book-block firmly attached. VIII (including half, 520, (6) pp + 1 plate.

The very scarce first edition of the highly important first German translation, which appeared just months after the original.
This translation came to play a tremendous role in the spreading of Darwinism in Germany and Northern Europe in general. It was through this translation that Darwinian thought reached most of the German scientists and thinkers of the period, and it was this translation that challenged German scholars to think in new ways about morphology, systematics, paleontology, and other biological disciplines. It was from this translation that Ernst Haeckel, Darwin's most famous nineteenth-century proponent and popularizer in Germany, got his Darwinism and was able to further spread the new ideas in his own country.

The German translation of Darwin's "The Origin of Species" appeared in 1860, just months after the original, thanks to Heinrich Georg Bronn, a distinguished German paleontologist whose work in some ways paralleled Darwin's. Bronn's version of the book (with his own notes and commentary appended) did much to determine how Darwin's theory was understood and applied by German biologists, for the translation process involved more than the mere substitution of German words for English.

"Its [Origin of Species] greatest impact on German biological practice lay in the introduction of historical modes of explanation for the observable phenomena of living nature. The historical approach to nature was rejected, not only by the opponents of evolution, but also by the idealist evolutionist. Whether they favored a teleological or a reductionist biology, the idealists could not see the point of a theory that emphasized the irregularities and exceptions in the organic world. In the timeless real of idealist thinking, unchanging laws worked out an inevitable destiny. But Darwin taught his followers to look at living beings one by one. Thus prompted, they recognized, as if for the first time, the surprising fact of anomaly and the wisdom of an open-ended theory." (Glick, The Comparative Reception of Darwinism).

"Darwin was not happy about the first German translation. It was done from the second English edition by H.G. Bronn, who had, at Darwin's suggestion, added an appendix of the difficulties which occurred to him; but he had also excised bits of which he did not approve. This edition also contains the historical sketch in its shorter and earlier form." (Freeman).

Freeman No 672 - Freeman does not mention the lithographed plate.