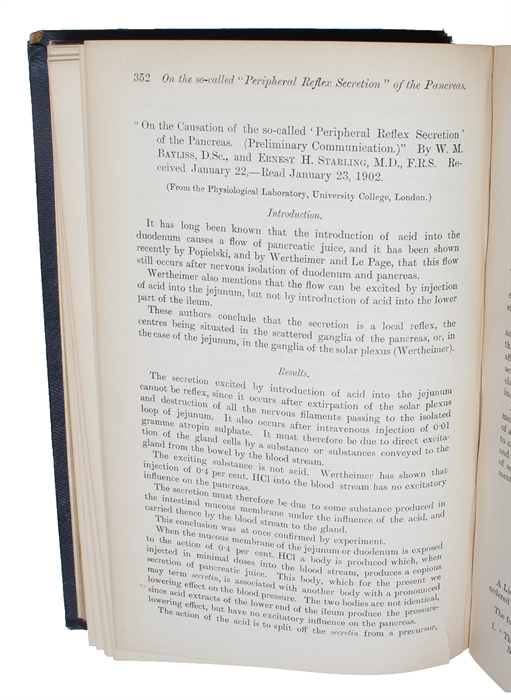 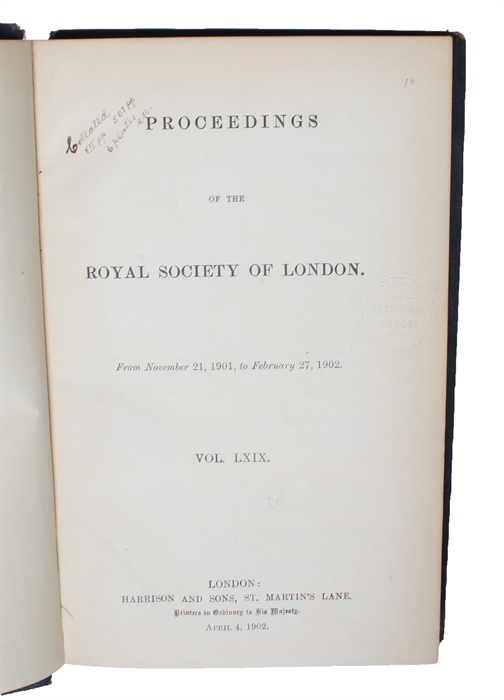 On the Causation of the so-called 'Peripheral Secretion' of the Pancreas (Preliminary Communication). Received January 22, - Read January 23, 1902.

London, Harrison and Sons, 1902. 8vo. Contemp. full cloth. Top of spine worn down. Lower spine end with a small crack. A collation remark on title-page. A bookmark on inside frontcover, stating that the volume was bound 10/9/02 for City of Manchester. Municipal Technical School. "Proceedings of the Royal Society", Vol. 69. VII,501 pp. a. 6 plates. Bayliss & Starling's announcement: pp. 352-353. Internally clean.

This is the first printing, annoucing a milestone discovery which introduced a quite new field in physiology and medicine, the discovery of the FIRST HORMONE, which the discoverers named "Secretin". A few years later Sterling coined the word 'hormone' from the Greek 'hormon', meaning to exite or set into motion. Until know it was though that the control of the glands, here the pancreas, was controlled by the nerves (Pavlow and others), but Bayliss and Sterling showed that they have found that the intestine was signalling the pancreas by some COMPLETELY NEW MECHANISM involving a new kind of body or substance functioning as a chemical messenger. "If nerves are the sprinters of biology, Bayliss & Starling had discovered the marathon runners. In doing so, they also founded the science of hormones, called endocrinology" (Alan Lightman "The Discoveries", p. 34 ff).
The announcement, as offered here, was later the same year followed by their larger paper "The Mechanism of Pancreatic Secretion" which they published in "Journal of Physiology (1902)".


"With the discovery of hormones, Bayliss & Starling had found the internal command and control centers - and in this, their discovery was much larger than a new communication system. The mechanism of response and control was chemical: atoms and molecules. Now, with hormones, there was a mechanism for a living thing to regulate itself. Furthermore with hormones, an organism could not only be studied but also controlled from the outside... Never had the living body come closer to a machine, a self-regulating machine governed not only by physics but also chemistry. An not only a machine, but a machine that we human could willfully control. At the start of the new century, we still have not come to terms with the implications of this idea."(Alan Lightman).