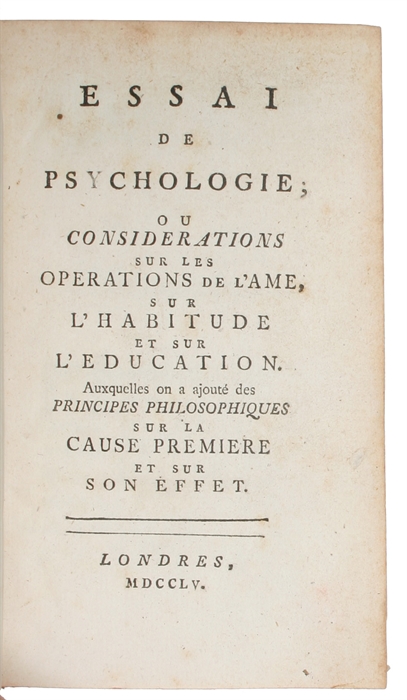 Bonnet's movement or "vibration" model, which is presented in the present work for the first time, constitutes a much elaborated model of the internal representation of ideas that Newton had also discussed. His contributions to the field of neuro-psychology were highly original, and his theories which included the idea that the understanding of human (and animal) behavior presupposes knowledge of the nervous system and its functions caused quite a stir at the time of their appearance.
With the present work, Bonnet became a pioneer in the study of the physiological bases of behavior, and his theories and experiments on the relationship between psychological and physiological processes were much ahead of his time.

"Bonnet is considered one of the fathers of modern biology. He is distinguished for both his experimental research and his philosophy, which exerted a profound influence upon the naturalists of the eighteenth and nineteenth centuries. " (D.S.B. II: 286).

After at the age of 26 having discovered the parthenogenesis of the aphid (plant lice), which established virginal generation, having written important works in the field of regeneration of rainwater worms, a groundbreaking work on insectology, which "entitles him consideration as an early exponent of experimental entomology" (D.S.B. II: 286), a work which established him as one of the first naturalists to investigate photosynthesis, and several other works of interest, the Swiss natural historian, biologist and philosopher Charles Bonnet (1720-1793) began concentrating on philosophy and methodology. "A true theoretician of biology, he exercised an enormous influence in this field and maintained a correspondence with almost all the scientists of his time. He published works that caused a considerable stir - among them "Essai de psychologie"..." (D.S.B. II: 286).