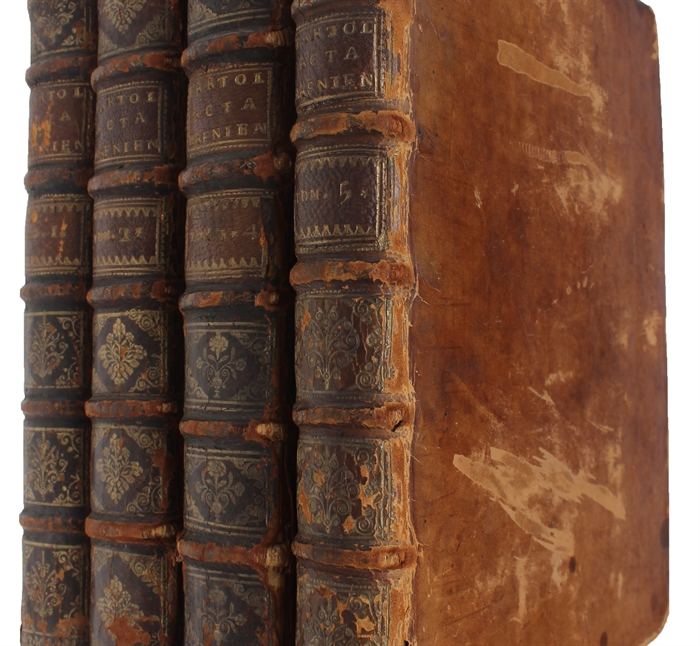 4to. Bound in four full mottled calf bindings from ab. 1800 with five raised bands to richly gilt spines. All edges of baords gilt. Bindings with some wear, especially to capitals, hinges, and corners. Old owner's inscription "AEM Schleisveig/ Paris 1 Juli 1889" to front free end-papers. Some brownspotting and browned leaves. Woodcut vignettes and initials. All four title-pages (part III & IV have a joint title-page) printed in red and black. (16), 316; (20), 376; (16), 174, 216; (8), 342 pp. With ab. 60 woodcut illustrations in the text, many of them quite large, two of them full-page, and all 62 engraved plates (of which two are on a folded leaf), four of which are folded. Fully complete, with all five volumes and all 62 plates.

The very rare first edition of all five volumes of Bartholin's groundbreaking medical journal, which constitutes the first scientific periodical in Scandinavia and one of the very first medical periodicals in the world.

Thomas Bartholin (1616-1680) was one of the leading physicians of his time, now remembered, among many other things, as the discoverer of the lymphatic system. He "was the most celebrated physician of his period in Denmark and perhaps in all of Europe". (Kronick, p. 81). He is considered "a typical representative of the "Curiosi naturae" of the 17th century with all their learning, diligence and insatiable spirit of curiosity... He belonged with all his heart to the learned period, and yet he made an anatomical-physiological discovery of high mark when he found, and demonstrated, a hitherto entirely unknown vascular system in animals, and later in man - the lymphatic." (Meisen, p. 25). He was a hugely influential and extremely productive man. Apart from his seminal discovery of the lymphatic system, he wrote a number of highly influential treatises, published a series of very influential anatomical papers, published his vast correspondence with other scientists, which has the character of a scientific archive at a time when there were not yet periodicals of natural science, provided us with the most extensive information about medicine in Denmark and about the conditions of the physicians, called attention to the significance of pathological anatomy, etc., etc., and "[y]et the greatest importance is to be attached to his "Acta medica philosophica Hafniensia", in 5 volumes, that was published from 1673 to 1680, when he died. It is a scientific periodical, wide in its scope, one of the first of its kind." (Meisen, p. 28).

"The Copenhagen biologists, under the quickening influence of Thomas Bartholin, produced five volumes of transactions known as the Acta medica et philosophica Hafniensia, which is now very rare." (Hagenströmer)

The leading contributors to the periodical, besides Bartholin himself, was the great Niels Steensen (Steno), Holger Jacobsen (Jacobaeus), Caspar Bartholin, Ole Borch (Borrichius), Ole Worm, Simon Paulli, Johan Rohde, Caspar Kölichen, etc., but the contributions were not confined to Danes or Scandinavians. For instance, the English anatomist Edward Tyson (1650-1708) also published here, as did several other internationally famous physicians and scientists.

Interestingly, the "Acta Hafniensia", as it is known, has a great focus on the odd and curious, the astounding and marvelous, the unnatural and abnormal. Thorndike claims that "Monsters and freaks of nature receive perhaps the most attention." (vol. VIII, p. 234). However, the journal was far from limited to this.

"Thomas Bartholin describes the male mandrill illustrated by three anatomical plates (Male genitalia) and a figure of the entire animal, which had died of disease in the Royal Menagerie. Holger Jacobsen describes the scorpion, the salamander, snakes, several birds, the heron and the parrot (based on dissections and figures by Steno). He also investigated the fascinating and unique anatomical puzzle of the tongue of the black woodpecker (with plate). He gives an exceptionally interesting account of the mole cricket, Gryllotalpa, which is important as being one of the first in which the elongated segmental heart of insects is described and figured. This memoir is a commendable piece of zootomical research, and it is all the more outstanding because the subject of it was an invertebrate (Cole).

The most outstanding contributions in the entire periodical, however, are the 12 by Niels Steensen (Steno), which are all printed here for the first time. Steensen was the most gifted of Bartholin's disciples, and when he returned to Denmark in 1672, he immediately took up anatomical demonstrations and dissections, the fruits of which he published here, in the first three volumes of the "Acta Hafniensia". His contributions constitute important finds in the fields of The Brain, The Heart, The Muscles and General Embryology.

"Steno's dissections of the muscles of the eagle, Aquila (1673) is one of the most remarkable essays in zootomy published up to his time, and it is perhaps more detailed and reliable than almost any other." (Cole). (Gosch 24).

In the paper "Embryo monsto affinis Parisiis dissectus" (Gosch 15), we have the first known description of the "tetralogy of Fallot" (Garrison & Morton no 2726.1).

"Bartholin was the most celebrated physician of his period in Denmark and perhaps in all of Europe. He was professor of anatomy at the University of Copenhagen and later became Dean of its Medical Faculty. The publication seems also to have associated with the activities of a scientific society, although there seems to be little evidence for Neuberger's statement that the "Acta" were the proceedings of this society. The preface to the translation of the "Acta" which are included in the "Collection Académique" gives the following account of its origins:

"The Academy of Copenhagen was founded by Frederick III, who was aware how much glory it brought to him and to Denmark by encouraging the sciences and by attracting and holding scientists in his kingdom. One finds little to clarify the history of this academy, even in the five published volumes. The editing of the memoirs was principally under the care of Bartholin, the first Dane to publish medical observations. His aim was first to make a collection which embraced all parts of science; but, deterred by the immensity of the task, he limited himself to the different parts of medicine and to those observations that were offered to him. His sponsor was Count Griffenfeld, the grand chancellor of Denmark, who obtained an edict enjoining all Danish physicians to render exact correspondence with the Dean of the Faculty of Copenhagen and to inform him of all singularities in medicine and natural history observed in different parts of the kingdom. Bartholin had great hopes for this collection and one can truly find in the five volumes which he published many discoveries which would have been lost or perhaps not have existed if this correspondence had not brought them to light and encouraged him."

The "Acta" consisted primarily in short original observations on medical and natural scientific subjects, although it also contained a few abstracts of books." (Kronick p. 81).