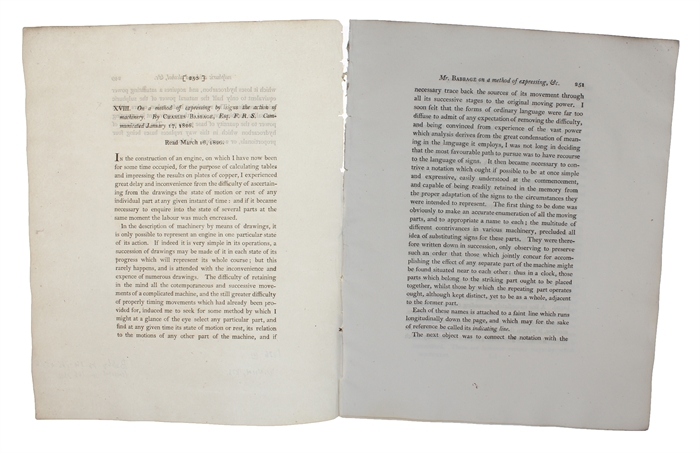 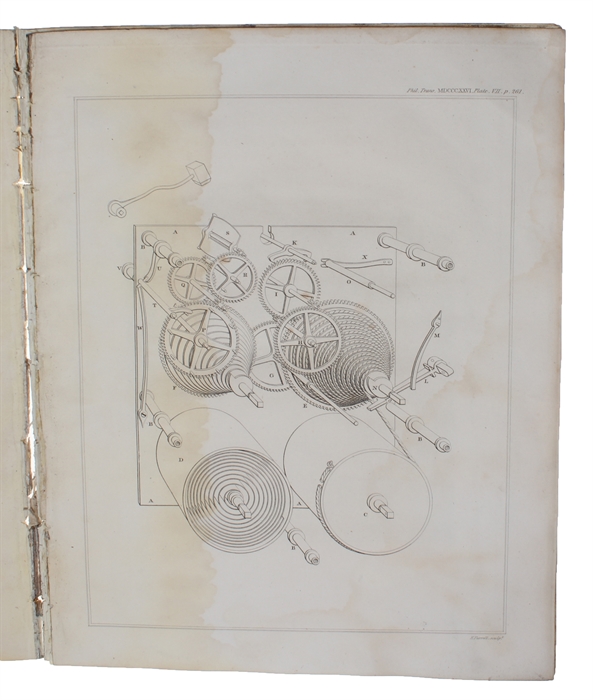 BABBAGE, CHARLES. - THE LANGUAGE OF THE COMPUTER INVENTED.

On a Method of expressing by signs the action of machinery. Read March 16, 1826.

4to. No wrappers as extracted from "Philosophical Transactions" 1826 - Part III. Pp. 250-265 and 4 engraved plates. Some faint dampstains to plates. One plate with a small tear, no loss. the same plate some creasing at upper part, verso of plate somewhat soiled. Page 261 with some marginal brownspots and some soiling. The other leaves clean and fine.

First appearance of a main paper in the history of Computing Science in which Babbage set forth some of the basic principles that guide modern computers.
"Babbage's first publication of his system of mechanical notation that enabled him to describe the logic and operation of his machiness on paper as they would be fabricated in metal. Babbage later stated that: "Without the aid of this language I could not have invented the Analytical Engine; nor do I belive that any machinery of equal complexity can ever be contrived without the assistance of that or of some other equivalent language. The Difference Engine No.2...is entirely described by its aid." .
Babbage considered his mechanical notation system to be one of his finest inventions, and thought it should be widely implemented. It was a source of frustartion to him, that no other machine designerr adopted it (probably because no ther engineer during Babbage's time attermpted to build machines as logically and mechanically complex as Babbage's. More than one hundred years later, in the 1930s, when development in logic were applied to switching systems in the earliest efforts to devwelop electromechanical calculators. Ckaude Shannon demonstrated that Boolean algebra could be applied to the same types of problems for which Babbage had designed his mechanical notation system."(Hook & Norman No. 37).