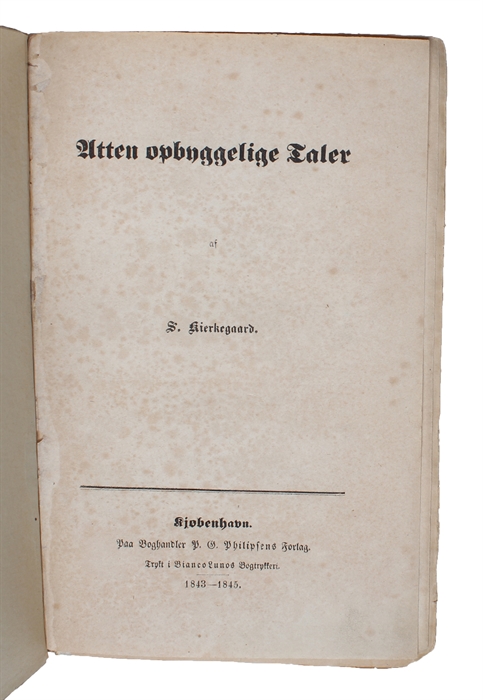 Kjøbenhavn [Copenhagen], P. G. Philipsens Forlag, 1843-1845. 8vo. Bound uncut in a recent pastiche cardboardbinding, imitating the original brown cardboard binding, in which it was issued. Printed pastice paper label to spine. Some brownspotting as always, due to the paper quality. (4), 52, 62, 84, 59 (recte 57 pp., i.e. without the blank leaf between the title-page and the preface), 70, 111 pp. Complete with all the titles and the joint title-page (without the blank leaf after the preface of "To opbyggelige Taler, 1844" - which is not called for and hardly ever present).

The first upbuilding discourses were published the same year as Either-Or, and it is interesting to note that in opposition to his major philosophical works, the religious upbuilding discourses actually bear the name of the author on the title-page, a fact that was by no means incidental. While the pseudonymous works could make one doubt the religiousness of the author, the parallelly written religious discourses stress the fact that we are dealing with an author, who was religious from the very beginning, a fact that Kierkegaard also wished to establish himself; in his journals he clearly states that the religious discourses bear as much significance for his work as a whole as do the larger pseudonymous works, "I began with "Either-Or" and two upbuilding discourses..." he says, and explains that he intended the upbuilding, the religious, to advance, and that he wanted to show "that the writer was not an esthetic author who in the course of time grew older and for that reason became religious" (Journals, IX A 227).

The importance of the upbuilding discourses and the close relationship they have with the major works and Kierkegaard's philosophical development also becomes evident with the fact that every pseudonymous work was accompanied by a little collection of "upbuilding discourses" until "Concluding Postscript" appeared.