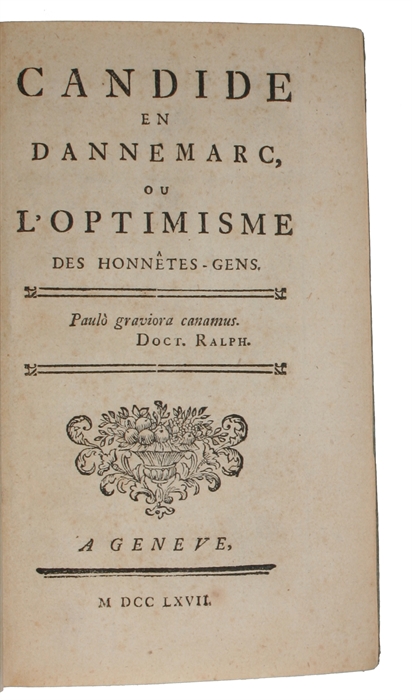 CANDIDE IN DENMARK - WITH A SATIRE ON ROUSSEU

Geneve, 1767. Original blue cardboard binding with contemporary handwritten paper title-label to spine. Pencil-numbering to inside of boards. A very nice and clean copy. Woodcut vignette to title-page. With the ex-libris of the notes Danish book collector K.F. Plesner to inside of front board.

Rare first edition of this interesting, anonymously written continuation of Voltaire's Candide, which wraps up the adventures of the hero.

"Turning his back on both Voltarian satire and scepticism, the novelist proposes a moralistic fable - the focal point of which is a rehabilitation of Leibniz's Theory of Optimism. The main body of the novel tells the story of Candide and his new wife, the noble Zénoïde, in their sumptuous Copenhagen townhouse. Before achieving this happy state, however, the couple endures various trials and tribulations reminiscent of the newly minted gothic genre. "Candide au Dannemarc" also features a satirical portrait of Jean-Jacques Rousseau." (Éduard M. Langille, from the introduction to the new edition of "Candide au Dannemarc", edited by him).

Voltaire's "Candide" had inspired a sequel that appeared in 1760, which is attributed to Charles-Claude-Florent de Campigneulles, but which might be by Henri-Joseph du Laurens. The present work is a direct continuation of that sequel (although it ignores the happy ending of the previous work), but evidently from the preface, it is not written by the same author. It has still not been determined who the actual author is.

The part on Rousseau (pp. 148-167) in the present work has become quite famous, portraying him satirically as trying to make a living in Copenhagen from copying music while plotting to escape to America. The novel ends with Candide leaving Denmark to be the Danish ambassador in Russia.

A secoond edition appeared in 1769.