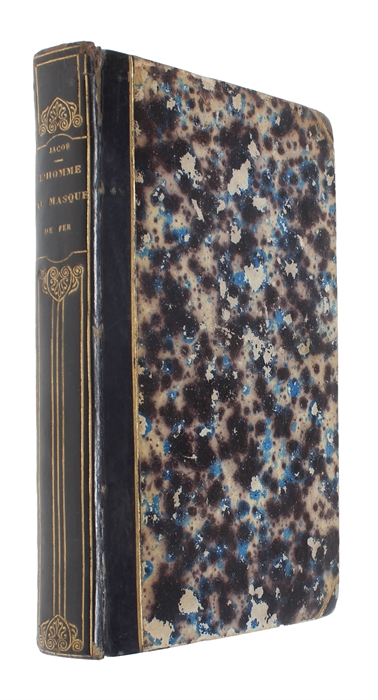 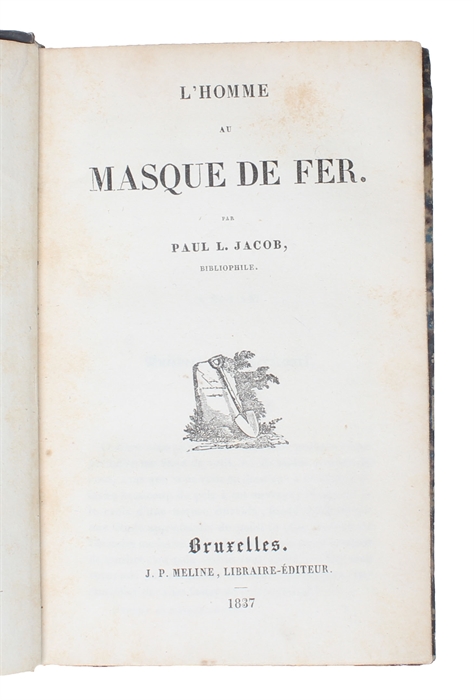 Rare edition of Lacroix's interesting book about the Man in the Iron Mask, which is a heavily discussed theme in French litterature. During the reign of Louis XIV, the mysterious man in the iron mask, the face of whom nobody saw, was kept prisoner in a number of jails, among these the Bastille, in the last half of the 17th century. According to Lacroix's theory, the Man in the Iron Mask was Nicolas Fouquet, who was imprisoned in Pignerol in 1665. Fouquet (1615-1680) was Viscount of Melon and Vaux, superintendant of finances to Louis XIV and protector of writers and artists, untill he fell in ill grace in 1661, was imprisoned and died under mysterious circumstances.
Paul Lacroix (1807-1884) is renowned for his several important historical works and his numerous works of bibliographical contents, regarding which he can be said to have continued the tradition of Nodier. He wrote a number of historical novels, which were very popular at the time. They were reprinted numerous times, and were translated into several languages. Most of his works are published under pseudonym, because of which he is now best known under the name of "Bibliophile Jacob". Aged 28 he was awarded the cross of the "Légion d'Honneur" for his work on the history of the 16th century, and 1842 he founded "L'Alliance des Arts" together with M. Thoré. Apparently the first edition, which is quite scarce, appeared in Paris in 1836. Not in Carteret.